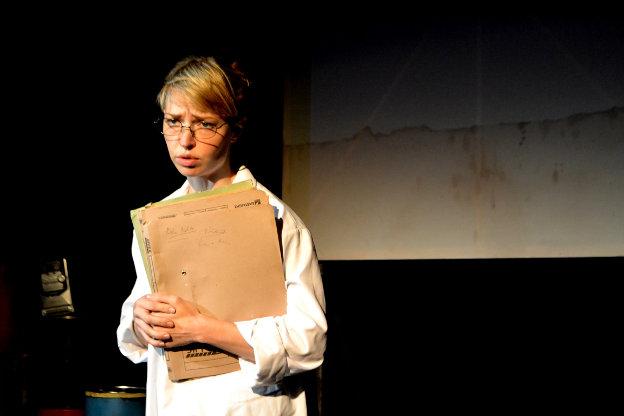 It’s always refreshing to see young artists ready to take on the issues of the day – be they political or ethical – bringing them to the stage, and discussing them in a provocative and clever way. NOLA is a courageous play, a verbatim piece that sheds a great deal of light on the subject of the devastating BP oil spill in 2010 in the Gulf of Mexico.

On 20 April 2010 an explosion on the Deep Water Horizon drilling rig killed eleven men, injured seventeen others, and sparked the largest marine oil spill in history. For three months, 4.9 million barrels of crude oil flowed into the Gulf of Mexico and across 125 miles of Louisiana coastline. The state of Louisiana relies on two key industries: seafood fisheries and oil, and both were devastated in very different ways.

The personal stories of loss (of life, of income, of community resources) is at the heart of the piece, which uses the small personal stories as a foundation on which to build the global concerns. NOLA deals with real facts and real people, but of course despite this ‘reality’ we are aware that this is a theatrical construct, a work of art not ‘documentary’. We always have in mind that the storytelling is a reconstruction of memories, and even if told verbatim these memories can be very tricky and unreliable, contaminated with momentary sensations and needs. That said, the very many voices heard – from bereaved father, to fisherwoman activist, to oyster-catchers with no oysters left to catch, to wriggling politicians, to media reporters, to environmental experts, to the wildlife conservationists washing the oil-caked birds – all collectively add up to a very true and real picture.

Despite the serious intent, the art also shines through. We are, for example, captivated by the way that the verbatim interviews are worked into a dramatic structure, just four actors taking on scores of different characters, each with their own distinctive voice and mannerisms. We are affected by the personal stories and tragedies, and by the way each of those people reacted to the terrible events and somehow kept going.

It’s a theatre piece with no dialogue, no linear narrative, and no climax – the climax happens before the beginning of the story, with the accident itself – yet it still works beautifully as theatre. It succeeds admirably in giving us the opportunity of building for ourselves a picture of the whole accident and its terrible consequences. One of the best things about the piece is that it is very economical in showing real images. These, when they appear on the screen at the back of the stage, are like glimpses of a nightmare everyone wants to forget.

The performers are all very sure of what they are proposing – very conscious of a sharp line between interpretation and presence on stage, or between building a character and assuming the manners of a person that has been interviewed.

The only thing that, maybe, could be improved on – or more accurately developed – is the scenography. The stage set is a collection of oil barrels of different sizes, and this seems the most obvious choice rather than the best solution. The play is so sophisticated in terms of its aesthetic and dramaturgical choices that the scenery, in some way, diminishes its potential. It should, because it deserves it, be staged in a much more sophisticated and clean set.

This aside, NOLA is certainly a vivacious and dynamic work that talks about a difficult subject without being boring, and without either berating or patronising its audience. 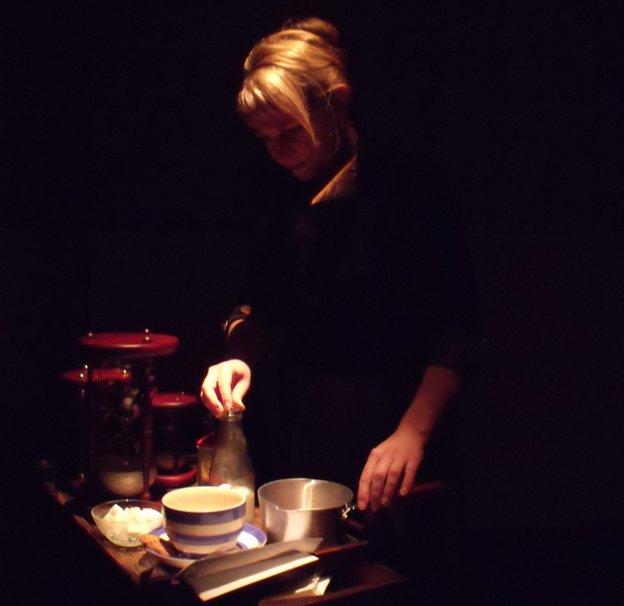 Donna Rutherford, caught between memories of the past and projections of an uncertain future, dives into a subject that most people simply try to ignore: the inevitability of becoming old, the rapid passing of time, like the sand in an hourglass; and the shift in the parent/time relationship – specifically, that moment when the natural order seems to reverse itself, and the son or daughter becomes the father or mother of those who once raised them.

Kin, which describes itself as ‘theatre, film, true-life’ is exactly that: a play, a film, a true-life story. Staged with a pleasingly clean-cut scenography and simple set – three TVs and three small tables – the piece sees writer/performer Donna Rutherford present us with six different stories, one of them her own, about how to deal with the ageing of our parents, facing that moment in life when a previously strong and giving person becomes, day by day, slower, more vulnerable, and ever more dependent. There is no character construction – the performer appears as herself, as do the other five guest performers who we meet on-screen.

These five stories from other people are presented as recorded interviews, shown throughout the play, exposing the vulnerability of each person, and the intimacy of their home-life with their parents, as they share precious moments of daily life. The five interviewees are all established theatre-makers who will be familiar to many Total Theatre readers: there is Claire Marshall and Cathy Naden from Forced Entertainment, actor-director Alison Peebles, Richard Gregory from Quarantine and Tim Ingram from Reckless Sleepers. Each gives the audience the gift of their sincerity, their stories offered with no trace of shame or pride in the discussion of this difficult subject, talking freely about their relations with their ageing parents and the fact of getting older themselves.

As the play progresses, Rutherford moves from one table to another, sometimes preparing tea or coffee, or interjecting a small speech or song offering her own observations. Each table has an hourglass upon it, iconic markers that Rutherford turns over at the beginning, bringing time as a real and formal presence into this 60 minute show. The audience literally watches time going by in this atmosphere of intimacy where secrets can be shared.

Facing such a strong work it is hard to tell what makes it, sometimes, a little inconsistent. What occurs to me is that maybe Rutherford should have been as courageous in her aesthetic choices as she was in choosing to deal with such a difficult subject. There is something a little twee about the teatime tables and matched fabrics that perhaps signifies ‘old age’ a little too obviously, and thus diminishes the power of the play. Maybe all of this could be less staged, less beautiful?

Despite this, Kin is a touching play – subtle, delicate and facing truths not often told.