Rain, wind, sunshine, hailstones – and all within the hour. Ah yes, the great outdoors in the UK in May!

The Without Walls programme brings a number of outdoor arts commissions and other shows to a consortium of festivals across the UK. Brighton Festival opens the season – and being so early in the year, there have been many previous occasions when play has had to be stopped due to the weather, as happened this year, when four shows were presented on the lower promenade by Brighton beach on Saturday 11 May. And as the programme was confined to one day rather than two (as has been the case in past Brighton Festivals), there was no second chance to see the work another day – although there were multiple showings throughout the day.  I was unlucky in picking the afternoon, I believe all four shows went ahead in their morning or lunchtime slots.

So there was a lot of disruption – but over a three-and-a-half hour period between 3.30 and 7pm (which included a fair amount of gaps spent huddling under cafe awnings), I did manage to see two of the shows in the programme, and a short excerpt of a third one.

In the order seen: first up was Talawa Theatre Company with The Tide. 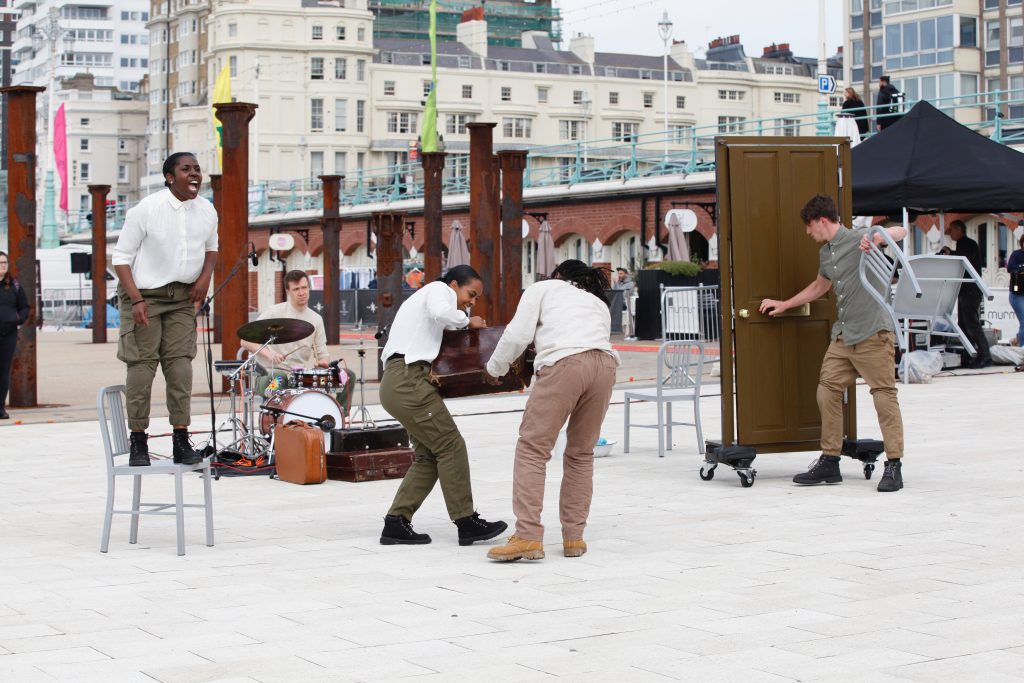 Co-created by writer Ryan Cameron and choreographer Jade Hackett, The Tide ‘explores the narratives and experiences of migration within The United Kingdom whilst holding a mirror to an evolving British culture… it unpicks the stories and imagery of the most pertinent issue of our era: migration.’

I like the design and scenography: a moveable door (number 10!) through which arrivals and departures take place; the inevitable vintage suitcases (no physical theatre show complete without one – we’ve all done it!); simple, neutral coloured costumes, with a variety of extras such as blue silk scarves becoming sashes, turbans, sarongs, and cumberbands; tin bowls and jugs used for a nicely enacted sequence of ritual hand-washing, gently drawing in some audience members; chairs that turn into barrow-boy stalls (‘English spuds!’ ‘20 mangos for a pound!’) or political soap-boxes. Jade Hackett’s choreography is fine, featuring some nice hero/chorus ensemble work, and a few intensely acrobatic moments. There’s a drummer, whose percussive riffs work well with the live action and merges with the pre-recorded music (guitar, bass and keyboards) that comes in later in the piece. There are some good characterisations by the cast, who play a multiple of roles, representing a diverse range of migrant experiences, with an enjoyable babel of languages emerging as a kind of grommelage undercurrent, rather than a spoken text we need to hear clearly.

But the dramaturgy of the piece is unclear. Yes, I get the broad brushstrokes, and there are some lovely details, as listed above – but the show doesn’t really have the drive and oomph needed for street work. A scene about citizenship and taking the oath of loyalty to the queen comes across as too simplistic a parody, and it doesn’t seem to say anything much beyond the obvious, which is that citizenship tests are silly. In the final five or ten minutes, the piece really comes to life – and this is because we suddenly get the extra element of a very beautiful pre-recorded spoken text coming into the mix and holding the space – a poetic reflection that gives a much needed extra layer of depth and meaning: ‘This is my home. The bruises are fading, but some scars remain’ says the voice. There is now focus, and a unification of all the elements of the piece. Talawa are a highly experienced company who have a strong track record of indoor theatre work covering three decades, but The Tide feels like a show made by people who do not yet fully understand how to structure and formulate an outdoor piece. It is praiseworthy that Without Walls want to encourage more theatre-makers into outdoor arts – but it also feels important to acknowledge that making indoor theatre and making street theatre are, in fact, two quite different things.

I then made my second attempt to see On Edge by Justice in Motion – the earlier scheduled show was called off, as even though rain had stopped, the ground and scaffolding set were deemed unsafe for the performers, and of course safety must be paramount, but after Talawa’s show ends, they make the call to try again, and we are summonsed back to their site, on the other side of the i360 tower. 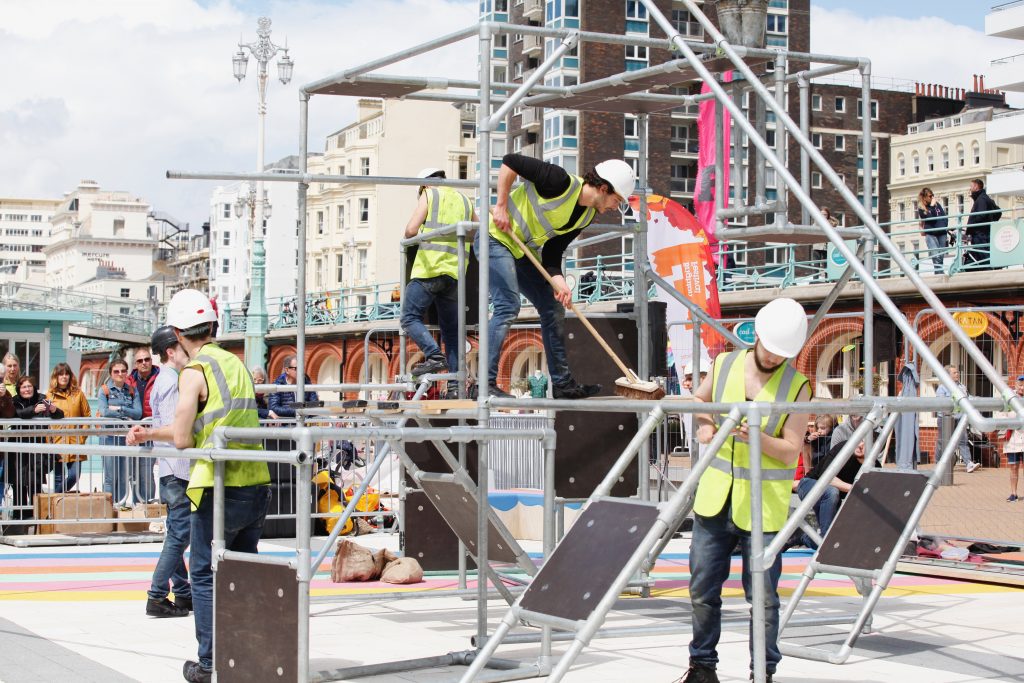 And we’re off, hurrah! A man sits on the top of the scaffolding. He consults what looks to be a map, and is moved around on sections of the set that come apart, to represent (I presume) vans and trains carrying him across continents. At least, that’s how I’m reading it – the rather swanky programme says the piece is about the construction industry as a site of modern day slavery, and I’m thinking about the sections of Sunjeev Sahota’s book The Year of the Runaways which detail Indian migrants’ experiences on building sites in the North of England. Our protagonist removes his civvies, and is decked out in a workman’s hi-vis vest and hard-hat, joining the construction team. We are just moving into a more dynamic ensemble dance/parkour section – and this is a big ensemble, eight men drawn from the UK, Germany, Switzerland, and Spain  – with what seems like is going to be a Meyerhold type ‘humans forming themselves into one big machine’ section – buckets swinging from feet to hands, bodies turning around metal poles – when down comes the rain. And that’s that. They call off the show, take a bow – and we all wander off, disappointed. So, impossible to offer much critical opinion having only seen a third of the show, although going on what I saw, I fear it may possibly have suffered from some of the same problems as The Tide, in attempting to deal with ‘serious issues’ in an accessible way, but ending up being a little over-simplified. But I am aware that it may well have shifted radically as it progressed – who knows what I missed seeing? Also to note that this is another experienced company making their first outdoor show… 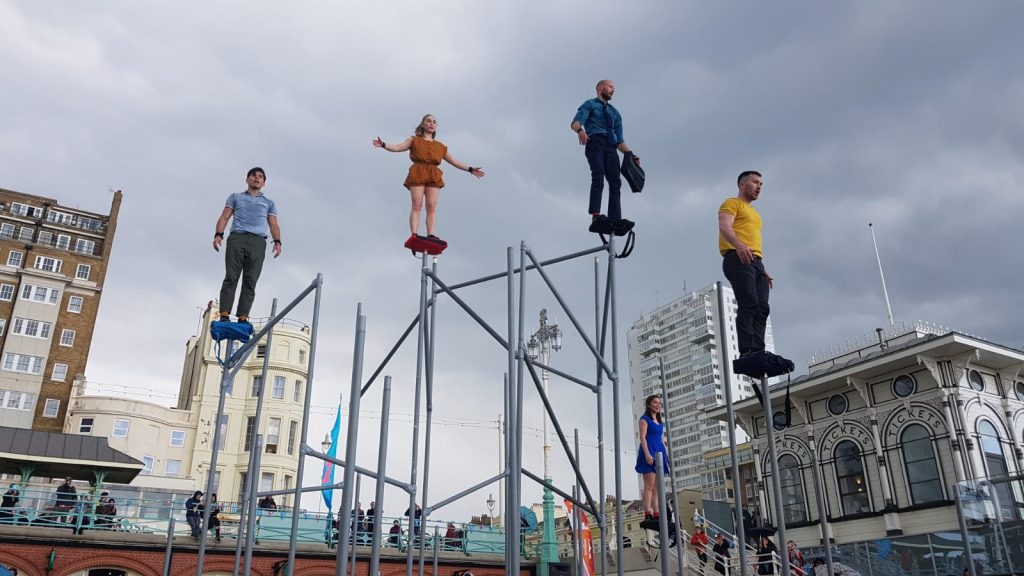 I shelter for a while, then as the rain eases off, move over to the next stage area, which also has a set made of metal poles – this for Without Walls regulars, Motionhouse, with Wild. Will they be going ahead? Sadly no. Hopefully I will catch them somewhere else this summer, and learn what it is to be wild.

One thing strikes me about this year’s programme, which is that all four shows being presented on this Without Walls day are static, movement-based pieces – and three of the four shows involve metal scaffolding structures. And if we think about this for a moment, we’ll realise that if anything is going to be seriously affected by rain, it is a static, movement-based show that involves a big scaff structure, which will of course immediately become slippery, even in light rain. I’m not for a moment saying these shows shouldn’t be programmed – they should, as there is always the ‘what about the weather?’ question in British outdoor arts, and this is the risk any of us working in street theatre take. But perhaps there could be more thought about the combination of work programmed on one day, so that shows that are a little more weather-resistant are included in the mix… 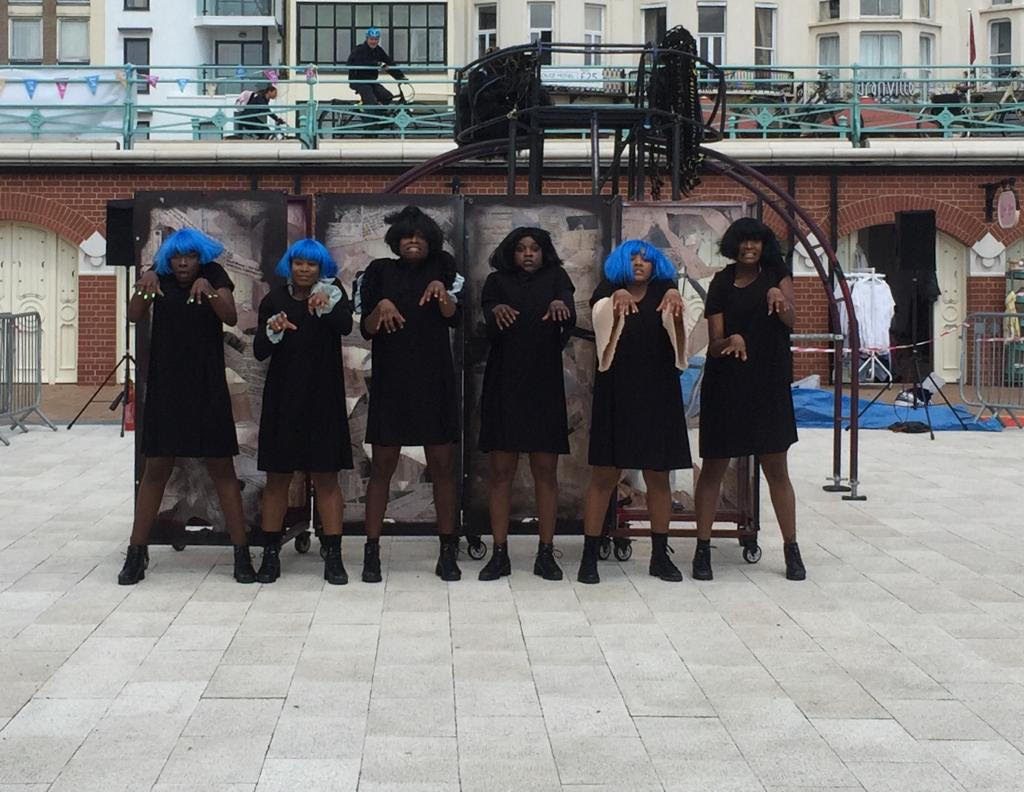 But back to the day’s programme: further east, we have the staging for Initiative.dkf:’s Scalped in place, also featuring another kind of metal structure. They are scheduled in for 6.30, but there are rumours that because of the cancellations of other shows, Scalped might be brought forward, if it happens at all. It’s now 5.30, so it’s time for tea, drunk huddling under a cafe awning, hoping that the show will go ahead.

And – yes, they are, bravo! The performance area is being swept by a team of broom and mop pushers. A crowd gathers slowly (nothing like people sweeping to attract a crowd) and after a couple of technical hitches, it starts.

What a show it turns out to be – it is well worth the wait. Exploring and confronting ‘life as a fashion show’ Scalped is a collaboration between creative producer Wofai and movement director, writer, and co-producer Damilola DK Fashola. It takes as its starting point the assertion that: ‘For black women one of the most common shared experiences is a passive but ever present scrutiny. From what you wear to the way you walk, and most especially hair. Whether permed, braided, or in locs, black hair is “political”’

Scalped is a brilliant example of work that can tackle a serious issue whilst staying accessible and entertaining. Grace Jones is a cited inspiration – but I can also see parallels with Liz Aggiss’s Grotesque Dancer in its adventurous and humorous bringing together of popular dance with a kind of vaudevillian expressionist angst. It is performed by six feisty young Black women, who collaborated on the creation of the piece.

They start the show standing or lying still in distorted Fosse-esque poses, as words tumble from the speakers: ‘Oh, your hair looks really funky today, innit… Yeah, really suits your personality… Only you could pull that off… Can I touch it? Is that real?’

Which is an opportunity to say that the soundtrack (by Tyrone Isaac-Stuart) is brilliant, mulching together a whole array of fabulous dance tracks and found sounds with spoken word, using cut-ups and edits to create really rich and resonant sound motifs. I love the slowed down Spice Girls, for example. ‘Tell me what you want, what you really really want…’ emerges as a monster’s groan, as the women sculpt their faces into fabulously horrible gargoyle gurns. Paulina Domaszewska’s costume design is brilliant – they start in little black maid dresses with cream collars and cuffs, progressing to Move Up to the Bumper figure-hugging black ciré, and pale pink and black space-age circus leotards, with a fashion-show-worthy finale (on that metal structure, which is otherwise not used very much) in ever more eye-catching wigs.

Most importantly, this is a show that works well outdoors – very well. The blazing soundtrack, the clever choreography, the intention, the delivery – it all comes together brilliantly. The performers milk every moment – they play to the crowd and with the crowd. They are down on that hard, wet ground getting their knickers muddy with ne’er a care in the world. They strut and stride and twerk and groove with endless energy, then they flow and flock and pose effortlessly with elegance and grace. There is a constant, witty interplay between the soundtrack and the physical performance. The movement direction gives us a pleasing evolution of shapes, patterns, groupings, using the three sides of the performance space with a clever awareness of the dynamics of outdoor space and relationship to audience. It’s an object lesson on how to perform in the street, restoring my faith in outdoor arts. I skip away energised – let it rain, let it rain, let it rain!

Brighton Festival is a partner in Without Walls, working with festivals and artists in bringing outdoor arts to people in towns and cities across the UK. Other festivals presenting a Without Walls programme include Norfolk and Norwich Festival, Greenwich + Docklands International Festival,  Winchester Hat Fair, Just So, and Stockton International Riverside Festival.

Other outdoor arts shows presented in Brighton Festival are Luke Jerram’s Museum of the Moon, 17–20 May 2019, Queens Park Brighton, and Thingumajig Theatre’s Ghost Caribou, 18 May, also in Queens Park (Ghost Caribou is supported by Without Walls). Also supported by Without Walls: Upswing’s Catch Me, and Apocalyptic’s Circus My House both appear on the Our Place programme, on 18 May at Manor Gym, East Brighton; and at Hangleton Community Centre on 25 May.