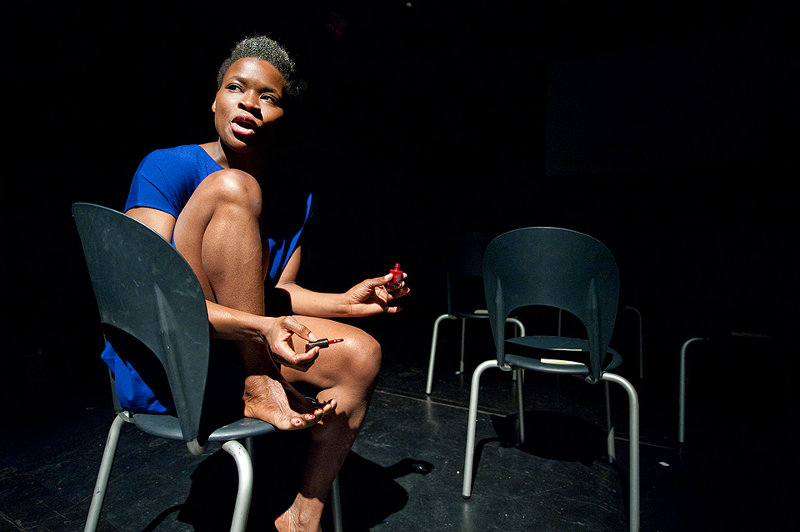 Two years ago a friend lent me a book called The Immortal Life of Henrietta Lacks by Rebecca Skloot. It tells the incredible story of Lacks, a woman who has affected all of our lives in some way, without us and, for many years, even her family knowing. Unknown to Lacks, a doctor took a sample of her cells whilst she was having a biopsy (which revealed a fatal cancer). Dubbed HeLa, this specimen multiplied and has since been used to create a cure for polio, experiment with the creation of IVF treatments and AIDS research, experiment with cloning, and countless other monumental scientific achievements.

Inspired by this book, writer and performer Adura Onashile has created an urgent piece that beautifully brings this woman’s tale to theatrical life. Staging the piece in a perfect venue – the Anatomy Lecture Theatre at Summerhall – Onashile begins as if she is lecturing us. We peer down on her like a specimen as she chalks the names of the scientists who have won Nobel prizes and become very wealthy as a result of their use of HeLa cells. Over sixty minutes that whiz past as if it is half the time, she inhabits the character of Lacks, her daughter Deborah, and the nurse who first sliced that cell, not stopping to think about Lacks as a real woman with a family and a history.

Onashile is utterly compelling; she is raging against the racial, social and financial injustices that have played out over sixty years. Every muscle in her body spasms as she lays on a cold metal bed in a beautifully choreographed repeated movement sequence that invokes the pain inflicted upon Lacks and her family as a result of actions that were completely out of their hands. Crucially, Onashile never shrieks in rage. Instead, her performance brims with an infectious energy that drives the story forward without any wallowing or showiness. It is the best performance I have seen at the festival, filled with humble integrity and utter conviction.

Director Graham Eatough drives the piece forward at breakneck speed. Projections of 1950s hospitals and scientific tables briskly interrupt scenes; Simon Wilkinson’s lighting sharply cuts into the space, flinging Onashile into another chapter of the spiralling tale. The entire performance beautifully echoes the ever multiplying HeLa cells, which also begin to take over the ceiling of the space courtesy of Mettje Hunneman’s delicate video designs.

If you missed the show in Edinburgh make sure to pick up a copy of the book, and hope that Onashile and her team have the opportunity to continue telling this important story beyond the festival.