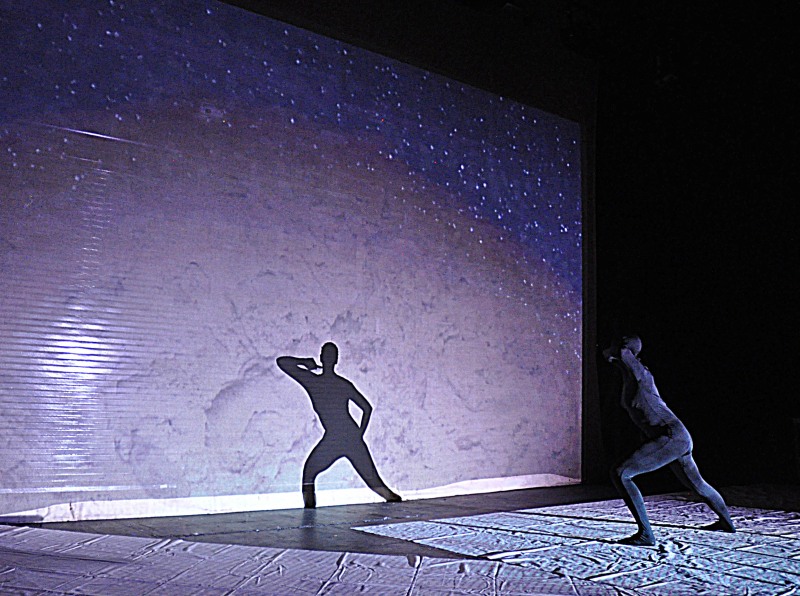 Arcos have created a complex and multilayered show, rich in resonances and yet baffled by its own complexity, feeling like a trio of disparate shows bolted together. There is a philosophical response, a multimedia solo show exploring family history, and a dance piece which sits in relation to the other two.

It starts with a section playing with the ideas present in the story of Plato’s cave, in which morph suited shadows dance amid counterparts projected on the vast white screen at the rear of the stage. This turns out to be a prelude and its relevance to the following work is never quite made clear.

The choreography is at once flowing and martial, enlivening the delivery of the narrator which at times feels overly earnest and simplistic. Points better left to the imagination and intelligence of the audience are stated with a deadening clarity, denying our intrinsic responses. The control and precision of the dancers serves the emotional core of the story of post-war lovers. Indeed, the narrator expresses himself to best effect when playing the keyboard which often provides the audio landscape for the dancers. In these moments everyone on stage feels connected and the piece works very well.

The extensive use of projections, on multiple surfaces, is interesting and playful, although at times just a little too clever, such that the formal or technical aspect takes over from the storytelling. Overall there is the feeling that a focused and perhaps slightly ruthless dramaturg might perform a few necessary surgical extractions, bringing space to the work and allowing the audience to more fully inhabit the world being created.