Duška Radosavljević is a dramaturg, writer and lecturer in Drama and Theatre Studies at the University of Kent. She is the author of Theatre-Making: Interplay Between Text and Performance in the 21st Century (2013) and editor of The Contemporary Ensemble: Interviews with Theatre-Makers (2013). She also writes for The Stage newspaper and Exeunt magazine. 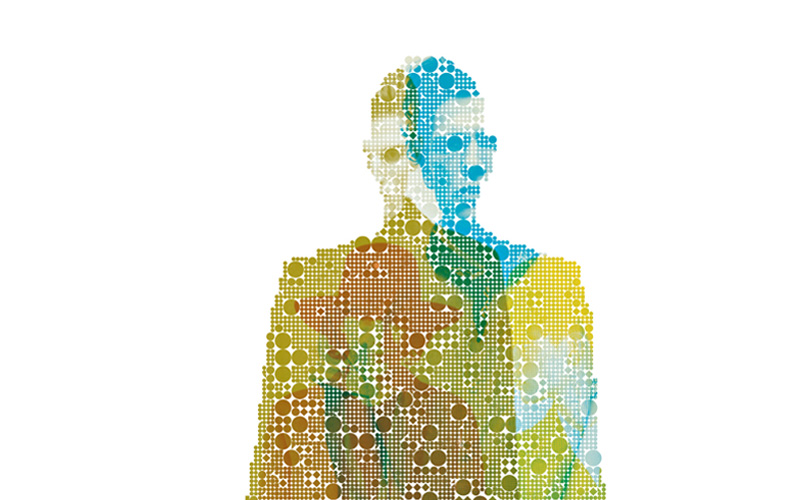 The audience members pour out elated after this show. ‘That was amazing,’ one of them enthuses – incidentally the one who has actually taken part on the stage. ‘It’s one of those shows that’s going to be difficult to describe to people,’ says his friend. ‘One of those indie shows,’ they conclude.

Those already familiar with Nassim Soleimanpour’s 2012 hit White Rabbit Red Rabbit – which saw various famous actors take part without any rehearsal whatsoever – may not be surprised to learn that this piece too will keep us all on our toes. This time however, the Iranian playwright and the British director Ramin Gray contrive to turn the audience members into the main actors, helped along by a lone stage manager. The author is present as a recorded voice played back for the duration of most the show. This provides the story of a man with deteriorating eyesight trying to read Hamlet before he goes blind, interspersed with instructions for some games he has devised for the audience to play (often with their eyes closed).

This type of work is not entirely new in the UK – Rotozaza and Tim Crouch have played with similar conventions, moving the boundaries of what the audience might have thought possible in theatre and live performance. The interplay between the pre-recorded and the live, the preplanned and the spontaneous, creates a suspense and keeps the audience invested and involved. The point is that the result of this kind of experience strips the notion of theatre-going to its bare bones – imagination, conflict, play – elements which have been there for ever.

So the most important thing to say when describing this show to your friends is that this is a kind of theatre which restores joy to the often dreaded act of audience participation. And the reason is that we all go to the theatre wanting what we are seeing to succeed. Soleimanpour and Gray show us that if you lead the audience to believe that the success of the show really depends on them, they will be more than willing to help along.

Blind Hamlet is not entirely flawless – its narrative flow is occasionally contrived and sometimes the pre-recorded voice is pitched precariously between its desire to communicate (‘I wish I could see your face’ is the refrain of the opening section) and a radio drama style introversion. But its ambition and its overall achievement outweigh this. 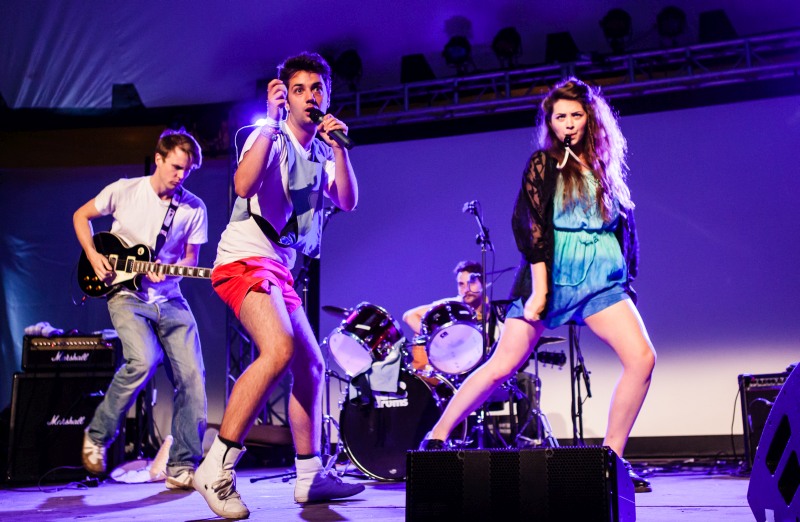 It’s not often that you walk into a music gig headlining a playwright. Or three. Although if you ask me, I would bet my bottom dollar most successful theatre people were at one point or another wannabe rock stars. Often they simply took that energy and transferred it into the language of theatre, never again getting the chance to brandish their electric guitars, drum sticks, or microphones, but here is finally a welcome exception. A band of three writers (Tom Wells, Ella Hickson, Nick Payne), a composer (ED Gaughan), a director (Joe Murphy), and four excellent multi-skilled multi-tasking actors (Jack Brown, Katie Elin-Salt, Liam Gerrard and Iddon Jones) showing us just how much great ensemble work owes to music itself.

The set consists of three stories, mostly underscored and interspersed with narrative-driven songs, deftly woven together into a single piece which coheres around its symphonic throughlines rather than a single theme as such. Though if a theme does emerge, it has a lot to do with overcoming loneliness. In the first story, a fifteen year old asthmatic boy Jonesy resolves to overcome his isolation by becoming a sporting hero; in story number two an awkward Londoner loses a fellow commuter he secretly fancies to another guy; while the finale is a classic will-they-won’t-they get it together love story conceived in the loo of a nightclub. This sort of narrative range also provides scope for similarly broad musical display covering anything from humorous ditties and silly dance numbers to heart-rending power ballads. The obvious showcasing is probably the only thing detracting from the show’s genuine brilliance. But the show as a whole is truly thrilling, its inner magic achieved through the notion of the whole being greater than the sum of its parts.

I will not search for musical references that might entice you to see this show. Suffice it to say that the rhythm section grips you from the start and never lets go – even when the band members begin to rotate their way through the various instruments on stage. If you love theatre and have ever had a band you loved, this is a show for you. 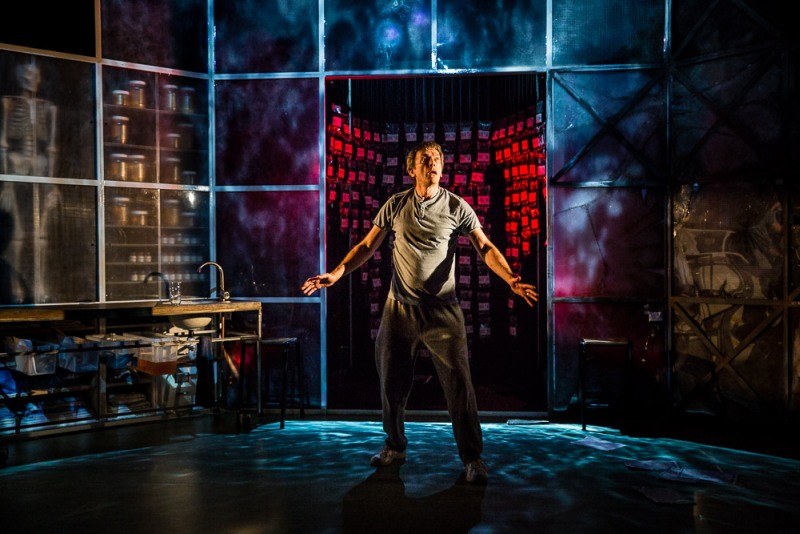 Following in the tradition of the finest testimony-based theatre, Factor 9 gives the stage to the survivors of a 1980s pharmaceutical disaster in which thousands of people worldwide became infected with the HIV virus after taking factor 8 and factor 9 blood products for haemophiliacs. The play, scripted by Hamish Macdonald, is directed by Grid Iron’s Ben Harrison, who returns to Dogstar after his successful collaboration with Matthew Zajac on his fact-based piece The Tailor of Inverness.

Zajac is joined on stage by Stewart Porter, but the real coup this time is provided by highly sophisticated set, video, and lighting design, courtesy of Emily James, Tim Reid and Paul Claydon respectively. This world, made up of plexiglass, carefully frames evocative imagery and is subtly underscored by Pippa Murphy’s music, and even opens up at one unexpected moment to reveal its viscera – a wall made up of hanging blood bags.

Revolving around the members of the so called Edinburgh Cohort, Bruce Norval and Robert Mackie, Hamish Macdonald’s text is research-heavy but nevertheless painstaking and steadfast in its reverence for the victims of the scandal. Managing to pull out and focus on the more poetic content of the play – Bruce’s dreams, or imagined telephone conversations between anonymous authority figures keeping the tabs on the death toll – Harrison paces the stage action with great technical skill and inspiration. Zajac and Porter too are a complementary double act combining thoughtfulness with temperament and finesse with feistiness. Harrison’s stated goal in his programme note – a call for a true dialogue born out of a deep respect for the NHS – is disarmingly honourable too. The overall effect of this ambitious work is deeply touching on many levels, although one wonders whether a more economical and focused approach to the narrative might have yielded a more lasting piece of theatre. 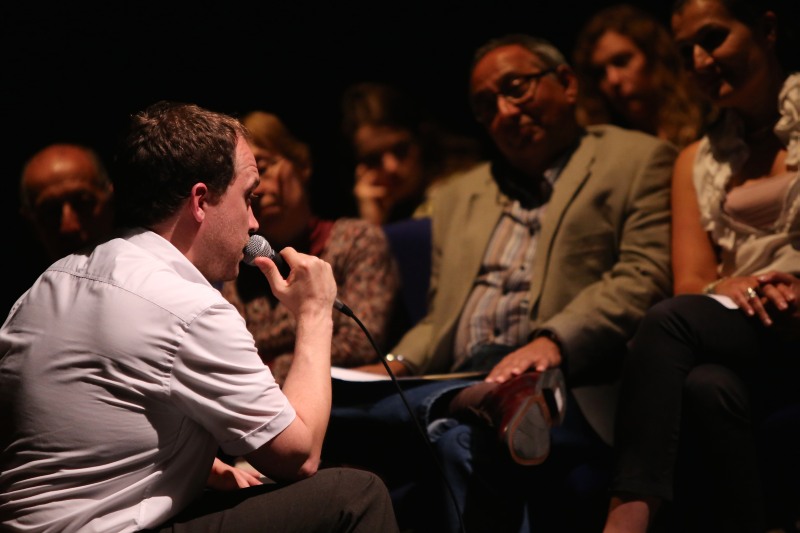 Seeing a chair and a microphone on a bare stage on entering the four-sided auditorium, one might be forgiven for thinking that Chris Thorpe’s interesting-sounding research project into cognitive psychology and political extremism will predominantly take the form of a lecture. He launches into it somewhat agitated, like a man who has lost patience with stupidity and bigotry, and this too seems to limit the number of possibilities as to where the show can go from this point on. A quick demonstration of how the confirmation bias works using numbers and sweets for the participating audience members. A round of handouts with the lyrics to Minor Threat’s Guilty of Being White. A summary of relevant reading around the subject. All lecture material – although delivered with the kind of flair that would have every hungover fresher entirely smitten. But then again, there are really subtle, hardly-perceptible moments of Rachel Chavkin’s direction contained in just how Thorpe handles his props, how he stresses his words as if to bring some minimalist music to it, how he elegantly swishes around the space.

As ever, Thorpe’s writing itself is enticing in its unique combination of the colloquial and the highly poetic, but despite all appearances this not a spoken word gig alone. The core of Confirmation is pure theatre in several ways. First of all there is the subject matter itself, the desire to see the world from someone else’s point of view. Any actor who has ever played a Shakespearean villain will be familiar with the necessity of accommodating intellectual and emotional complexity. Then there is Thorpe and Chavkin’s non-threatening but conceptually necessary involvement of the audience in this exercise of taking on someone else’s part, or to evoke Thorpe’s own metaphor: seeing the world through someone else’s eyes. And finally there is the sense of acute danger created by the masterfully handled levels of tension in the piece. Two thirds of the way in, I caught myself genuinely worried for Chris’s safety, which was the point at which, I realize now, the theatre actually sneaked up on all of us in an entirely novel way.

Ultimately, this is the kind of theatre that can only be made by a white, middle class, near-middle-aged man, but it is bold and subtle and stimulating and – judging by the way in which some very young audience members responded – truly life-changing too.

Confirmation is presented by Warwick Arts Centre and China Plate, and commissioned by Northern Stage and Battersea Arts Centre.