Florence Brady is an actor and singer based in London. Her work favours the interdisciplinary, and the European. She is interested in music theatre, multi-lingual performance, and literary adaptation. Prior to training as an actor, she studied for a degree in medieval literature, the result of childhood spent reading fantasy and watching too much Time Team. 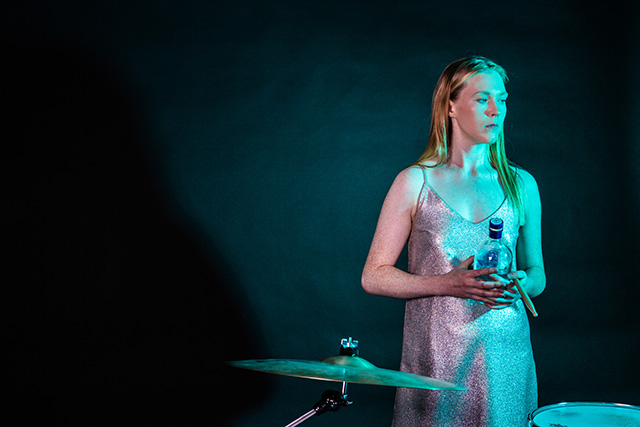 Maxim Gorky’s Children of the Sun (1905) is a play, like many other plays, in which women get talked over quite a lot. Set in the Russian cholera epidemic of 1862, it is a chastisement of a self-absorbed intellectual elite in the wake of an impending crisis. Tom Hughes’ Daughters of the Sun is not an adaption of Gorky – as the show notes state, it is only ‘sort of inspired’ by it – but it is a negotiation of its themes and ideas; an attempt to see, acknowledge and subvert them. Performed by two women, the programme notes lay out Daughters’ aim to question ‘how we relate, or if we should relate at all, to the white-centric, patriarchal history of playwriting’. Whilst never really getting close to the heart of this question, it raises other intriguing issues such as  what does theatre have to be? What does a show have to be about? And how do we place it in the world?

We meet the performers – Rebecca Higham, an actress, and Beth Higham-Edwards, a musician – as they set up the space: a keyboard, two chairs, some balloons. The walls of Camden People’s Theatre have been scrawled over with a litany of names, introduced much later in the show as the folk who have inspired them along the way. Emmeline Pankhurst is one. Renni Eddo-Lodge another. The feeling is informal, the tone friendly: Rebecca introduces herself as Rebecca, and Beth as Beth. The surtitles begin behind them.

What follows is an hour of fragments. In the future, a woman with the illustrious role ‘Dead Body 4’ in an amateur production of Children of the Sun has an epiphany about the state of the world. Further in the future, a covers band is practicing for their first gig, interrupted by news alerts coming through on a mobile with increasing frequency, and decreasing consequence. Where they initially raise comment from Brewer – a pause for thought in the proceedings – they quickly become impossible to read, flicking past on the back wall too fast for us to process. Justified anger and dismay is neutered by artistic solipsism. These two through-lines interweave with other texts – the show notes list (as well as Gorky) a plethora of artists as influences, including Kim Gordon of the pioneering rock group Sonic Youth, plus original writing from director Hughes. It’s a complex construction, and there are moments when these complexities shine. Brewer despondently reading from Gordon’s autobiographical Girl in Band, underscored by Higham-Edwards counting in 4/4 time, leading the audience through a piece of imagined music, is singularly beautiful and poignant.

It’s a show that is high in intelligence, but unfortunately low on impact, in spite of strong performances and interesting set pieces. So much is woven in, but it is rattled through at such a pace that big ideas feel rushed and under-explored. There are a lot of ideas at play, a lot of texts in the mix; it is so brim-full of thoughts that it’s at times overwhelming, at times baffling. Somewhere amongst it all are those big questions about race and patriarchy from the programme notes, mixed with questions about performing whilst feeling a fraud, and about what we owe (and don’t) to our collaborators. Music as a metaphor runs throughout and yet, though the show is described as an ‘anarchic song cycle’, what we mostly receive are a few karaoke versions of modern pop songs. Much is told, rather than shown. Nothing has time to embed.

Nevertheless, it is a show that challenges what a performance has to be, or be about. In the small space of CPT, two friendly and engaging performers ask you to come with them as they try something out, as they time-hop, as they build big worlds in a black-box theatre on the Hampstead Road. In the midst of everything, the clearest impression that I am left with is of the kindness of the performers, to the audience and to each other. Daughters of the Sun offered no resolutions, nor did it really try to. It’s a concept album: a paean to the perennial challenges of making art meaningful.