Katherina Radeva was born in Bulgaria, and has resided in the UK since 1999. Katherina is a theatre maker, a set and costume designer, and a creative collaborator. She is one half of Total Theatre Award winning duo Two Destination Language whose intercultural dialogues in theatrical forms tour extensively in the UK and internationally. Her work brings striking visuals to audiences across theatre, dance and interdisciplinary work. In addition to making live performance, she paints, draws and writes in response to her lived experience while resisting the label of autobiographical work. Living in a rural place, Katherina is fascinated by the interplay of communities large and small. She really wants a dog, but worries she's away from home too much. www.twodestinationlanguage.com 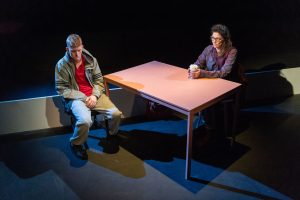 As I walk in, I see a frame within the invisible frame of the theatre. That gives me a clue. The light is dim. The set is angular. A large, flat, lightly-coloured rectangular frame shapes dark steps beyond the frame. A table penetrates the frame – a way into the story, and a way out of it.

The piece, as with much of Hurley’s work, is set squarely in Scotland, in Edinburgh, and it takes us through a variety of places: Salisbury Crags, a cafe in Edinburgh’s New town, Scottish Modern Art Gallery, the Traverse Theatre itself. Projected text signals each new setting, leaving us to imagine the space and the people who may normally inhabit it.

A boy and a woman share the stage. The boy is wearing a grey tracksuit bottoms and a hoodie, black trainers. The woman is in jeans, a shirt, red boots and fake fur coat – the boy’s senior by some twenty years.

We meet Libby, a writer, as she is about to jump from the Crags. Declan, a boy who has been sitting drawing behind her, leaps up to pull her back. What follows is a love story, starting with the gift of the drawing – something he perceives not as art, but as escape, a way to deal with anxiety, a way to be alone, and a way to be at peace with himself against the whirlwind of powerlessness in a dysfunctional family. She takes him for coffee, then to art galleries, and his story finds its way to the centre of an idea for a play – she cuts off the romance to favour her art.

She has instilled a confidence in him, shared her knowledge and enthusiasm, but it’s not a ‘fair’ exchange. She gets not just the nine-grand writing commission but also, for herself, hope of the kind that he is desperately trying to magic for himself.

Interrupting this story are monologues from Libby, the writer, at Traverse, speaking to the audience about this play, Mouthpiece. Which we know, of course, to have been written by Kieran Hurley. The text plays constantly with this relationship of truth and fiction: the here and now we inhabit, and the one just within touching distance; the line crossed on stage by that table. The text itself is very much the centre of Orla O’Loughlin’s production: the layering of questions around class, inequality, exploitation and consent in a story which never really offers much prospect of happiness. There’s a sense in the stark lines of the set, the refusal to create on-stage any detail of the different worlds the text takes us to; of something wrong in the values of theatre itself.

The trigger for Libby’s suicide attempt is the way she perceives her career as a dramatist to have failed: London no longer beckons. The cost of her survival, though, is a play, Mouthpiece, in which her version of Declan ends in his suicide. His struggle to protect his young sister and find a better life than his mother has been able to give him is doomed – and as audience, we can’t be sure whether that’s Hurley’s plot or Libby’s: within this skewed frame, the ‘true’ fiction, and the fiction within that, are inseparable.

In one scene, Libby puts into words what she has seen in Declan’s drawing: she describes a boy’s mouth all scratched up, and for a quick moment Edvard Munch’s The Scream flashes in my mind. The Scream was a very controversial painting for its time, groundbreaking in the brush marks and in what it portrayed – a figure in distress. And to an extent, sat at Traverse Theatre, Mouthpiece feels a bit like that too, in its foul language and in its determinedly realistic portrayal of working class survival. And there’s guilt, too: about appropriating that story, about pretending to give voice to someone as if they lack their own.

The resonance with pertinent ideas about what is under-represented on stages, and what is mis-represented, and who gets to decide, and who watches it, are clear.

When Libby takes Declan to an art gallery, she persuades him that it’s a space he can visit, a space that’s free, because art is for everyone. So he turns up at the Traverse Theatre, believing this, and is made to buy a ticket to see his own story.

It’s an interesting parting shot from Orla O’Loughlin, in her last Traverse production, to ask who theatre is made for, and why. The direction pushes the text to centre, keeping both performances subtle despite Lorn Macdonald’s physical energy as Declan. Neve McIntosh’s Libby is at her most charismatic when addressing us, the audience, directly, and how much she has been playing Declan along throughout – what we choose to believe is ‘true’, the layers of performance – becomes an unsettling question. As does Kieran Hurley’s own relationship to this story, and Orla O’Loughlin’s too, as she leaves Edinburgh’s Traverse and follows the bright lights of  London to join the Guildhall School of Music and Drama.