Two Brighton Festival presentations, Museum of the Moon and Ghost Caribou, are seen in a park at nightfall by Matt Rudkin

By day it’s a mild-mannered, strangely blue giant sphere, but by night it transforms into an internally illuminated, optically bewitching orb. What else to say about this enormous inflatable moon, other than to emphasise how mesmeric is the effect. Come nightfall it seems a weirdly flat, pinpoint-accurate rendition of the lunar surface, suspended above the Queens Park pond and casting a huge reflection in the gently rippling waters.

It fascinates the eyes, and I found myself looking and looking for many minutes without the need to cogitate on any conceptual conceit the title, Museum of the Moon, may suggest. It struck me as really just a beautifully executed and technically accomplished… giant moon.  I suppose there may be many possible avenues of analysis but my mind was disinclined to distract itself from the sheer wonderment of the thing. The only question that did eventually intrude on my reverie was, how on earth did they make it?

In the trees surrounding the pond there were mounted several speakers and I understand a soundtrack composed by Dan Jones normally accompanies the piece. At the time I saw it, however, the speakers were silent, or possibly the sound was not audible from my vantage point.

Museum of the Moon was created by UK artist Luke Jerram. 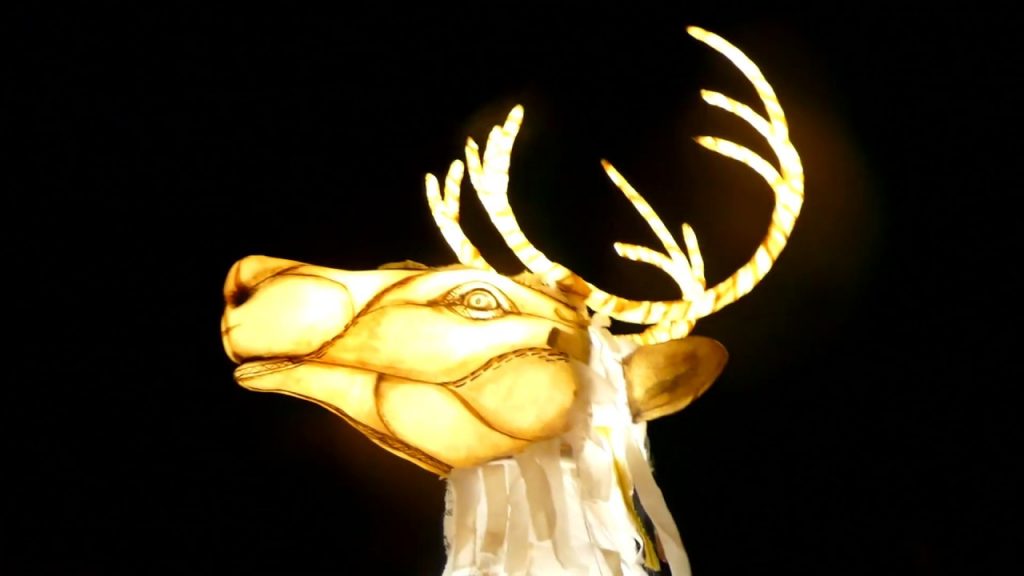 Thingumajig Theatre’s Ghost Caribou, which is one of the Without Walls outdoor arts commissions for 2019, was also seen on this full moon eve in Queen’s Park, Brighton.

The central pieces of this short performance are two beautifully realised, several metres tall representations of North American deer carried on the shoulders of their operators. Illuminated from within, their delicate internal structure is revealed through the skin, and their heads are held on mechanisms that allow for some expressive tilting.

As they whirl about to a pre-recorded, electro-gamelan soundtrack, directed by a shamanic cleric it all has a ceremonial, ritualistic feel. Just as I’m wondering if they are fighting or romancing, and whether some sensitive souls might cry ‘cultural appropriation’, these charming figures lean their heads skywards and let out their mournful cries, which many of the spectators in attendance enthusiastically join in with.

A large white sheet is then stretched between the caribou onto which is projected a shadow puppetry section. This features two smaller representations of the animals who appear to dance amongst a cityscape.  On reflection, I imagine they might have been actually protesting the encroachment of human civilisation into their habitat, but the glow-stick additions to the shamanic costumes suggest this element of rave. It’s also probably quite hard to clearly differentiate the difference between dancing and protesting in the medium of shadow.

And then, after 15 minutes or so, it’s over. As an outdoor festival event, the appreciation of the piece will partly depend on the size of the audience. There were several hundred gathered on the slopes to witness it on this occasion, and I did consider whether the shadow puppets were perhaps too small, and the duration too short, to fully match expectations.  But that’s a question for the festival programmers rather than the company, who certainly created an enchanting night-time spectacle that was met with hearty and heartfelt applause.