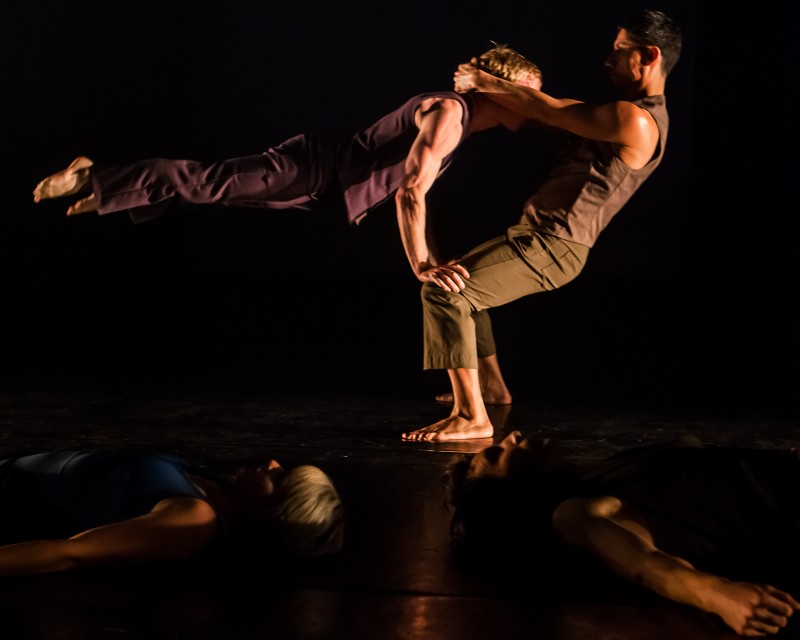 Brisbane-based contemporary circus company, Casus, was formed in 2011 by established solo artists Emma Serjeant, Lachlan MacAulay, Jesse Scott and Natano Fa’anana. Their sensational debut collaboration Knee Deep has been performed widely in Australia and around the world, and this is its second visit to the Brighton Fringe.

In the atmospheric setting of the Spiegeltent the audience sits on three sides of an elevated thrust stage, a bare, well-lit setting that dramatically foregrounds the position and action of each performer. Knee Deep opens with Emma Serjeant skilfully walking on a couple of boxes full of eggs without a single crack. This impressive opening signals what is to come: a striking performance that tests the limits of body strength and poise through acrobatics, aerial work, and acrobalance, with impeccable timing and spatial acuity. The performers skilfully climb up one another, roll over each other, vertically interlink their bodies like rings in a chain, or forcefully push and pull on one another. Besides their bodies as the main apparatus of the show, they use a few acrobatic tools such as trapeze bar, strands of silk, ropes, and hula-hoops, that allow them to hang upside down, briefly plunge or interlace with each other. As the bodies move breathtakingly on the stage, the audience feels a throbbing in their hearts, sometimes jumping in their seats moved by both the palpable risk and warmth emanating from the stage.

This visual feast is formed of a series of vignettes each marked by idiosyncratic music ranging from jazz and acoustic to electronic and chamber music by Kronos Quartet, Sentieri Selvaggi, Gil Scott-Heron among others. The carefully structured sound design enhances the intensity of the visual acts on the stage, deepening the impact of every physical action, be it a quick and powerful aerial move, funny trick or gentle hand balancing. Black Angels by Kronos Quartet creates tension as Serjeant is walking on the eggs, Metrorail Thru Space by Cut Chemist forms a playful mood during the performers’ acrobatic moves.

The group has a noteworthy harmony and equality in the ways the performance is divided up, as well as in terms of their physical capacities. The performers move fluidly on and off stage, into and out of the spotlight, supporting one another in different configurations, but all four are given equal prominence. The only female performer, Emma Serjeant, is striking when she smoothly carries and supports two of the male performers on her back. Beyond their accord as an ensemble, each member of the troupe also shows his/her individual skills through solos: Natano Fa’anana climbs up, folds and unfolds himself through the strands of silk, amplifying this image by simultaneously creating an origami bird whose flightless wings stand in stark contrast to his own stunning aerial display; Jesse Scott skilfully stands on his head to duet engagingly with a single egg; Lachlan MacAulay does acrobatic turns on the rope as if he was dancing with it; and Serjeant pushes the limits of balance and flexibility whilst hand balancing on Russian-style rods. Beyond their remarkable skills, vigour and potency, what is momentously arresting in their performance is the fact that they do not attempt to present the audience with perfection. Throughout the performance the audience clearly sees the struggle and resistance of the performers’ bodies as their muscles contract, arms shake and they sweat. As much as the strength of the body, its fragility and boundaries are revealed, making the stunning acts on the stage more down to earth without reducing their jaw-dropping impact on the audience.

Eggs are a recurring motif throughout the show: being hammered into (without cracking), balanced upon, dropped from a height, even serenaded through acrobatics. This central image’s delicate yet hard shell hints towards the fragility as well as the strength of human body and existence. This analogy between the fragility of eggs and delicacy of human beings becomes more momentous when eggs accidentally get broken in some sequences.  However, the imagery of eggs remains ambiguous in the show: its uses are not intelligibly interlinked and contextualised within the performance, its potential not fully realised as an idea, though certainly creating electrifying wow-effects.

The show’s other recurrent theme is defined by the company as a journey through ‘fleeting relationships’. During the show there are instances of pushing and pulling of bodies, of connection through human chains and towers that evoke the ephemerality of human relationships as well as the sense of need and desire for bonding. The performances have visibly emotional notes: actions are laughing and warm, or tentative, or provocative.  We are encouraged to see the human figures behind the performing bodies.

Knee Deep is striking visual poetry, a technically robust and tight production, which mesmerises its audience mainly with the strength and dexterity of its performers.  Yet its treatment of the themes the company obviously intends to weave in remain momentary and tenuous as an aerial flip and don’t leave any lasting impression. What does remain is the sense of a beautifully choreographed, captivating circus performance offering an insight into the changing face of modern circus by placing its performers as fragile human characters squarely in the spotlight.

Seda Ilter is a drama and theatre scholar currently working as an Associate Lecturer on the Text and Performance and Shakespeare and Contemporary Performance MAs at Birkbeck College, University of London. She holds a PhD in contemporary drama, and her research interests lie in the theory and practice of modern and contemporary theatre, aesthetics and politics of new media in theatre, new British writing, and writing practices for performance. Seda is also a freelance translator of British plays into Turkish, and a theatre director. Her most recent project involves the translation and staging of Tim Crouch’s The Author in Istanbul.