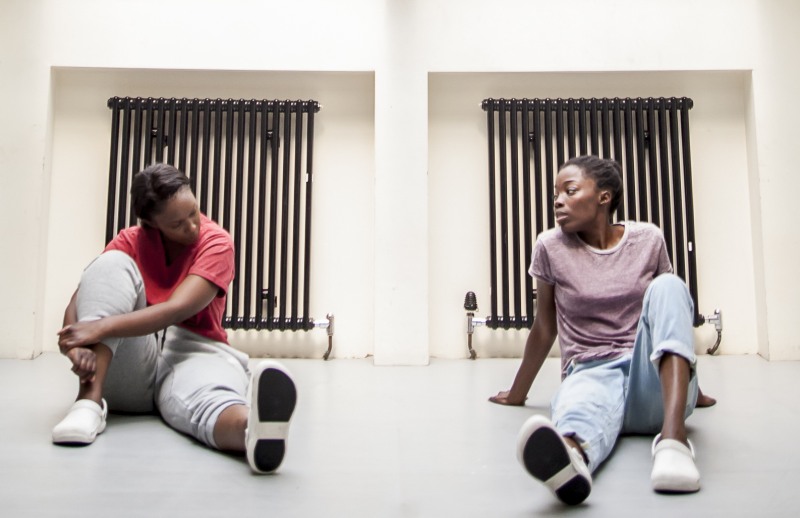 Clean Break’s Little on the Inside initially makes you feel uncomfortably framed. You take on the role of judge, jury, prison officer, social worker and even patron of Clean Break as you gaze down on the two very engaging performers – Estella Daniels and Sandra Reid – preset in a state of frustrated non-communication. One is still and silently weeping, the other swaggers and gasps with frustration. We are in the Anatomy Lecture Theatre at Summerhall and it feels like an experiment. This sense of gazing and witnessing through the lens of cell window and public gallery is an interesting hook which morphs through imaginative storytelling and incisive writing into the green space of the imagination.

You are drawn into the interweaving story of two prisoners’ short and unrequited love affair, but it’s much more than that. It is a quite harrowing retelling of how they came here, and it’s full of bravado and the need to tell it how it was, truthfully, or even better than how it was. The delivery feels like playground gossip or overblown exaggeration connecting to the clever twists and turns of the court-speak that ties the defendant in knots, especially if it was a sexual assault that caused the accused to murder, which is what I think happened. I say I think because, curiously, you can’t quite work it out. The characters are named A and B. I don’t know if it’s A or B who is silent and crying at the beginning, but by the end they have swapped.

Both performances are strong, sharp and totally absorbing. In particular the playing out of institutional roles in their sentencing stories is tangible and often funny. But the overall feeling one is left with is a bleakness that ends at the prison gate and the cell door, and unfortunately doesn’t extend into the imagination, into which it feels like the piece might have gone further once a clever motif was set up, with petals and sea dreams of monsters and babies. I wanted more, but perhaps that is because I wanted a story of survival, and that does not sit easily in this kind of work, where moving on is a whole life story and not a 40-minute play.