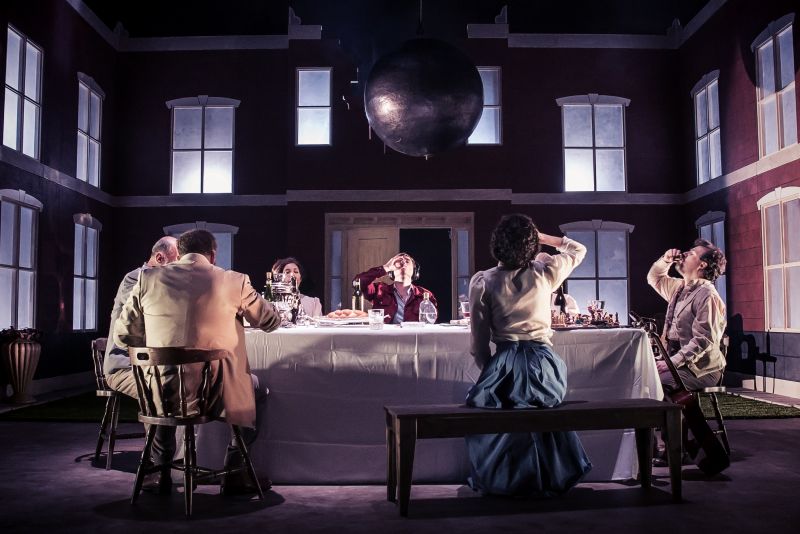 A bourgeois rollercoaster of classical criticism, existentialist musing, and liberal destruction of the past, speckled with interjections of the true life of acting, money, and debt – what good is a Chekhov play nowadays? In Ireland, to be more specific? Who are these nobodies moaning about their mansions?

Chekhov was a key exponent of naturalist theatre, dedicated to capturing real life and placing it on the stage. This is a staging of his first play, which it seems has had so many drafts all the good characters have been cut and all the important backstories or subplots have been slashed, leaving us with a shell-like play of some people outside a big house. This at least is what we are told by the director, who speaks to us through headphones throughout the play.

Before the Old Vic’s beautiful red curtains are drawn, the director tests our headphones are working. He explains he was worried that we would miss all the references and themes, so will be providing a director’s commentary. This is met by chuckles from the theatre: the idea that the classics are drenched with signifiers you could easily miss, that expert commentary is positively necessary for us to fully grasp these over-studied pieces of culture, is a familiar one.

When they open at last, the curtains reveal an absolutely stunning image of a grand house, banquet table and the back of a stately woman looking at her own property. Property, the director tells us, is a major theme in Chekhov’s work.

The commentary is funny.  The director becomes frustrated when the actors pronounce names wrong, miss out whole pages, overplay or underplay. He starts to literally speak over them, their speeches muted and his voice taking over, talking and talking about why this play is important and what it means. It’s interestingly annoying.  It makes me aware of how much the classics are talked about and how their worth is validated by this talk, but what about the actual play? How does it make anybody feel? How does it make the actors feel?

Meanwhile, the play’s narrative is building up to the arrival of the lead character, Platonov.  The characters are all obsessed with Platonov – it’s clear that he is a real somebody.

And then, everything shifts, and the shift is really welcomed. I can’t even recall the order of the following events, such is the explosive whirlwind of images that break the play wide open, slicing it through, bending and burning. The performers start to shed their characters, they fall into performances of who they really are: making adverts, crippled by debt, abandoned by age, sick and dying.  They are nobodies, they feel like nobodies and they want to be taken away. This is communicated through a series of theatrical images, which appear chaotically and hauntingly. A pregnant woman lies on a table, blue liquid seeping from her belly, while the sound of the ocean plays into our ears.

I am dizzied by the experience. There is a violence to it. A gun is shown in the first act, and so it must be shot in the second. Likewise, the foreboding was there, that this was all going to shatter to pieces, from the beginning.  To be honest, once it started, I wanted more. I wanted a total obliteration of that beautiful mansion house.

I am left considering what it feels like for a poor actor to put on that costume and pretend to be wealthy, a property owner, moaning and crying and eventually dying. I am left thinking about plays that have nothing of the living in them. The living that is messy, unknown, unknowing, and doesn’t own anything.

A theatre piece about theatre, Chekhov’s First Play goes a little too far in one way and not far enough in another. By this I mean, it is too committed to metanarratives and not totally committed to what can really happen when real life walks into a naturalist play. However, slick, surprising, and visually epic, Chekhov’s First Play serves Mayfest’s ambitious and important goal of bringing the large scale to contemporary theatre, presenting Bristol with a memorable show that is really letting rip with big props, big sets, and key issues.