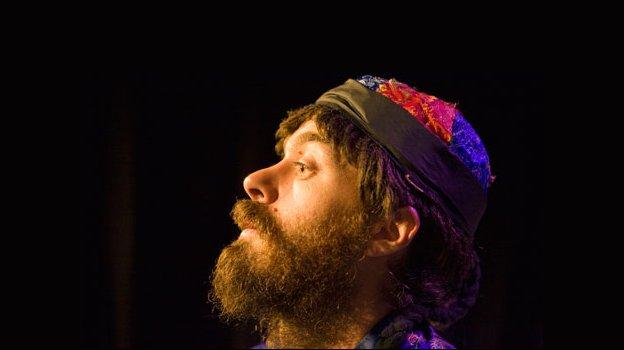 http://sclarita.com/\"/zovirax\ An empty stage, house lights on full, three false starts, then a blast from Carmina Burana (aka the Old Spice ad music), and a great moving lump appears in the back-wall curtain, which is pulled this way and that, chairs and shoes and toilet rolls spilling out of the sides. The curtain is pulled down with a terrible clatter, and ‘Doctor Brown’ is thrown into the space. He’s dressed in an embroidered Chinese dressing gown, and is wearing one battered slipper. He has wild hair and a beard, and terribly compelling brown eyes that are almost snake-like, hooded. He stares at us with something that might be a smirk on his face, possibly a simper, his body not exactly contorted, but somehow misaligned, off-kilter. He adjusts his dressing gown slightly, tugging the front edges together. He looks as if he is about to start speaking, then changes his mind. He does this again. And again. And again. And again. The snake eyes wander round the room. By now almost everyone in the audience is laughing raucously. His eyes keep fixing onto one woman (seated next to me) who has an extraordinary, high-pitched laugh. This attention makes her laugh more, and makes everyone else laugh more. Ten minutes pass and nothing more has happened, but the atmosphere in the room is close to hysteria.

list of 100 free dating sites for singles from wikipedia Doctor Brown Becaves is a comedy show, but it is physical comedy, delivered by a talented performer who trained with the legendary Philippe Gaulier, French master of dark and demented clowning. The classic Gaulier exercises, based on relentless repetition – repeat, repeat, and repeat until the audience gives in and laughs – are evident in his technique. What’s odd about it all is that the audience seem almost ahead of him; it’s a very knowing audience, and it feels as if most people in the room have seen his work before. So there’s no resistance to push against; everyone is putty in his hands.

https://dontemplestorage.com/3684-dte50135-how-online-dating-makes-loneliness-hurt-more.html With an audience already permanently convulsed in laughter, is there anywhere else to go? He moves off into a series of surreal physical/visual sketches. The odd-bod Chinese sub-theme running through the show is developed from a chopsticks gag, in which (inevitably) the inanimate objects fight back, to a mock Peking Opera skit, replete with plastic masks and torn paper parasol. An audience member is brought up to play the beloved. It’s amusing, but it feels like it could go further than it does.

Then there’s a costume change: from Oriental dressing gown to a blonde wig, frilly pink undies and a workwear green cotton apron, via a bending-over back view of bollocks dangling down, and apron strings pulled up between the cheeks. This gets one of the biggest laughs of the evening, but there again jiggling man-bits always do, it’s inevitable.

He then moves into the audience and stands next to the laughing girl, a notebook in hand. He stays there a long time. She laughs, and laughs some more, and so does everyone else. She thinks he wants her phone number; someone behind her twigs and offers an order for coffee to the ‘waitress’. Again, there could be more.

‘What do you want from me?’ He cries, just before the show ends. From this audience’s perspective, the answer seems to be ‘nothing more!’ An extraordinarily gifted performer, but I’d personally like to see him work outside the safety of the late-night comedy circuit. Apparently he also has a children’s show. Now, that might be very interesting!