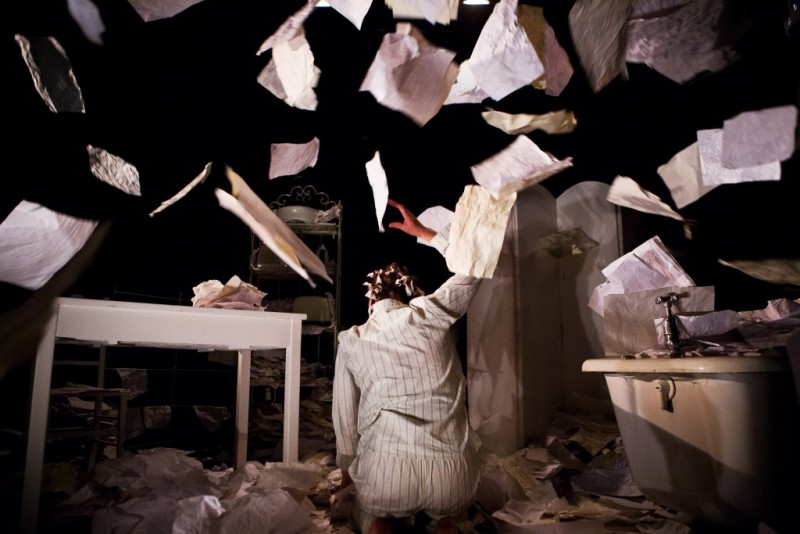 Torn invites the viewer into a private place. A place where madness is close, but will never be called such because this kind of madness is, perhaps, common to us all, and remains contained in moments of loneliness. There is no witness to call us mad.

Though here, in Francisca Morton’s intimate exposé of one woman’s journey through loss and isolation, we find that there is a witness in the form of the plain view presence of foley artist Barney Strachan whose work simultaneously amplifies the sound of a figure simply being alone in those nocturnal moments of loneliness and sensitivity, and disassociates the body from its effect on the immediate environment – both familiar components of psychological pressure and depression, and a singularly elegant production device.

The woman at the centre of the piece lives deep within the memories of a relationship now ended. For the most part, these memories, visualised as neatishly arranged and classified piles of paper, are held close as a comfort. They attend her when she is watching movies alone late at night, they envelop her like a warm bath as she bathes shamelessly in the recollection of passed times, she neatly visits the memories one at a time, pressing them flat, airing them on lines to keep them fresh and clear.

Unfortunately, inevitably, loss itself asserts itself and the weight of memory becomes overwhelming. Order slips, repressed feelings come steaming and bubbling to the surface, and she becomes lost once more, helpless and needy as a baby bird in a nest of torn and twisted scraps, calling with agonising tenderness to be lifted from this lonely place.

Given the subject matter, it is a testament to Morton’s control – and that of her two directors, Shona Reppe and Ian Cameron – over the work, that Torn plays out as much more playful and self deprecating than one might anticipate. One could almost come away with the feeling that this piece with all its pain and all its articulation of unusual behaviours is, in itself, a memory, viewed from the safe distance of time – in which we can hopefully suppose that the character has found repose.