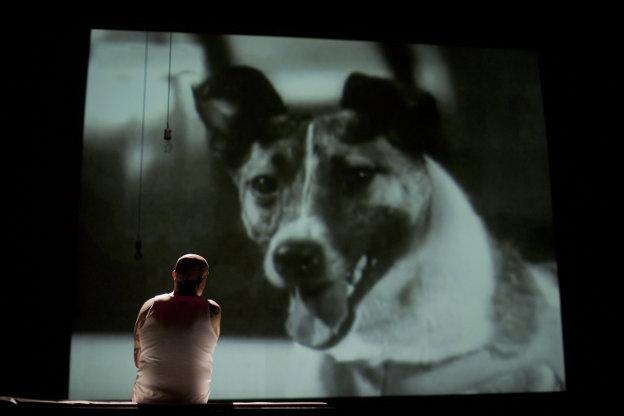 At first Franko B’s new work Because of Love – Volume 1 appears as resolutely non-theatrical as his previous offerings. Incorporating an uncompromisingly opaque mise-en-scene and sections of unblinking repetition that lead nowhere, it very politely puts both fingers up at the proscenium arch that surrounds it. Yet it also weaves a story through our subconscious through a highly crafted use of emotive projections, a rousing piano score, an animatronic dancing polar bear, a glitter ball, and the most effective use of Canidae heads since the bombastically theatrical Three Kingdoms.

During the first section even some ‘fans’ in the audience appear flummoxed by this new turn of direction from their hero and seem to lose interest. But, for all its unwillingness to explain itself, this is not a frustration I share, Franko B’s dignity as a performer holding my attention from the outset. He begins, against a slideshow of historical snapshots, by running through silent mantras and movements. Each pause and look at the audience, each jog or skip clearly mean something to him but there are no easy answers for us in these strangely mundane actions. But there is something hypnotic in the purpose he infuses into each position, and once again the body, in all its sweaty and panting glory, is at the centre of this holistic experience. Slowly it becomes more theatrical and the pared-down aesthetic and discordant soundscape explodes into visual and melodic splendour – with a witty song, a duet with a bear, and moments that would put Robert Wilson to shame.

Although captivating at first we are bemused by this overload of semiotics and the piece feels fractured and obtuse. But post show the experience has grown in my mind and the friction felt between the theatrical and non-theatrical elements has fused into a new appreciation for this piece. In my memory the silences that were flat have become charged and links have been made between the minimalism of the beginning and the florid nature of the end. Questions around the sentimentality of memory have been unavoidably confronted as my own memory performs such an act. This is a central concept to Because of Love – Volume 1 and as such makes me feel a part of Franko B’s explorations.

Inspired by experiences that have affected its performer, the piece nods to many artists opaquely – Rothko, Ron Athey, Dazuo Ohno, Raimund Hoghe, Anselm Kiefer. Some moments feel acutely personal to Franko B, while others appear more presentations of residual emotions left in him from these encounters. As such the composition of this theatrical collage is made up of a mixture of ‘organic’ and ‘man made’ emotion, meaning Because of Love – Volume 1 is both a revealing love song to, and a curated exhibition of, memory.

Throughout, Franko B dances between the objective and subjective delicately, creating a swirl of dissociative iconography that swims around your head before settling into melodic harmony. Do we romanticise our memories of cultural events? Because of Love – Volume 1 leads me to believe that we do and has encouraged me to interrogate if we should.