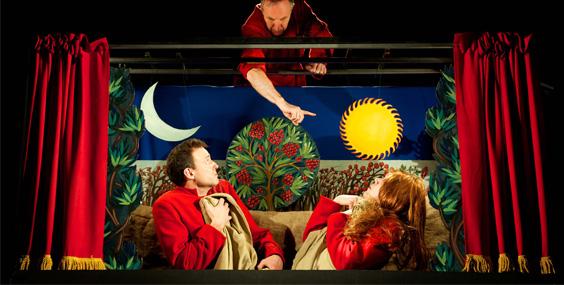 For full listings go to: www.mimelondon.com

Meanwhile, here’s a summary to tempt you…

LIMF 2013 opens 10 January at the beautiful new Platform Theatre in King’s Cross with the latest show from Britain’s most innovative aerial theatre group, Ockham’s Razor. Not Until We Are Lost is an immersive promenade performance which brings the audience right into the heart of the action.

Soho Theatre sees a puppetry double: Blind Summit’s new show The Heads (World Premiere) runs 17 to 26 Jan 7.30pm, with an after-show discussion led by Total Theatre’s editor Dorothy Max Prior on 21 January. The Heads promises ‘a cascade of imagery inspired by Cubism, McCarthyism and Catholicism, with guest appearances by a puppet Madonna, a cardboard J. Edgar Hoover, some giant hands and much more.’ See you there! Running in tandem with Blind Summit are Invisible Thread (led by Liz Walker, one half of the legendary Faulty Optic) with Les Hommes Vides, a twenty-minute, low-tech, charming, eerie and comic performance of slapstick and surreal table-top puppetry and object theatre. It contains scenes of plank action, eyeless shopping, bouncing puppets, poetry and prizes.

Jacksons Lane will be hosting Simone Riccio (Italy) with Nothing Moves If I Don’t Push It, Friday 18 – Sunday 20 January.
London-based Italian circus-theatre artist Riccio (seen recently as part of the Albany’s mini circus fest) promises an enticing mix of high octane acrobatics, using German wheel and Chinese pole amongst other circus skills. The show was developed in collaboration with Spymonkey’s Aitor Basauri

The Southbank Centre has been a longstanding partner of LIMF, and this year they will be presenting My!Laika (France) with Popcorn Machine (12 – 15 January). We are promised an apocalyptic, electric landscape where a surprising present coexists with an unknown past; and where humour, bold acrobatics, a well-played Chopin waltz and a popcorn volcano are all elements in the eclectic mix. German company Circle of Eleven’s Leo was a great hit at the Edinburgh Fringe 2011 and 2012, and now (16 – 22 January) makes its London premiere at the Southbank. Leo combines world-class acrobatics, visual artistry and clever film manipulation in a journey of joyful discovery and invention. Also at Southbank (18 – 20) are LIMF favourites Compagnie 111 (France), back with one of their best-loved shows, Plan B – a thrilling mix of circus, dance, video, ‘sonic’ object manipulation and optical illusion, performed on a cunning, tilting set that plays with gravity and perspective. And then (24 – 27) there’s the return of another LIMF favourite, the gentle and whimsical clown Wolfe Bowart (Australia), creator of the lovely solo show LaLaLuna, now presenting Letter’s End (UK Premiere) in which mops sneeze, storks swoop in bearing gifts, trees grow out of shoes and long-lost letters tell their stories.

Linbury Studio Theatre, Royal Opera House will be hosting the legendary Derevo (Russia) with Harlekin (16 – 19 January). A kind of dark take on the commedia dell’arte story of Harlequin and Columbine, Harlekin is a show that many see as a very special and personal piece by Derevo founder-director Anton Adassinsky. Les ballets C de la B are not regularly seen at LIMF, but are here at the Linbury with The Old King (21 – 23 January). Produced under the guidance of C de la B founder and artistic director, Alain Plâtel, this epic new movement-theatre work was a hit at the 2012 Festival d’Avignon. Also at the Linbury, the welcome return of 2012 LIMF hit Smashed by Gandini Juggling, a sensational mix of j skill and theatricality inspired by the work of seminal German dance-theatre maker, Pina Bausch. Catch em if you can! (24 – 26 January)

Over at the Roundhouse, Birmingham’s own Stan’s Cafe introduce us to The Cardinals, an evangelical puppet show in which the puppets have gone missing… The Cardinals ask us to show faith, whilst theatre traditionally asks us to suspend our disbelief; a fascinating premise for a thought-provoking, witty and hugely entertaining show. Once again, there is a post-show discussion facilitated by TT’s Dorothy Max Prior (on Tuesday 15 January).