Karen Finley! Karen Finley smeared in chocolate. Karen Finley performing unspeakable practices and unnatural acts live on stage. Karen Finley getting banned – from art galleries, from rock venues, from public toilets. From public toilets – oh yes! I’ve never seen her live, but have admired her from afar for years. Well, I would wouldn’t I? She’s my generation – a child of the 1950s who came of age in the 1970s, embracing punk, porn and performance art with gusto, one of a number of women artists (see also Annie Sprinkle and Penny Arcade and Cosey Fanny Tutti) re-evaluating sex and flying the flag for freedom and liberation and…

And then came AIDS. It started as a rumour, towards the end of the 1970s. There were people on the scene getting sick, getting colds that went to flu and then to pneumonia, knocked over like skittles, blown about like feathers from a discarded boa. Maybe it was something to do with taking poppers or, er… who knew what. The rumours were whispered in the toilets at Danceteria (New York) and Heaven (London) as a new decade came in.

As the 1980s unfolded, we found out what it was – although there was so much fear and prejudice and mistrust it was often hard to get to the facts. People died, lots of people died. People were scared, very scared. Children who had HIV-positive relatives were asked to leave their schools. When Lady Di pointedly took off her gloves on a hospital visit and held the hand of a man with AIDS, it made the front page of the papers – a game-changing moment.

Karen Finley’s installation Ribbon Gate (sited at the Barbican, which is also the venue for her SPILL Festival show, Written in Sand) honours the many deaths from AIDS over the past 30 years, using the idea, popular in South American Catholic churches, of tying a ribbon to a metal gate in commemoration. We are invited to honour the life and mark the death from AIDS of someone we’ve known and loved. I choose Derek Jarman. As I tie my (yellow) ribbon on to the gate, incongruously placed in the middle of a busy and overlit walkway, mayhem erupts all around me. It’s a protest, demanding a living wage for the Barbican cleaners. There is chanting and shouting and banners waived. Ribbon Gate sits stoically in the middle of it all. Derek would have been amused, I think.

I look for an usher to find out what space the show is in. I start to ask the way. Are you going to see Hamlet, the usher asks enthusiastically. No. I find my own way to the Pit.

In Written in Sand, Karen Finley keeps it live, responding to the moment, reflecting on how she’s feeling, asking how we’re doing. She references both the Benedict Cumberbatch Hamlet happening above us, and the pro-cleaners fair wages protest. In fact, she gets us to applaud the cleaners, and the technicians, and the SPILL Festival producers, and the ushers and….

The atmosphere is relaxed. Less Dead Kennedys than late-night jazz lounge. There’s even a man playing a flute, for goodness sake. So yes, it’s a gig, kind of. A spoken word with music event. Music that is mostly mellow and laid-back. That flute, and piano, and bells, and synthy strings coaxed from a laptop, and gentle percussive backbeats, all conjured up by talented multi-instrumentalist Paul Nebenzahl. We get a mash-up of writings from Finley that include legendary texts like Hello Mother:

The music might be mostly mellow, but the vocal delivery is intense and vibrant and shrill and angry, and the words are sharp, thrown like knives out into the auditorium. Time hasn’t healed. Finley tosses her hair and spits her frustration, a fiery ball of passion. Many of the songs/poems/texts (call them what you will) display the frustration and impotence of those left behind. It’s time to honour the dead, to name them. John. Howie. David. Thomas. Her grief is palpable, decades on, as she tells us of phone calls almost-made to dead friends in the middle of the night; of exasperation at the ‘positive attitude’ of a dear friend who is dying; of the sorrow of the woman nursing her dying daughter: ‘No granddaughters for me…’ sighs the mother. This song reminds us that AIDS, like Ebola, like other devastating plagues, is not confined to one demographic. It kills whoever it finds, wherever it finds them. That we lived for decades without prevention or cure, seeing our friends falling and dying in droves, is extraordinary. It was brutal.

In between songs, she sits in an armchair, sideways on to us, the audience, facing Paul Nebenzahl’s piano. She muses on all sorts of things. Freddy Mercury’s tackle. Judy Garland at the London Palladium. Rainbow candles weighing down her luggage. The Crying Game. Boy George. Her Rolodex and all the names and addresses it once contained. Do we remember the Rolodex, she asks. She explains what it is for younger audience members – a kind of Ferris Wheel with little cards attached, is how she puts it. It’s clever, this Rolodex moment, because it shows us what different times the 1980s were. A time when people hid their razors and toothbrushes when you came to visit in case they got – contaminated. A time when hospital workers wouldn’t touch patients with HIV/AIDS without wearing rubber gloves. A time when it was only just about legal to be gay, as long as you didn’t actively promote a gay lifestyle (whatever that might be). But if you were in a long-term relationship and your partner got ill, you had no rights, you wouldn’t be let onto the hospital ward, and when the time came, they’d get sent home not into your arms but to their family of origin to die. To a family that had perhaps previously rejected them, abandoned them. She takes the mic for another classic, He’s Going Home:

‘He’s going home to drapes and homemade wine. To a room of cowboys and / fire engines and twin beds. No one to share your bed ever again.’

Sometimes she sits and listens to Paul Nebenzahl play. All the music used is composed by, or was originally performed by,  people who have died of AIDS. He plays a slowed-sown version of the B52’s Rock Lobster, describing it as ‘like an Elizabethan ballad’. Occasionally she starts a song, and gives up, sitting down. ‘I can’t do it right now’ she says. She needs to breathe a bit, to drink some water, to start again. Always the liveness of the moment is acknowledged, and she wants to stay true to how she is feeling and being at this time, in this place. On numerous occasions, she asks for the house lights to be raised, so she can look at us, and talk to people directly. At one point, she invites some of us up to ‘twinkle’ with her, to join her in dancing round the chair and the lines of sand, and the candles.

Whilst ranting against the injustice of these too-early deaths from AIDS in the 1980s and 1990s, she also acknowledges what we all know. That we will all be dead one day. Do I die at the end of the movie, she asks. Yes, yes you do. I do. We all do. It’s October 31st – All Hallow’s Eve. It’s a timely reminder of our mortality. We go out into the night.

So what do you think, someone asks out in the lobby. Think? I can’t think. I can just feel. I feel jettisoned back in time, to a time that was harsh and unforgiving and full of angst, yet life-affirming too, full of music and film (Derek!), and performance. We survived. We lived to tell the tale. We rode out Reagan and Thatcher, ridiculed them with street theatre and industrial music and queer cabaret and…

I force myself to think, to be the critic I’m here to be. I’m not that fussed about some of the music, especially disliking synthesised cello. Some of the spaces between songs/poems are a bit long and unfocused. But actually – who cares. Who gives a…

This evening is not about thinking. This evening is about passion, and commemoration. About words that cut through ideas to reach feelings. About remembering, and honouring. About telling stories to those who were there, and to those who weren’t. About never forgetting their names. About lighting the candle, and holding the space. About tying the yellow ribbon around the old oak tree. Or around the metal gate. Lest we forget. Amen.

Ribbon Gate and Written in Sand were presented at the Barbican as part of SPILL Festival 2015. See www.spillfestival.com 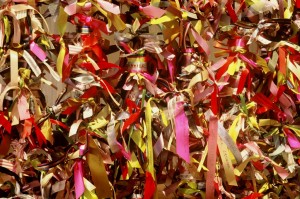