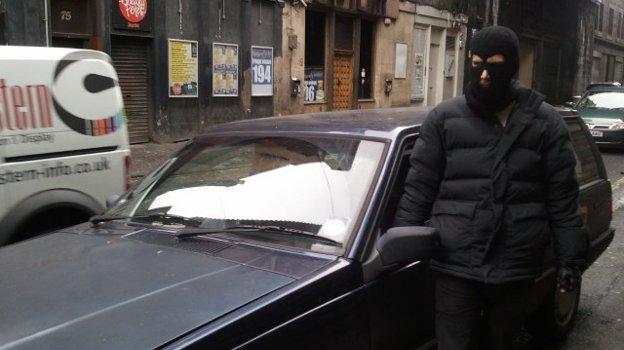 http://janrebel.eu/nextgen-image/120/91x68/crop/ce250c719317a0807670302f3f4a3ad2 Ever had the sort of day where you just set off down the street with no agenda, and find yourself talking to all sorts of strange (in all senses of that word) people, and losing yourself in all sorts of odd, interesting, and sometimes hair-raising situations? Look Left Look Right use this rather lovely starting point to create You Once Said Yes, a one-on-one theatre show set in the streets, cathedrals, bingo halls, graveyards, and bars of Edinburgh.

additional info Audience/participants set off at ten-minute intervals, so are always alone – at least, alone until met by a succession of characters, some of whom are seemingly under the mistaken impression that they know you – ‘Hey, Max!’ they call across the street, beckoning you over and embroiling you in some complicated story that you are apparently part of – whilst in other cases, you are treated as a chance encounter; someone who has just happened upon them, or crossed their path.

nj backpage women seeking men It is the latter premise that works far better. The hits for me are Coco, the lady clown who needs help carrying her balloons across the Royal Mile; Ben, the completely believable stockbroker-turned-gardener who offers you tea from a flask as you stroll amongst the graves; Tom, the homeless man, who plays the jerkily nervous beggar with a terrible past with such wonderful authenticity that you leave him blinking back the tears; and Emily, a café worker who just starts chatting to you casually when you enter St Giles Cathedral. Less successful are the more ‘theatrical’ moments: a car heist story; an appearance at a law court; an invitation to buy into a deal to convert a scuzzy bingo hall into a lush strip club, although I did love the opportunity to go into the bingo hall on a rainy Friday afternoon, and to encounter a posse of real-life characters so extraordinary that you almost suspected they were company plants (floozy lady bingo players in pink nylon; hard-faced grans on the one-armed bandits; a wheezing man in stained trousers defiantly smoking in the hall). In these latter cases, it is not so much the slightly hammy larger-than-life performances (I can live with that!) but the fact that it just doesn’t ring true, no matter how readily you suspend disbelief, that you could possibly be the person they think you are.

But this gripe aside, it really is a very lovely piece: the Edinburgh sites chosen are a varied and interesting mix; the research has been done thoroughly, and this research translated cleverly to performative situations; the route has been planned meticulously, so that ‘accidents’ are unlikely. Unlike other works of this kind, the audience is really looked out for throughout the journey, the transfers from one performer’s zone to another’s really carefully handled, and the ‘what if’ moments catered for (we are issued with a fluorescent orange rucksack that contains, amongst other things, a mobile phone and an envelope that states ‘only open in an emergency’, so we know that we have help at the end of a phone should we need it). I also like the idea that each person’s experience will be, of course, completely subjective, and will be enjoyed in very different ways – I mean, wearing a red nose and helping a clown make balloon animals felt quite normal to me, as did flirting with a young lady with butterfly eyelashes over a glass of wine – and being dressed head-to-toe in charity shop garb is hardly an unusual occurrence in my book! But I don’t usually get into cars with strange young men…

Look Left Look Right describe themselves as a ‘documentary theatre company’ who create work that starts with recording conversations with people about significant incidences in their lives. Previous Edinburgh success Caravan(2007) took the English floods of 2005-2006 as its subject, and Counted?explored the 2010 elections. You Once Said Yes is a great new addition to the company’s repertoire, and of course will be different wherever it is played, so a constantly renewing work. And despite my longstanding relationship with Edinburgh, which I’ve been visiting for over decade, I was taken to little corners of the city that I hadn’t visited before, so feel thankful for that experience.