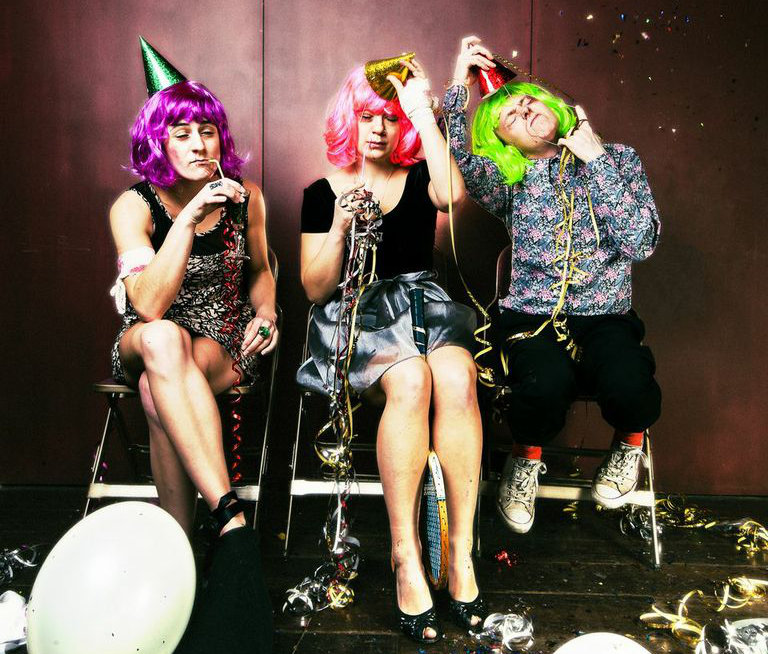 The first night of this bizarre and darkly funny show sees a full house of mostly young people who laugh readily and seem very engaged. The simple and effective visual aesthetic, created by Clementine Keith-Roach, is comprised of neon-lit performer’s names as a backdrop, and pristine white gym outfits with colourful wigs. Yet already we see that all is not as bright and jolly as it seems – for each performer also has a trail of blood issuing from their nostrils.

Made in China, formed in 2009 by Tim Cowbury and Jessica Latowicki, seek to produce playful and provocative work, and Gym Party certainly has a clear sense of identity and an almost childlike sense of playing with form that is exciting to witness. The skilled performers – Latowicki, Christopher Brett Bailey and Jenna Watt – produce some well-rounded and absorbing work, asking more questions than they answer and inciting various and interesting audience responses. It was the questioning of the audience’s role throughout the piece that I found the most exciting, as we forcibly became voyeurs, spectators, and, for some, direct participants in Gym Party’s twisted games.

The performers state their objectives clearly from the start: bouncing dexterously across the stage they tell us they will be taking part in a contest, with each fiercely competitive character determined to win and to be the best. They are here for us, as we are here for them, they say. But then, they also tell us that they tend to lie, and as the contest progresses, the bubbly facade gives way to an altogether darker underbelly, making some important comments on human nature and the many facets of competitiveness.

Initial games such as puzzle room and performers catching as many skittles as possible (thrown from the audience) were humorous and well set up, and here we are comfortable spectators happily watching the action progress. However, as the competition heats up, uncomfortable ‘punishments’ are doled out to the losing performers, with personalities, physical defects and hidden weaknesses exposed and criticised, and our own function changes altogether. Finally, at the production’s culmination, the audience are asked to vote on all manner of difficult personal questions specific to each performer, resulting in a palpable sense of tension that makes for interesting viewing.

This is vibrant work, and the few small first night glitches (principally sound problems) did not detract from the intrigue of the piece. A few tweaks could be made in places – naming the winner of each contest seemed an overly lengthy process and the ‘awkward’ dance sequences were maybe not quite clearly awkward enough to really communicate meaning – yet the questions that this production asks and the heartfelt ensemble performances make for an unusual experience that, for all its discomfort, is strangely enjoyable!