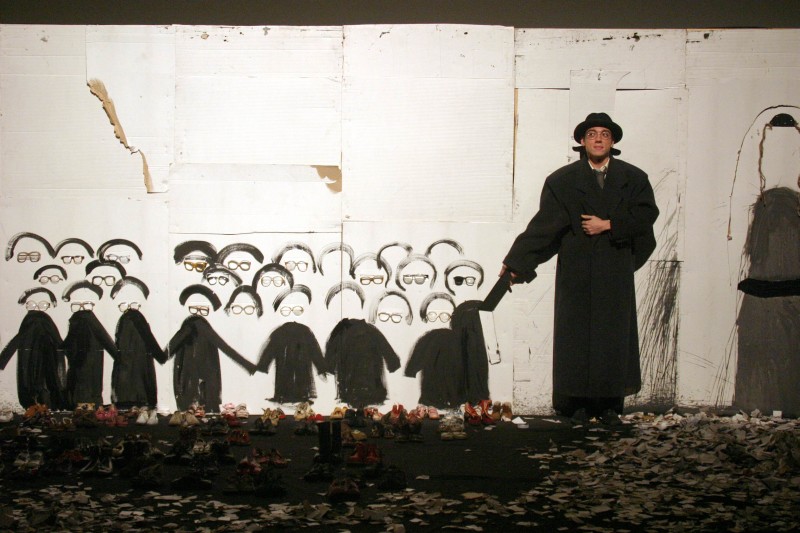 Visual theatre, you say? Here it is in shed-loads: the awesome Opus 7 – created by Russian designer-director Dmitry Krymov and a team of performer-devisers and co-designers – is truly epic, and takes up every inch of the Brighton Corn Exchange with cardboard, paint, a football game, a giant puppet (she’d be ceiling height in most venues, but has a bit of clearance, just about, here), besuited men hanging from chandeliers, waltzing cut-outs, and a herd of beaten metal pianos racing through the space to the sound of Shostakovich’s Leningrad symphony.

Two days on and the images are racing through my mind like greyhounds on speed – I shut my eyes and there are those pianos playing bumper cars, there are the beguiling eyelash-fluttering eyes of that enormous Mother Russia tucking a small figure under her skirt, there are the row of clerics and madonnas throwing tubs of black paint in unison, there is the woman’s leg splintering the plywood door, there is the on-screen image of a Stalinist (or is it Nazi?) guard looking with evil intent into a pram, a real 3D pram hurtling into the space a split-second afterwards.

And sounds, sounds are important too. There are Russian words, and there are surtitles, which I ignore mostly – I catch references to Abraham and Isaac; to a destroyed school; to lost children; to religious and political oligarchies; to award ceremonies; to wars. The sound of the words is what I like – poetic texts, incantations, liturgies. And there is song: church madrigals and bracing folk songs from the ensemble, tiny little voices singing hymns, deep bass drones, or a solo contralto voice rising out from a surprisingly slight young woman. There is the ringing of tiny bells, and there is the boom and crash of Shostakovich’s bombastic orchestrations.

In essence, Opus 7 is not one show, it is two hour-long pieces linked thematically – with a half-hour interval in between, which gives the company time to transform the space completely. Part one is called Genealogy. The whole length of the space is used (although there are some problems with sightlines, I feel, sitting at one end of a very long row of chairs). The tubs of black paint thrown early on at the white wall create dripping silhouettes representing fearful and scurrying residents of a Jewish ghetto. Photographic images of real ghetto Jews are projected into the gaps, and a row of black suits hang in other gaps. There is a further layering as performers interact with the 2D images, often creating hybrid 2D/3D pictures. Images of burning fires, heaps of children’s shoes, shredded paper, and that ominous guard rolling the pram. We don’t need words to tell this story – it is sadly the story of the Jewish diaspora throughout Europe in the 20th century. ‘Shot by both sides’ we could say, musing on Russia’s treatment of its Jewish population (Hebrew banned, schools closed, books burnt, and then worse under Stalin). And then, the enemy without as well as within, as the Nazi regime attacks Russia.

After the interval, Shostakovich takes a different tack, focusing specifically on that composer’s troubled relationship with his motherland. He’s played by a petite young woman, and later by a small puppet engulfed by the enormous bosoms and skirts of the Mother figure – a towering puppet that has the magical ability to shift from grandmotherly piano teacher to terrifying commandant in just the blink of an eye. Part one of Opus No. 7 is disturbing and exhilarating in equal measure, but part two ups the ante considerably – perhaps because the story is so clearly told in sound and vision. At the start, a group of workmen drill and hammer a rickety oversized piano set in the centre of the space. Beneath it are the torn and stained ‘white walls’ from part one. The piano is mounted by a small figure in round glasses, overseen by the enormous Mother – all smiles and nods at this point, but a menacing presence none the less – and Shostakovich is there with us, starting on a career which is always overshadowed by his troubled relationship with Mother Russia.

You don’t have to know that the composer was at various times in his life feted by the Russian state and given prestigious awards, then at other times ostracised and vilified – it’s all here in the image of the enormous badge pinned on that pierces right through his slight body. The infamous debut of the Leningrad symphony, written about a city that Shostakovich apparently claimed ‘Stalin destroyed and Hitler merely finished off’ comes to life here in that extraordinary bumper-car piano sequence, the enormous metal wrecks wheeled at full speed through the length of the space. It is easy to imagine Nazi bombs falling on Russia’s cities, and the desperate and depleted musicians from the orchestra dropping dead from exhaustion and hunger.

Opus No. 7 could be held up as a shining example of how stories can be told in sound, physical action, and visual image. The work of Kantor comes to mind as a comparison – a true marriage of visual and performing arts. This is a monumental piece of theatre – what a joy to see such marvellously visual, physical, visceral storytelling taking centrestage at the opening of the Brighton Festival (and also being presented at other UK festivals throughout the spring and early summer months).