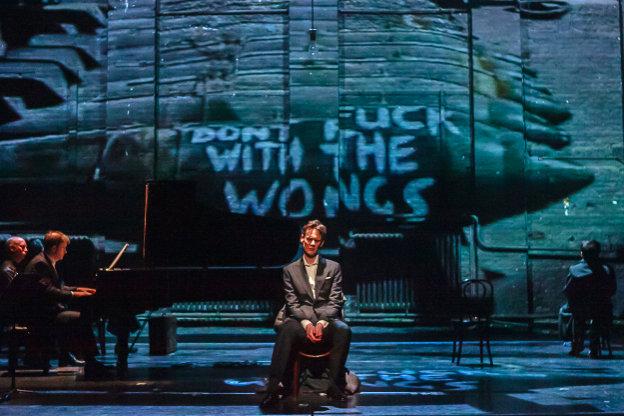 Directed by Neil Bartlett and staged amid the sombre shadows and silhouettes of Paule Constable’s lighting design, Britten: The Canticles is an intense evening of music visually animated by physical theatre, dance and film. The piece has been devised in collaboration with leading choreographers Scott Graham and Wendy Houstoun, as well as controversial war artist John Keane, with each artist staging a canticle each.

With their composition spread over nearly thirty years of his career, Britten’s Five Canticles were originally written as individual concert pieces. Here, in order to realise their full dramatic potential, the Canticles are brought together into one dramatic evening, delving into themes of sexual love, the horror of war, spiritual longing, and the struggle for self-knowledge.

At the start all is dark and silent, with one lightbulb above the stage, when we hear the soft sound of a piano and single male voice. A tablecloth is spread onto a table, over which two men share one slow kiss. Stunningly lit, striking a highly elegant ‘chap’ look, there’s a clarity and poise to the tableau they present. In this opening the style of the piece is very sombre – its colours are black, white and grey, with the bare walls of the theatre, the brickwork and the open wings all exposed. Further into the Canticles, a film of English countryside is projected, and we see aeroplanes dropping bombs. In front we see the faintly lit shoulders and stark silhouette of a cinema audience.

The voice, and piano, are exquisite, both rich and luscious and chillingly mesmerising – especially the tenor Ian Bostridge and Britain’s leading young countertenor, Iestyn Davies. At the curtain call I counted a line-up of 16 performers, only one female, the harpist Sally Pryce.

At all times, the musicians, through Bartlett’s direction, remain the central focus. It’s strangely purifying to watch – to hear and to absorb – yet all the movement/performance vignettes happen alongside the operatic song, and, ultimately, the directness and magnificence of the voice is what takes one’s attention, and anything else is somehow on the side.