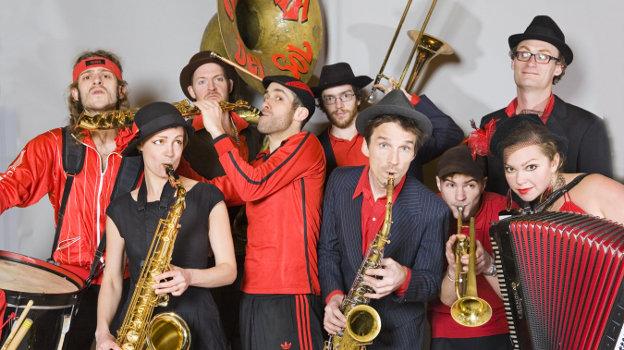 Recommended Reading As we enter a very lively and packed Spiegeltent – one of a group of mobile venues that are in St George’s Square, the Assembly’s temporary home due to its usual HQ on George Street being requisitioned – we’re issued with Top Trumps cards. You remember those don’t you? Collector cards that pre-dated Pokemon and which usually featured things like racing cars and their attributes? My Orkestra del Sol Top Trumps card says: ‘Sincero Minimo – Soprano Saxophone’ who boasts a lung capacity of 8,500cc and ‘instrument length’ – no missus, please, no tittering – of 0.68m.

go The band bounce onstage, a beaming posse of musicians male and female, clutching a motley assortment of brass and percussion instruments, and clad in fetching black and red outfits that range from the sporty to the smart to the eccentric to the downright loopy. There are hats aplenty! And off we go into a rip-roaring set that includes Gypsy jazz, waltzes, polkas, and other Balkan-ish beats.

browse around this web-site The Top Trumps card idea is the theatrical throughline, in as much as there is one, with musicians competing against each other in the various rounds to establish who has the greatest lung capacity, speed, range, or instrument length (ooh there you go again, tittering…). It’s reminiscent of the mock-contests held by the likes of Fanfare Ciocarlia, who this year took on Boban Marcovic in the Balkan Brass Battle. All well and good, but I wonder where the audience’s cards come into all this, they don’t really get referenced much…

But Orkestra del Sol really come into their own when they abandon this funny little game and move into the territory they’ve made their own: really working the audience into participating in the dances. They get everyone joining in a simple routine, then manage very adeptly to get us all partnered up and waltzing. The whole place is heaving, and the band (on this their last night here in Edinburgh) get a rapturous round of applause. I’d say ‘standing ovation’ but we are all already standing – and most of us are dancing.

All jolly good fun, but I have a few reservations (purely from the ‘theatrical elements’ viewpoint, being as they were shortlisted for a Total Theatre Award in the Innovation category!)

The first reservation is that I feel that when it comes to embracing theatre within their work, the environment that works best for Orkestra del Sol is the street or park. I’ve seen them work their way through a crowd at numerous street arts festivals, and the way that they integrate the audience into fictional scenarios such as a wedding party waltz are absolutely beautiful, and far more genuinely theatrical than this rather corny Top Trumps game.

I’d also say that if we were really looking at musicians who are innovative in the integration of contemporary theatre/performance concepts into their work, then we have to hold up as examples such luminaries as Björk, Sufjan Stevens, Jonsi of Sigur Ros, or even the Dresden Dolls. Perhaps it is unfair to judge the band as failing to live up to a tag as ‘innovative theatre makers’ that they are perhaps not even interested in pursuing; but it was on that basis that I was there to see and to judge…

That said, if we are talking instead about a good night out dancing to cheery music played with passion and panache, well – Orkestra del Sol are absolutely fabulous! Long may their sousaphones sizzle!