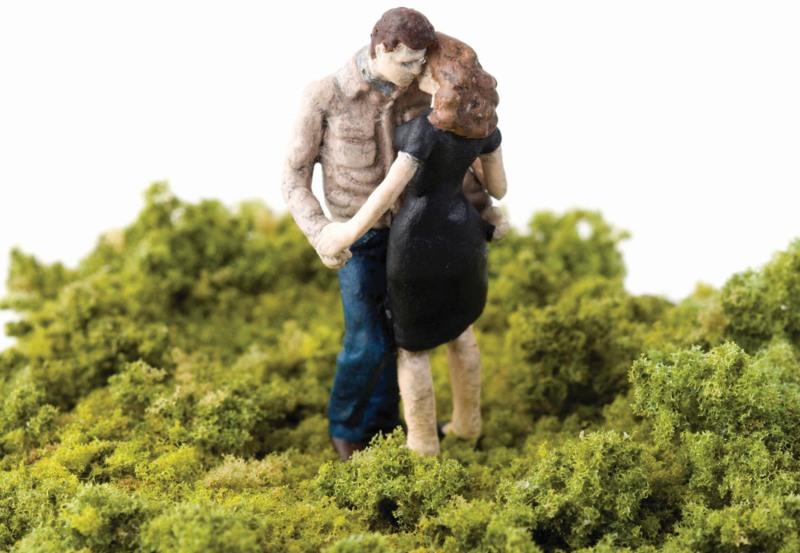 A new production of Duncan Macmillan’s 2011 two-hander forms part of a repertoire of four plays to be toured by Paines Plough’s pop up venue Roundabout. The shows, all performed by three actors and in the round, open in Edinburgh before they start their autumn itinerary.

Directed on this occasion by George Perrin, the production features Sian Reese-Williams  and Abdul Salis, a pair of consummate performers who seem to rise to the task of delivering temperamentally juxtaposed vignettes from a life of a couple with remarkable skill. Though I cannot compare it to the original much-lauded production, I can safely say that the strength of the writing itself shines through once again with a dazzling brilliance, especially as it gradually draws out what begins as a mundane ‘conversation’ into gut-wrenching poetry of completely timeless significance. This is the key that Perrin has taken to the play as well, brushing off various references to the ‘here and now’ of the characters in the play – so for example, when they are in the restaurant, all lines referring to the food and the eating are played down as obviously less significant in a non-naturalistic rendition of the play. It is as if we are listening to a radio play being spoken by actors who move through a series of seemingly insignificant but carefully choreographed spatial configurations within a circle. Deliberate decisions which are possibly more illustrative of the subtext than the text are made about whether the actors are both standing or sitting or crouching, facing each other or not, and their grey and blue clothes seem to leave enough scope for us to invest the visual world of the piece with our own imagination. Nevertheless Perrin’s production stops short of proposing any of its own stage metaphors – this is still a director at the service of the text, though the refreshing aspect of his approach is that it seems to treat the text as spoken word material rather than a piece of realism.

There are a few more things to be said about the play itself, which although evidently written by someone with an ear for dialogue, is actually great because it manages to translate into a dramatic idiom the deeply familiar conflict situation of our day: the head vs. heart argument for and against having a baby. Thinking vs. feeling is the running theme within the play – she is an overthinking phd student, he is an impulsive musician – and the play also draws both its humour and its poignancy from this particular conundrum, and the characters’ in/ability to articulate themselves at a particular moment in time. Macmillan’s play is ultimately well served by the production as a whole, but especially by the actors who deploy very limited resources to deliver nuanced, dynamic and memorable performances.