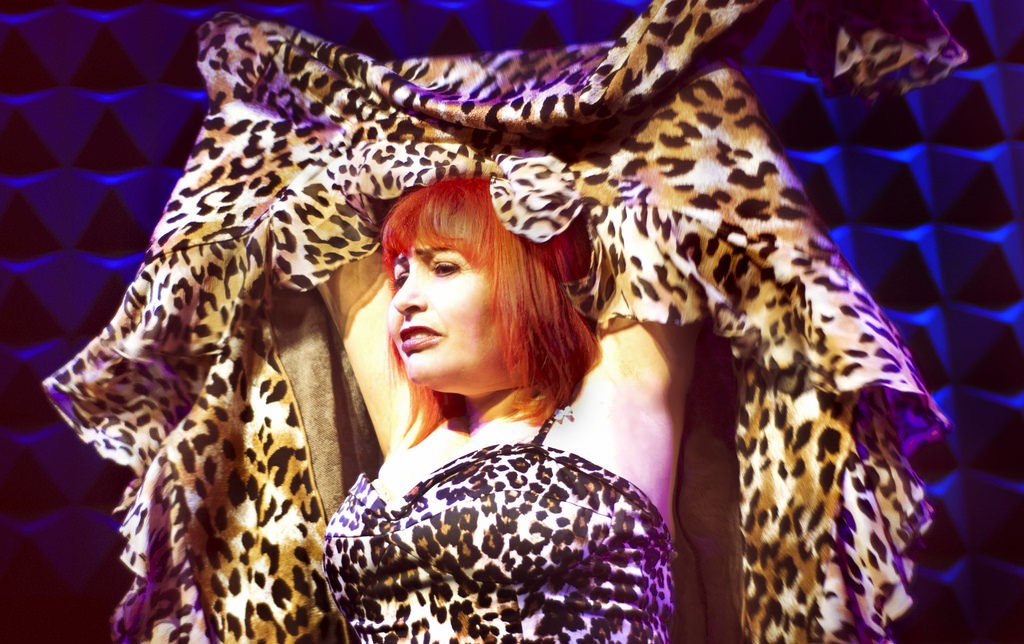 Penny Arcade (Susana Ventura) is a queer performance art legend and an endlessly fascinating performer.  Having left small-town America for adventures in New York City, she self identifies in her first few breaths as the Evil Queen, an antidote to Snow White’s dull conformity, and defies easy definition. Sliding easily between cabaret, poetry, and performance art, she riffs on her chosen themes with a passion that is absolute. This distinctly alternative show fits the underground-style space within the Underbelly perfectly, evocative as it is of the New York warehouse parties referenced by the piece, an atmosphere reinforced by its rock’n’roll soundtrack.

Unapologetic about both her search for pleasure and her radical values, she begins by launching into an amusing critique of the gentrification of NYC, the now clean streets symbolising a repugnant sanitisation of thoughts and ideas : a development of some of the central themes  explored in The Girl Who Knew Too Much). This takes us into an extended exploration of the city’s nouveau ‘cupcake culture’, now that there’s a café on every street corner and personalities can be reduced to flavours. This analogy is intriguing and comedic, and Penny’s powerful opinions in this heartfelt, lambasting monologue sweep us along in their wake.  It makes for charismatic and heartfelt performance, but its polemic can also feel frustrating as well as provocative.

Penny goes on to interrogate the subjects of the mass hypnosis inherent in advertising techniques and our consumer culture, placing herself as part of ‘the control group’: someone who hasn’t watched television and seems outside of these influences. She also explores youth culture in detail, making some sweeping statements about today’s twenty-somethings, characterised as fragile, fearful of youth fading, and averse to risk, and sets out the notion that we are all victims of our own biology and the animal brain. These are not opinions everyone would agree with, and indeed can at times seem quite reductive, but presented with such verve and conviction, they prompt a warm audience reaction.

The most intriguing part of the performance for me was hearing more about Penny’s own background. She explains that she once took drugs every day for five years and charts her lifestyle as she grew up in New York, a city as brutal as it is exciting. She is also very clear on her definitions of the ‘longing’ of the title, which is not passive like nostalgia, but rather a permanent sense of life’s losses. Yet ultimately the message is positive, and if it is messy or a little flawed in part, so too are the elements of human nature that Penny explores; we are urged to remain individual and authentic at all costs.  Now that’s a radical, rock’n’ roll message for these commercialised times.