Time travel! Yeah yeah yeah. Sci fi. Hang on, just think about it. That note on the fridge: Buy Milk. It’s an instruction from a past self, time travelling into your present reality. And when you fell asleep last night and slept a straight eight hours – isn’t this a kind of suspended animation, allowing you to hurtle forward in time from one day to the next? Every time you open an old diary, or read a letter you wrote decades ago – isn’t that a wee wormhole back into the past? Don’t we all time travel all the time, at varying speeds?

And so Rosy Carrick eases us in gently to the notion that travelling through time may be something other than the wacky quantum physics /sci fi territory of Steins Gate theories, black holes, and tachyons. Oh but having seduced us in, she then gives us the quantum physics alongside a declaration of her love of Bowie and Rocky and every film ever about time travelling, and a delightful exploration of how we can all learn from our path selves, and project optimism and hope to our future selves…

Rosy is a highly personable host, and the calm confidence and smart humour of her storyteller is exactly what you need to to be brought onboard the good ship time travel. There is no acting required or involved (thank the Lord) – hers is an embodied performance mode that presents this Rosy here before us, and the many other past and possibly future Rosies we meet in this thrill-filled hour, without the artifice of over-emoting, or stepping into the shoes of other characters in the story. Frankly, it’s a relief – so many solo autobiographical theatre pieces struggle to find the mode of storytelling most effective for the telling of the tale, and Rosy gets it just right, leaving us delighted to have heard so much about her life, rather than squirming in our seats, embarrassed about the over-sharing, as is too often the case with this genre of work.

She’s a very clever and resourceful young woman, having (amongst many other achievements) written a PhD on the work of the Russian poet Mayakovsky, and overseen the translation of his work into English – but she wears her learning lightly, and the Rosy who gets too drunk too quickly and sends sick selfies to her friend James is just as important a character in the story, as is the Rosy who got pregnant when still a teenager and raised a daughter as a single parent, and the Rosy who became obsessed with the CERN Large Hadron Collider… cue Nick Cave’s Higgs Boson Blues.

All of these Rosies live out their parallel lives in the multiverse that the Rosy in front of us creates so elegantly on stage. Her setting is a simple one – a suitcase, a video screen, a table. On the table, a laptop, on which Rosy exchanges emails with a mysterious stalker Year Solver; books, including a precious gift from Mayarkovsky’s daughter, herself a wormhole allowing Rosy to experience early 2oth century Manhattan (Rosy steals some of her hair in the hope of one day cloning her); and photographs (another form of time travel) of the people that have inspired her, these portraits turned over one-by-one throughout the show. Mayakovsky, of course. And David Bowie, whose lyric line ‘Oh no love, you’re not alone’ pulls her through difficult times long before she has even heard of Bowie – first encountered as scrawled graffiti on a wall outside a public library when a 7-year-old Rosy was sexually harassed by a much older boy. Cue Bowie’s Rock n Roll Suicide.

Letters written to yourself are the key motif of the piece – these taking many forms. A very young Rosy’s promise to ‘always look after you’ written to her future self is  heartbreakingly beautiful. There’s a clever, twisting story weaving through the whole piece about a letter that might possibly have been written by a future Rosy who’d time travelled back to just before Mayakovsky committed suicide to contact the present Rosy…

So, on this stage in which past, present and future collide, Rosy cleverly manages to unite all these threads, solve a few mysteries for us, and even to dance on the steps in front of the Philadelphia Museum featured in Rocky III. Who wins? Rosy! 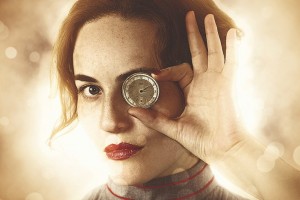