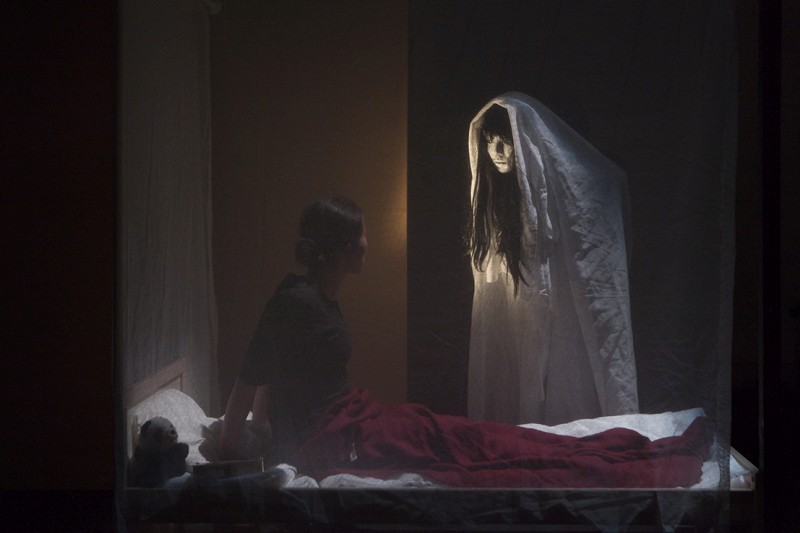 ‘Hello? Is anybody home?’ says the woman as she enters the space, furnished with 1970s dresser, television set, and table. A large dark mirror above the dresser, and wardrobe doors, are significant hints of secrets to be revealed, and a screened area turns out to be a small bedroom, with Japanese paper screens behind.

Immediately a series of images appear. Who is the small girl that suddenly appears in the bed? Why does the woman see another face in the mirror? Who is the mystery face in the television screen? What is the dark secret lurking in this woman’s past?

The word Kwaidan is Japanese for ghost story and there is a great build up of tension, suspense, and looming horror in this cleverly designed two-hander. The audience is kept on the edge of their seats, never quite knowing what is going to happen and which of the cleverly rigged and performed image effects is going to appear next. Full size puppets, shadows, video, and effects are used to play the various characters in the story. Highly directed lighting, with plenty of use of blackout, plays with audience perception. The music used in the piece keeps the tension nicely building and there are one or two ‘jump scares’ that make sure the audience doesn’t get to relax in their seats.

Without giving away any spoilers, the plot hangs together well, and the hints of bloodshed are well timed. Aya Nakamura plays the central character and does a great job, often having to play more than one character onstage at the same time. The effects and shadows are performed by Mohsen Nouri. Both Aya and Mohsen are excellent puppeteers and it shows as they both operate various characters throughout the piece.

It’s early days for this piece of theatre directed by Paul Piris and levels of finesse are still being discovered to bring out fully the psychological journey of the main character and the full impact of the climactic scene. However Rouge 28 have created something of a classic in the puppetry mystery horror genre.