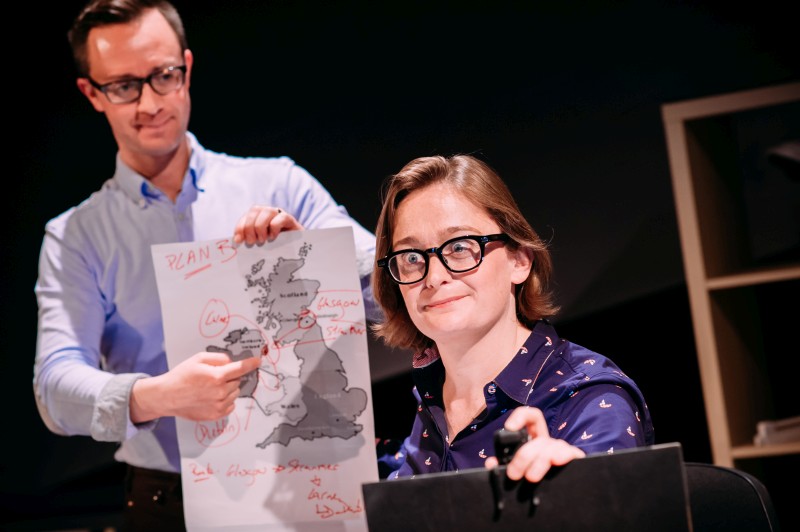 Writer and performer Sonya Kelly had a Dublin Fringe hit with The Wheelchair on my Face a few years ago, an autobiographical storytelling piece about her eyesight. A mix of stand-up and memoir, the show confirmed Kelly as a writer of wit, well able to connect to audiences’ hearts.

How to Keep an Alien is again based on real life. Kelly recounts her life’s love story – a chance meeting with ‘Kate from Queensland’ whilst working on a play. Kate’s visa was up a mere few weeks after their encounter, and so began an odyssey of immigration, deportation, head and heart getting constantly mixed up, and a fight against red tape.

Kelly is joined onstage by Justin Herbert ‘playing’ her stage manager. He provides her with props, cues the sound, and occasionally plays a variety of parts as well as offering a good talking to when necessary. His presence onstage, diligently following the script, lifts the piece from generic autobiographical storytelling to frame a pleasing theatrical form that’s always aware of itself. In a hilarious moment, Justin gets his own song – he almost steals the show.

But he can’t quite beat the Sonya and Kate love story. Kelly’s writing is pitch-perfect. Her self-awareness is paramount to her success, and she has it in spades. What could be a cloying and cheesy show becomes gloriously funny and quietly profound. Drawing on letters from Kate’s ancestors who emigrated from Ireland in the 1850s, their experiences in the immigration office (that throw up uncomfortable questions about the right to live somewhere), and searing honesty about the difficulties to love someone, Kelly gently weaves together a moving portrait of fighting tooth and nail for that love. The final sequence brings the real-life world into the theatre via projections of Sonya and Kate – I couldn’t help but well up.