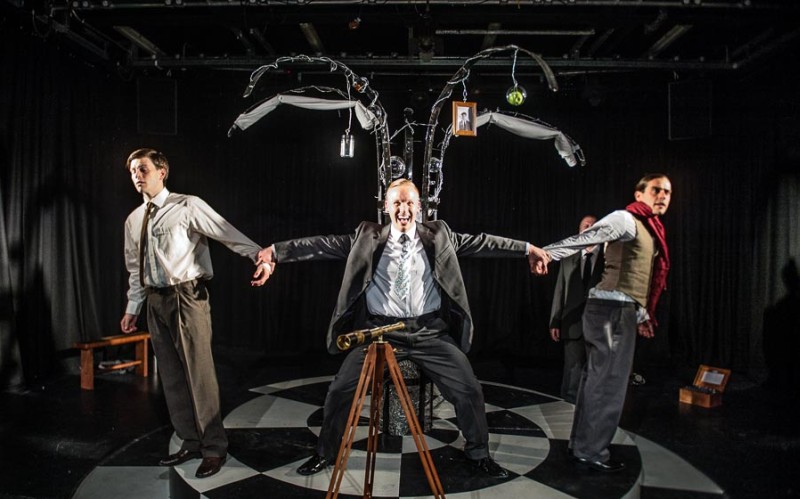 This powerful, affecting work interrogates the boundaries between man and machine through exploring Alan Turing’s life, achievements and eventual persecution based on his homosexuality. Best known for his instrumental role in cracking the German’s Enigma cipher during his time at Bletchley Park in World War 2, fiercely intelligent Turing also taught at Cambridge and developed the Turing Machine, the theorem considered to be the basis of modern computation, before being arrested and tried for homosexuality in 1952. His punishment or ‘treatment’ was horrific chemical castration, which significantly affected his ability to think and eventually contributed to his tragic suicide in 1954.

To Kill A Machine opens with a brief introduction to Turing’s life, quickly introducing him as a precocious child who cannot conform and is frequently advised to learn what others’ expectations are and mimic them in order to try to make friends. This is a recurring theme as Turing enters secondary school, where events are played out at breath-taking pace and with effective use of physicality and a stunning set comprising of a tree-like ‘machine’ on which props and key artefacts can be hung. Here at school Turing meets Christopher, a boy who clearly has a crush on him, played beautifully by Francois Pandolfo who brings a quiet tenderness to these interactions. Yet Turing is far too busy asking questions to notice this, absorbed by questions such as ‘what is a man and what is a machine?’ and ‘do you think a machine can think?’ Here too, the concept of imitation is introduced, framed by a sinister ‘gameshow’ device based on the concept of ‘the imitation game’, where an interrogator asks (clichéd) questions to two hidden people and has to guess who is male or female based on their responses. Turing wonders if a machine could play this game and if it could lie in order to fool the interrogator.

Later, we see Turing as an adult, removed from Cambridge to Bletchley Park at the behest of a sinister-seeming government official who hints repeatedly at ‘secrets’ Turing may have. Worried that Turing is a ‘risk’ due to his ‘tendencies’, the government send a ‘Betrayer’ in to seduce and ruin him.  Rick Yale brings this character to life with breath-taking energy and physicality, creating a wholly believable villain who has sex with Turing then burgles him. Turing reports this to the police, inadvertently admitting that he ‘had relations’ with a man and thus ending up in court. His options are limited as a result to imprisonment or chemical castration. He ‘chooses’ the latter and a very brutal but effective scene shows its implementation; again in gameshow mode two ‘hosts’ insert drips and tell homophobic jokes. Because he doesn’t laugh, Turing is dehumanised by the hosts, and by being likened to a machine his treatment seems acceptable to them.

The denouement is gut-wrenching and inevitable; Turing has been unable to follow the ‘rules’ laid out by society, first due to his sexuality and secondly by refusing to lie about it. ‘Only a machine follows the rules it has been given’ he cries in an extremely powerful closing monologue, asserting that to be successful a machine must also learn to lie, something that he himself has not been capable of. Gwydion Rhys’ portrayal of Turing stands out as being gripping and fully committed; at the bow he seems wrung dry by the performance.  Writer Catrin Fflur Hughes’ script captures the speech of the era exceptionally well, and complex mathematical ideas and themes are introduced in an inventive, engaging manner. Along with the strong visual aesthetic Lee’s direction brings,  the writing mixes the abstract with the naturalistic with skill, creating a poignant piece that by exploring the nature of machines, raises many questions about what it is to be human.