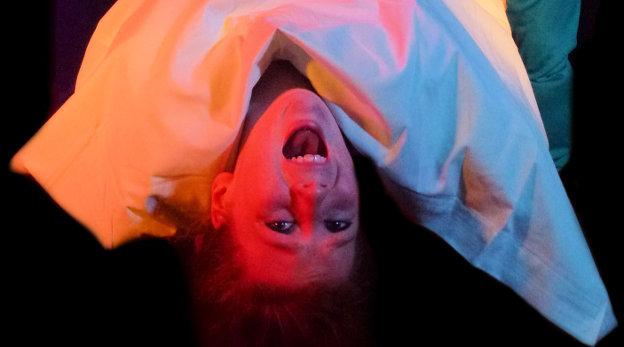 The impossibly awful Val opens the proceedings by ranting at Jess for taking lunch-breaks and for her pedestrian progress in her work. As she goes off to complain to the MD (again), her sweet and new-agey colleague Erin sympathises, and speaks admiringly of Jess’ relationship with her boyfriend. The scene is set for a piece that explores the disparity between our lives and our dreams – but as it turns out both are full of chaos, and Second Impression discover some very funny comic dialogue and set pieces in either world.

The actors were sure, crisp and clear when delivering their declamatory dialogue. Val’s diatribe and Jess’ ripostes are in themselves exaggerated, with a slightly unrealistic bluntness chracterising Val’s haranguing. The minimal set enhances this displacement of the real. The idea, I guess, is to demonstrate what is really going on in this office and these people’s lives, rather than hinting at it under the surface. This segues into the dream sequences quite nicely, as the play takes on a more nightmarish and surreal atmosphere.

The first dream escalates the comedy. Jess’ boyfriend’s new ‘best friend’ warns us that he wants proper applause for the minor operation he is about to perform, without anaesthetic, on Jess’ toe. Pain relief, he tells us, will be provided by a cuddly toy distraction, and Val, transmogrified into Sal, waves a huge fluffy bunny in Jess’ face. The surgeon – Al – invites us to practice our applause, berates us for not doing it well enough, and whips the audience up into a frenzy for the operation itself. It works as comedy – the audience enjoys it immensely.

Then as Jess falls asleep, her ‘dreams’ come true: she rids herself of boorish boyfriend Pete, Val transforms – but all is not well. The play is, I think, exploring different kinds of dreams: dreams as understood by our New Age positivity; daydreams of the trapped and dissatisfied; and dreams proper where the psyche runs amok.

There’s some great comedy here, and the piece deftly exposes the worst of self-improvement blarney. (‘It’s your job to manage your manager,’ says Erin, ‘theyare the ones with insecurities – that’s why they become managers.’) In the end, though, I came away not quite satisfied: I’d laughed a lot, and the dialogue was witty and well-played, but the play didn’t seem to settle on any resolution other than that the world of dreams was much more dysfunctional than everyday life, which is bad enough for Jess anyway, trapped between a rabid boss and a boring boyfriend. And as for those attempts at self-improvement: they are just as silly and random.