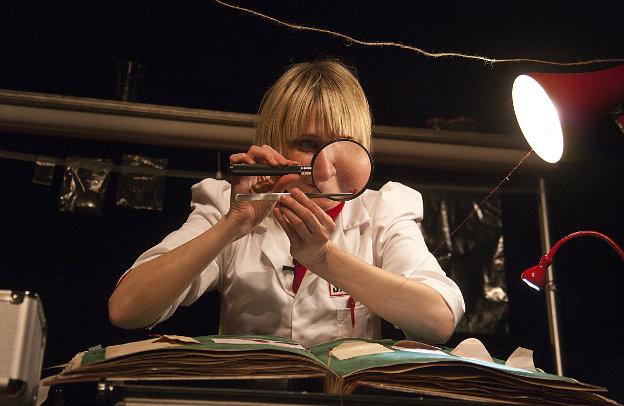 It is always a delightful experience to watch a show where the line between spectator and performer is tenuous to the point that the audience believes that they are participating in a dialogue, and not watching a theatrical presentation in monologue form. That’s what happens in The Curious Scrapbook of Josephine Bean, created and performed by Shona Reppe – we feel really spoken to, and we feel that we are involved with the performer in the creation of the story.

Presented as a lecture by a scientist specialising in the excavation and examination of scrapbooks (the science of ‘scrapology’) this piece, aimed at older children, has the power to enchant both young and old.

The smartly turned out Patricia Baker (Shona Reppe) is a ‘scrapologist’ investigating an old and faded scrapbook that has been unearthed, with the intention of discovering who it belonged to, and this person’s story. Gradually, with a nicely pitched forensic tone, she discovers that it was in the possession of a Victorian gentleman named Artemis J Mood, the presumed owner of the scrapbook, who, it emerges, seems to have had a secret romance with a lady called Josephine Bean. Thereafter a full ‘forensic’ investigation takes place, and the very curious life and love of these characters is, little by little, unravelled. To reveal too much would be to spoil the show, as the manner in which the secrets hidden in the scrapbook unfold is truly magical.

The stage is set up with the scrapologist’s work-station, from which hang all sorts of interesting objects, along with an OHP, two screens and a projector. A renowned puppeteer, Shona surprises us with a play without puppets which is, nevertheless, ‘puppetesque’, using the skills that one would expect from an experienced puppeteer in her handling of the objects around her workstation and the artefacts that emerge from the scrapbook (photographs of Artemis which turn out to show something unexpected when re-examined; train tickets that turn into a little train chugging across the screen; feathers, seeds, and seaweeds that have their own tales to tell). The story unfolds very cleverly, with sudden moments of awareness dawning about something that occurred earlier. It’s as if she worked on the intangible to whet our imaginations so that we, along with the performer, build the story of Artemis and Josephine’s relationship.

Care and attention has been given to every detail in the show – the text, the scenery, the objects, the film, the music and everything else that contributes to create this charming and intimate atmosphere. As a counterpoint we have the character of Patricia Baker, a friendly scientist who can become extremely authoritarian from one minute to another. This interesting and very real character contributes greatly to the sense that we are not being patronised by the performer, a very common hazard in theatre for children.

A truly sensory and thought-provoking piece – a great piece of children’s theatre that is not just for children.