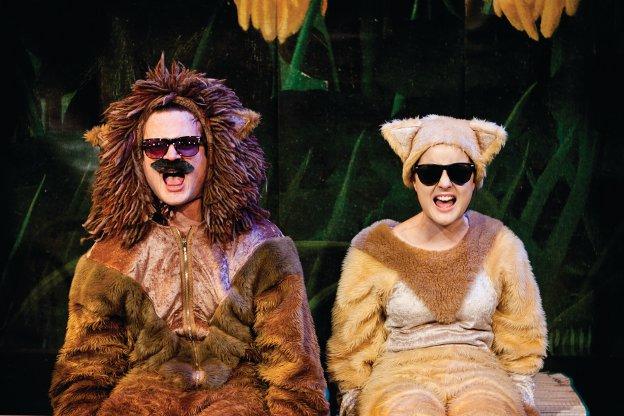 Shamelessness is sometimes a virtue. Imagine a group of actors dressed up like lions, but not real lions, no – dressed up in bad fancy-dress lion costumes, as if entertainers at a children’s party. Then, imagine these actors performing almost naturalistically, almost as if they were at home, discussing private matters.

Now let’s give them a story: let’s see what happens to these guys/lions placed in a sort of crossover between lion and human society – a society where a man thinks he is the boss, but is not. Not the centre of the universe, and the source of power no longer. Of course he plays at being the boss, being in charge, but when it comes to it, when his moment has passed, he has to go, stripped of all his possessions and his beliefs, superseded by a younger male, a usurper who steals his wife and his house.

On one level The Pride – performed by Side Pony from Perth, Australia – is just a comedy, a lighthearted comedy in which the performers have lots of fun making the show for us, almost like an inconsequential game created for self-amusement. But it is far more. It goes deep, and then deeper, into gender-role discussion, into the mores of male behaviour, and into the irrefutable fact of ageing in a world in which youth is everything.

The story is a simple one: a young couple of lions (Bruce and Linda) have been married a while and are building up their home. The female gets pregnant and gives birth to a dozen little lions (to the tune of Everlasting Love). She needs help and is waiting for her sisters to come and live with them to help out. The male has to fix up the house and improve it for the guests but he, as the strong-self centred-male, just cares about himself and his favourite male son – although he has just about managed to install dining-room lights (with a clap-on, clap-off feature). Suddenly a young male arrives on the scene who offers to help him paste up the new jungle-feature wallpaper. Time passes and the male that owns the house gets older and lazier, always defending his territory, but the fact is that he must be replaced by the younger one, and – after a desperately funny dinner party (featuring a blood, rather than chocolate, fountain and gazelle cake!) that ends in disaster – that is just what happens.

The wonderful thing about this play is how this group raises important issues using a format that is not so far away from Disney’s Lion King; how they’ve built it and transformed it into an extremely funny, and at the same time incredibly serious play.

The construction of each character, and of this manipulated and mannered naturalism (which seems naturalistic, but in a very subtle way is not) is the key to the success of the play. They have, in their onstage world, created a parallel society with parallel behaviours which don’t quite match ours, but which expose a ridiculousness in our society.

The group explores, in a very sweet way, the sadness of becoming useless in a society that idolises youth, and at the same time offers a reflection on gender politics in the contemporary world. The Pride is a very cleverly devised and successful piece of theatre work.