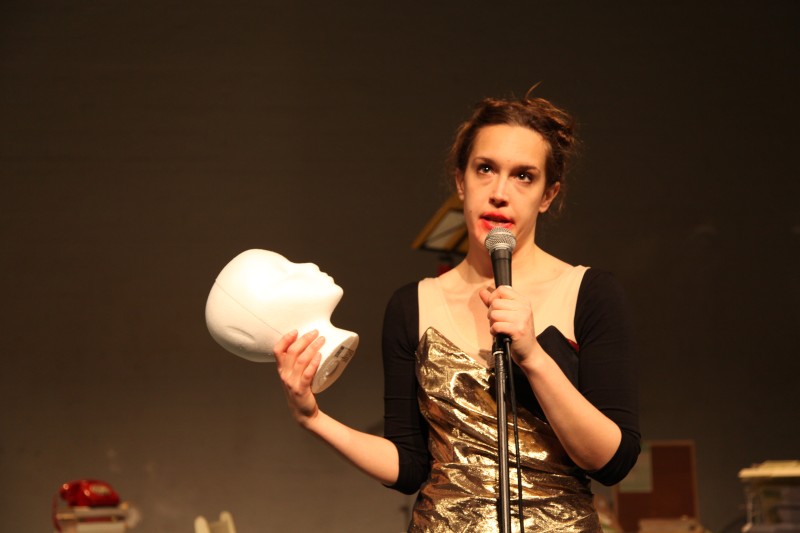 In the wake of several recent and highly successful biographical films about women performed by high status actors (Streep – Thatcher, Mirren – The Queen and less recently Woolf – Kidman), it is interesting to see Susanna Hislop here working within that genre with her collaborator Anna Ledwich and seeking her own autobiographical story within the biographical and historical accounts of these iconic women: Margaret Thatcher, Marilyn Monroe, and Virginia Woolf. These three muses serve as the stimulus for this devised piece, which has gone further than much devised work, which requires many drafts and lots of throwing away. There is still more to throw away here concerning the stimulus, especially when in this case you are eventually drawn into the performer’s own personal story of mental illness which is far more interesting than the stories of her celebrity helpers.

The piece begins with a voiceover introduction from Susanna explaining that this is a play about her making this piece. So we know where we are: very firmly in process and, as it turns out as the piece progresses, within Hislop’s therapy. She enters in a costume reminiscent of the game of Consequences: head is wig of Marilyn Monroe, upper body is jacket and rosette of Margaret Thatcher, lower body, knickers, and wellingtons of Virginia Wolf. The stage is carved up similarly: stage right Monroe’s terrain, stage centre Thatcher’s platform, and stage left, Woolf’s kitchen, later denoted by a washing pail and stones.

After a self-deprecating apologetic introduction about a wasp sting, nothing to do with the show – she says – but everything to do with procrastination, revealing a performed reluctance to get on with it, Hislop finally dives into the piece, taking on and imitating the three muses with confidence and conviction, with asides to Streep and Kidman. She is an accomplished actress with strong skills (she’s very good at accents) and an assured confidence with this very small audience. But it’s performed in a state of panic and the physical sequence allows little time for her to work with the objects on stage. What ensues skates over the eating habits, obsessions, and fears of the three subjects, for instance Margaret Thatcher’s invention of Mr Whippy ice cream. Food obsession seems to be the main theme here. There is a long sequence about food where all the food references relating to each character mix and match (again the Consequences motif). We finally get to the crux of the piece: Susanna Hislop’s mental state and how she became diagnosed with a mental illness, demonstrated through her obsession with weight, her paranoia about lacking a boyfriend, and her obsession with connections. She reveals an intricate research flowchart pinned to the back of one of her many filing cabinets that could be construed as the scribblings of an obsessive but is the thought processes that have informed the development of the show, harking back to her introduction. As a young Anne Frank fan one understands her reading from her young adolescent diary, but I would have preferred insight from the older woman rather than a loose and unsustained allusion to a fictional character, in this case, Adrian Mole – again evidence of the need to weed out some extraneous material. The women she is obsessed with are projected onto her relatives, and we learn about her alcoholic grandmother and ultimately her personal desire to be a good and successful actress. Through this confessional monologue we forgive her and are even complicit with her in choosing her final fantasy, the Oscar acceptance speech. One of the most powerful moments I felt was her exit which, like her entrance, was protracted – but the sound of her voice over the microphone in the corridor made me think she has a creative fever which never lets her go.