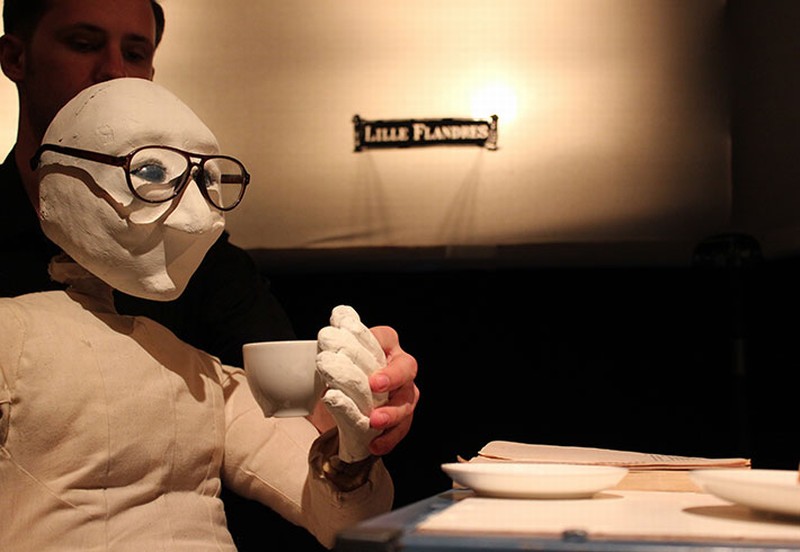 This is a technically accomplished and emotionally moving puppet show for adults and older children, which tells the story of one man’s journey into life with Motor Neurone Disease. A story based on this subject may sound like a hard sell, but the piece has a humour and inventiveness that handles the material in a considered and engaging way. It also makes ingenious use of set and props and is performed in an understated yet assured style that feels just right for this story.

can you buy Lyrica online We first encounter the main character, Ted, as a bunraku puppet, who speaks to us through his computer generated voice (of the kind used by Stephen Hawking). This well-made puppet is handled with care and close attention, and brought to life with some subtle and effective touches. The narrative moves back to the time where we see Ted living a gentle, solitary life, indulging in his passion for stamp-collecting stamp and having some very amusing interactions with his pet goldfish. Gradually the symptoms emerge and Ted receives his diagnosis. His response is to make the best use of his abilities whilst he still has them, and he sets off on one final adventure across Europe.

visite site Throughout the story he shares occasional looks and gestures with the audience, which add humour and maintains our empathy. The character is also represented through elegantly made shadow puppetry, and the storytelling moves between these modes of delivery throughout. Great use is made of the minimal props, including highly amusing and inventive use of live foley sounds to augment the action. The pre-recorded soundtrack is also very atmospheric and lends the production a deeply emotional tone. At points, torchlight in used to wonderful effect in a variety of ways, particularly to depict the actual mental processes involved in the disease.

craigslist minnaplos women seeking men I felt there was some scope for an extra level of subtlety with aspects of the puppetry to move it to the highest level, and the story is quite slow moving at times. However these are minor quibbles, and overall I was very impressed with the sophistication and ambitious treatment of the subject, especially given the apparent youthfulness of the company. Towards the end, as the disease takes away Ted’s final capacities for movement, the puppeteers leave him in the chair, and his looks towards them as he realizes the significance of the action provides a truly moving moment. However, this is not a tragic tale; indeed it is more likely to provide the inspiration to make the best use of whatever time and capacities are available to us.

Matt Rudkin is a theatre maker and teacher who creates work as Inconvenient Spoof. He has a BA in Creative Arts, an MA in Performance Studies, and studied with Philippe Gaulier (London), and The Actors Space (Spain). He was founder and compere of Edinburgh’s infamous Bongo Club Cabaret, concurrently working as maker and puppeteer with The Edinburgh Puppet Company. He has toured internationally as a street theatre performer with The Incredible Bull Circus, and presented more experimental work at The Green Room, CCA, Whitstable Biennale, ICA, Omsk and Shunt Lounge. He is also a Senior Lecturer in Theatre and Visual Art at the University of Brighton.