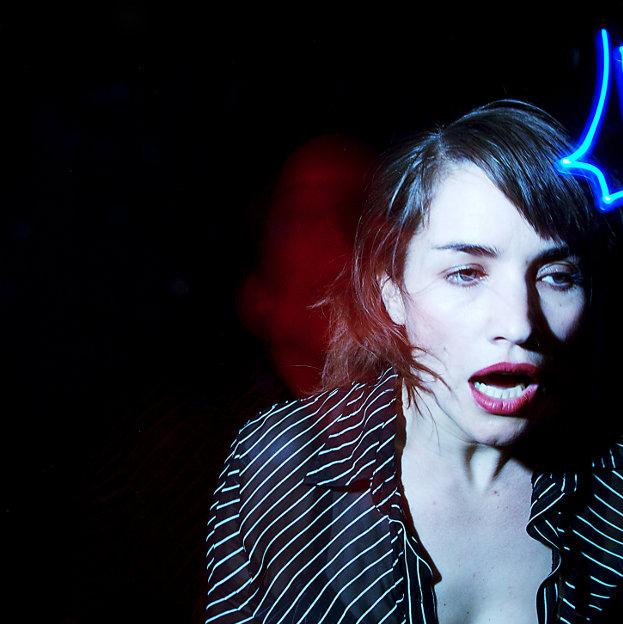 Fringe First winner Rachel Blackman draws her three Stillpoint Theatre solo pieces together for the first time at the low-key CPT; striped over the week, then all in a day. Saturday’s performances begin with The Art of Catastrophe, an autobiographical slideshow by photographer Helen. As with all of Blackman’s work, there is a laudable honesty to each story, even from characters who are intrinsically dishonest. It is as though, even though they lie to everyone around them and even to themselves, the intimate medium of black box theatre draws the truth from them despite themselves.

Helen’s tale is the perfect example. Here is a woman, late in life, reflecting on her mistakes, on the moment she realised that the life she was living was not her own, and sharing that revelation with a room full of strangers. She makes no attempt to make herself sympathetic, to spin events in her favour, and we like her all the more for that. There is a conspiratorial camaraderie of flawed people. The comic, yet grotesque, characters and caricatures that surround this protagonist do serve to make her seem more sane; they lend her compassion whilst raising an indulgent laugh from the audience.

The realistic scenes are interspersed with the trademark Stillpoint rhythmic interludes. A motif of drowning brackets moments of coldness and spite from Helen so we know that this is not a woman lashing out deliberately, but in blind, internal panic.

The deceptively simple lighting design allows Blackman to make great use of the empty space and she toys with the fourth wall so that we know when we are being spoken to and when we are looking through a lens into the past. The empty rectangle of light cast on the back wall is so much more effective as Helen’s slideshow than even real photographs might be; an imagined self-portrait writ large. There is something unexpectedly satisfying in this story of a whole life (in every sense), told from outside, where a woman finds her fulfilment without her man, without money and corporate success and children and middle-class social immersion.

Steal Compass, Drive North, Disappear… fitted so well into the space of Brighton’s Nightingale Theatre when I saw it first in 2010 that I was curious whether it would travel well, but Blackman inhabits CPT like it has always been home. She begins with an exaggeratedly dramatic flourish, putting on Martin Sharon (and his jacket) with apt pomp and ceremony, before wearing him around the floor like a bejewelled codpiece.

Despite this cocksure beginning however, the Martin of 2012 is a more subtle beast than in previous incarnations; in between the absurdist abandon of the dance sequences which belie precise choreography and timing, he has become more conflicted and, surprisingly, more caring for the women he utilises and fails to appreciate.

One of the most powerful lines in this triptych comes from Martin’s biographer Soraiya: ‘I also am true,’ she says, and, although fictional, she confronts us with many truths. In a beautifully evocative turn of phrase she tells us that Martin’s story has ‘fallen on her’ to tell and that fragments of truth from Martin’s self-important stories land on her. This imagery of a life story like ash or snow, drifting down and settling on unsuspecting listeners, is the perfect metaphor for the way this trilogy comes together. With gentle humour and pathos Soraiya is the true heart of Drive North, but both she and Martin in the end turn and confront the fear they have been fleeing.

Yet again Blackman’s protagonist finds some peace, some respite from themselves, outside of their defining relationship. Although coming from the other side of infidelity, the common themes here are of the confines of matrimony, of male betrayal, of eventual redemption through finding oneself alone. This is a natural companion piece to The Art of Catastrophe and it seems the story is: we’re better off apart.

Again Blackman uses physical theatre to great effect; she embodies each character, however minor, with practiced ease and adds mimed flourishes with a knowing glint in her eye.

Finally comes The Growing Room, the story of fragile Andrea and her damaged teenage daughter Clio. There is a difference in tone to this piece. The characters are not the authors of their own unhappiness in the way that the previous two were and the wry narration, straight out of the fourth wall, is far closer to the real life commentary we offer on those we know, love and despair of, more like an anecdote of one’s own embarrassment you might recount to a close friend, and that invites immediate affection. I felt I was encouraged to identify with Andrea, rather than just observe her; there is an undeniable element of female solidarity in the story of two women from adjacent but vastly disparate generations.

Perhaps it was just that her daughter’s distress was so close to home, but I felt myself rooting for Andrea to find the answers we all know aren’t there, rather than passively waiting to see what became of her. Unwitting love interest to mother and daughter, the easygoing Antipodean Nick tells Andrea what she, and perhaps some of the audience too, need to hear: ‘You can’t save her’. Even with their flaws and misdeeds posted up in lights, all of the inhabitants of The Growing Room are so easily likeable and this makes the piece a pleasing conclusion to the triptych. Blackman’s second-person address embeds us in the piece, makes it our story too, makes Andrea’s past into our personal history.

A wonderfully comic and empathetic sequence of unarticulated self-exasperation sums up a hard to describe feeling so precisely that everyone laughed in recognition, even as the scene turned on a sixpence to become heartbreaking. Blackman really excelled herself here, laying out a mother’s desperation to heal and protect her child and the conflict of a woman wanting some love for herself too.

Each of these works is well worth seeing in its own right, but as an internally curated collection they are greater than the sum of their parts. It is only against the selfishness of Martin, the coldness of Helen, that Andrea’s self-sacrifice is visible. Blackman’s engagement and co-option of her audience becomes more notable in its contrast to the more passive viewing of Catastrophe and Drive North. Each piece percolates through the next, flavouring each consecutive situation and lending the viewer a greater susceptibility to the thematic undercurrent.

The altogether sweeter and more hopeful, conspiratorial narratives of The Growing Room have a more convincing pull coming in on the tails of the bittersweet parables of finding completeness alone that precede it. All together the triptych forms a satisfying and complimentary theatrical repast. It seems fitting that at the last love seems to be winning the day; after all we are optimists at heart.