help university essay competition where can i pay someone to write my essay do my accounting homework i didn do my homework because list pornjk.com tube600.com xpornplease.com redtube.social porn600.me porn800.me watchfreepornsex.com tube300.me

Darkness, fear, fire, terror. Specifically, the plight of civilians caught in war zones – such subject matter is still not the norm for street theatre companies, and it is difficult to convey just how shocking and extraordinary it was in the mid-1990s, when Polish outdoor arts company Teatr Biuro Podróży came to the UK with Carmen Funebre (Funeral Song). The familiar street theatre tools of stilts, pyrotechnics, big visual pictures, rousing live sound, used for purposes beyond mere entertainment…

Now, a quarter of a century later Paweł Szkotak’s company return to the Edinburgh Fringe with that legendary show, together with its sequel, Silence. 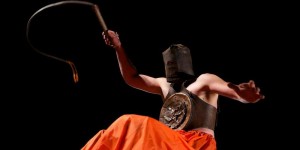 I’ve probably seen Carmen Funebre three or four times in all, and did wonder how it would fare so many years later. But far from feeling dated, it is a show that (sadly) always feels current, as you reframe it in your mind in light of whatever horrors are happening currently in the world. The show was originally devised from interviews made with survivors of the Bosnian conflict in the early 1990s. Now, you could substitute Iraq, Syria, Gaza…

Masked muscle men on tall stilts run into the space wielding whips, rounding up people from the crowd (planted actors, of course), forcing them to stand in line, strip to underwear, and enter the big grey metal gates at one end of the performance space. In another harrowing scene, a woman is captured and entwined in a long rope, pushed and pulled between a group of men who are passing around a bottle of wine and spitting on her. (And it is wine; we can smell it, just as we can feel the heat of the fire of the torchbearers, and hear the heavy beat of the drummers – this is a visceral performance, a real theatre of the senses.) It is a harrowing image of sexual abuse – just graphic enough to disturb without being so literal that we push the image away, unable to cope. Other scenes of violent confrontation and the aftermath of war are played out in similarly stylised ways: there is a wonderful image of three walking wounded returning from war, stilts becoming the men’s wooden legs with empty trouser-legs tied round them; men with photos of the loved ones left at home run up to the audience and tell us their names – ‘Gabriela’ is the one I’m shown; wooden stakes are hung with clothing that is set fire to, becoming forlorn funeral pyres. There is an ending, but there is no firm resolution… 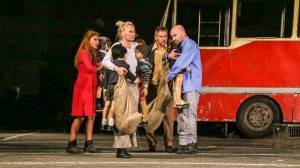 The sequel, Silence, is if anything even more disturbing. I should here say that in the intervening years there have been very many other Teatr Biuro Podrozy shows, some of which – Pigs, Macbeth, Planet Lem – have come to the UK. And to note that Silence has been seen in the UK before, at the Greenwich & Docklands Festival and Hull Freedom Festival in 2016. There are issues about the programming of work that is usually presented free to audience as ticketed work at the Edinburgh Fringe, and indeed how difficult it is to programme outdoor arts within the Fringe – but that is a discussion for another article at another time!

Silence revisits the core theme of Carmen Funebre – how the horrors of war play out on civilian populations.

There are a number of returning motifs: the figure of Death in flowing purple robes; the Gladiator style stilt walkers; a tired red carpet rolled out. Live music is crucial to both shows (in Carmen, accordion and percussion; in Silence, strings and electronica). The set, similarly, includes a large metal construction at the back of the space that acts as the key visual focal point of the piece – in this case the grey prison is replaced by a big old bus, above which, picked out in lights is a quote that appears in both shows: ‘This city has ten million souls.’

Both shows have an eight-strong ensemble of actor/musicians who here multi-task as oppressors and as oppressed civilians. Here, the stilt-walking Gladiators are still around, but they give way to khaki-clad bullies bedecked in bullet belts roaring in on motorbikes. As for the oppressed: in Silence, the actors are augmented by eight child-sized mannequins manipulated by the performers. These incredibly spooky dolls, staring ahead motionless in whatever position they are placed in, are a harrowing representation of the voiceless, frozen-in-fear, powerless children from war-torn countries whose images haunt our TV screens and newspapers.

If Carmen Funebre was disturbing in its use of archetypal imagery, Silence both updates and ups the ante – whilst retaining the central idea that horror is best portrayed through non-naturalistic images. Hence the dolls: sitting in cages, stood in a line on top of the bus, passed or thrown out of windows as flames lick around them…

There are so many gasp-worthy visual pictures created in this windy yard in Edinburgh. We shiver with the cold, but also because of the spine-chilling images unfolding. Without wishing to reveal the ending, I will just say that the image / physical action chosen, which conjures up the plight of those escaping war by trying to cross the seas on flimsy boats, is devastatingly beautiful.

I’ve heard some people say that they feel Silence is weaker, far less successful than Carmen Funebre. On the contrary, others have said that the images in Silence are too strong, too disturbing. Well now – I remember the response to Carmen Funebre when it was first seen – loved by many, but disliked by others, deemed too disturbing for a street theatre show. Carmen Funebre has stood the test of time, and I believe Silence will too.

And it is good to reflect on the influence Teatr Biuro Podróży have had on the European street theatre sector – not least, for their influence on major UK companies such as Periplum.

It was an honour to have seen both shows together, on the same evening: to compare and contrast, and to feel the power of both. Together, they make for more than the sum of their parts – a magnificent achievement. I don’t suppose war, terror and displacement are going anywhere anytime soon, so no doubt there will be more in this vein to come from Teatr Biuro Podrozy in the future. 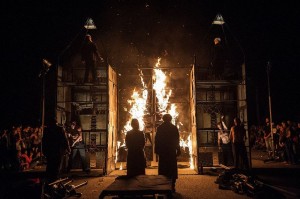