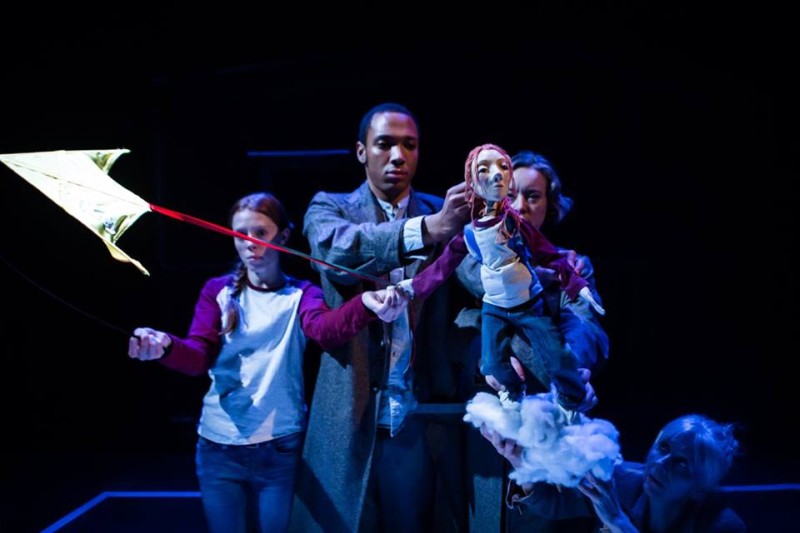 After a number of successful touring shows, including a contemporary opera for young people (last year’s Swanhunter), the Wrong Crowd have made a new piece, again for young people, which has no words at all. They say in the programme notes that ‘this suits us well as visual theatre makers,’ and you can feel the freedom in the making of the show: everything is malleable, everything here is at the service of the storytelling, a sweet and simple tale of accepting life’s changes, of how conflicting approaches to grief can be reconciled.

We begin with the Girl (played by Charlotte Croft), after the death of her mother, leaving her home by the sea and moving to London to live with her Grandmother (Liz Crowther), packing only a few mementos of her mother and an old paper kite. This chunk of exposition and story is told with wonderful swiftness and spareness. All the elements available are utilised: scenography, sound, object work, physicality and looks between the characters. This includes, right from the start, the work of the other two performers, Linden Walcott-Burton and Nicola Blackwell, who are credited as ‘The Wind’, and are, beyond that (and a certain amount of nimble scene-changing) the anima, the breath of the piece, fluttering clothing, setting things moving. They whisk away things that need to be lost and deliver them precisely when and where they need to be found. It’s a delicious conceit that is very puppetry-centred but also sits perfectly at the heart of the more movement-based languages of the show.

Sometimes the movement/visual sequences are right on point: as the two arrive at their now shared home, there’s a moment where Grandmother acknowledges adjusting the table in her kitchen to seat two – an instant that somehow says everything about the changes in her space, her life. At other times they’re a little overworked, and heavy-handed: there’s a conflict over sitting down to dinner that had me wondering if the Girl was meant to be fifteen or five, and in either case didn’t really ring true – it felt more like an elegant exercise than essential storytelling.

Design (by Rachael Canning, who also directs) is a brilliantly effective mix of real-world objects (a fridge, a wheelie bin, a bed, a window frame) backed by colour-changing neon strips that allow it all to be more abstract in an instant, becoming trains and rooftops and city exteriors. Similarly, ornaments and books can become landscapes and scenery. Sound and music by Isobel Waller-Bridge is at its best when neatly accentuating action, supporting storytelling, and rather less so when slightly-too-frequently seeming to insistently tell us what to feel in scenes (mostly a rather non-specific maudlin bittersweetness).

The show culminates in a climactic magic-realist sequence as the girl is whisked across night-time London by her kite, with Grandmother soon in hot pursuit. The Wind, and the kite, help the Girl soar through her new environment, shedding the relics of her mother as she goes. These all fall neatly into the path of Grandmother who finally lets them in, admitting her own memories. It’s possibly over-tidy as a narrative device but it’s undeniably touching in performance.

And here too, the show is best when the urgent necessities of narrative propulsion lead the visual work, and less so when the other way around: the figurative puppetry (as so often when it appears in theatre) is absolutely paradigmatic of this. So, we have miniature tabletop figures of Girl and Grandmother, soaring and shivering amongst and above pop-up-book London. It’s a great vision, and it’s all elegantly done. But the flying Girl puppet has no weight, and so no struggle, none of the conflicting emotions that her human counterpart displays, and is not properly at the mercy of her kite. The Grandmother puppet is shaken (a right puppet no-no) rather than trembling, when cold. It means they don’t have full puppet agency: they become illustrative, like the picture-book itself, moments of visual pleasure rather than emotional heft. And this is how I feel, in the end, about the show itself: it is well-made, well-structured, well-intentioned; subtle and slick, beautifully performed; but crucially lacking some of that final connection to truthful human depth that would make it genuinely moving.