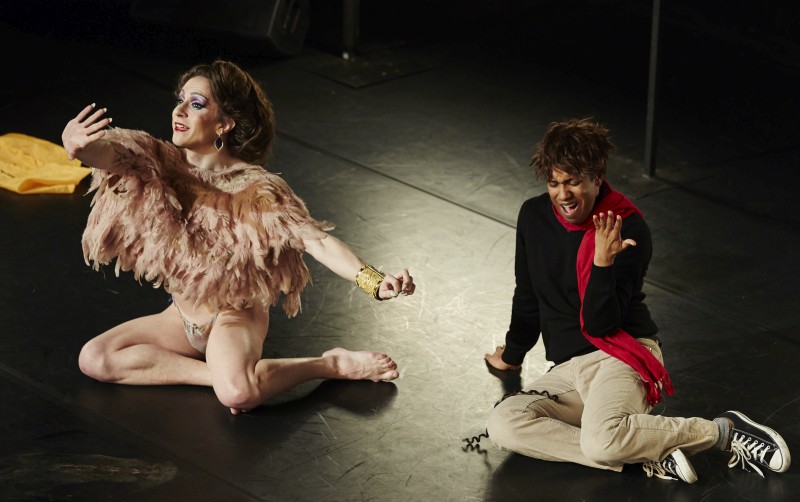 Closely linked to the festival’s Storm theme, this highly experimental production (full title: (M)imosa / Twenty Looks or Paris is Burning) highlights the value in turmoil, whipping up a mind-blowing hurricane of images and ideas. Presented as part of a trilogy running throughout Bristol’s In Between Time festival, (M)imosa is a complex and provocative international choreographic collaboration between New York-based Trajal Harrell, Paris-based Francois Chaignaud and Cecilia Bengolea, and Marlene Freitas from Cape Verdean. The piece is based on the documentary film Paris is Burning, which explores New York’s voguing scene of the 1960s, and imagines a clash between the stylised black LGBT performers of the Harlem Vogue Balls and the Judson Church’s post-modern dancers, who concentrated instead on a lack of spectacle. These two contrasting styles are explored through a hugely varied, incredibly dextrous and often highly surreal mix of dance forms, monologues, drag acts, songs and audience interaction. Thrown in to this riotous mix too is an exploration of the performer’s own identities and their quest to become someone else.

At its core, the piece seeks loosely to explore the character Mimosa: a transient performer of varying genders and talents who embodies this clash. Like the character herself, this exploration takes various forms and (as in Martin Crimp’s Attempts on Her Life) the more we seek to define this central character, the harder she becomes to pin down; Mimosa is presented as being a ballet dancer, a singer, an onlooker, and an outrageous drag queen. Most importantly though, she is a device to explore the transgression of boundaries, as each performer brings their own unique perspective to her that also speaks much of their own skills and talents; indeed the most outrageously abstract and captivating sequence for me is summed up thus: Cecilia Bengolea enters the stage in a nude body suit that somehow encompasses amazingly high heels that look like they have become part of her legs. Bending backwards, she clutches her ankles with stunning flexibility and moves around the stage crab-like, fake phallus pointing skywards, then eventually breaks into discordant song!

The pace of the piece is well structured, yet very challenging at times. In the opening sequence a solo performer bares her breasts and dances violently to what feels like a never-ending pounding track, tearing at her hair and seemingly trapped by the music. The highly skilled movement, physical stamina and dexterous facial expressions are breathtaking, but this sequence is an indicator of the lengthy piece’s demands on an audience to stick with it through its unconventional peaks and troughs. Moments of frenetic action with performers sweating and labouring, dancing until it looks physically painful to continue, are followed by lulls with little occurring other than the stage being slowly cleared and casual conversations occurring between the cast. This structure made the show feel almost durational in some aspects and I found myself enjoying it immensely whilst simultaneously wondering when it would end. This device seems purposeful; the technique keeps an audience invested by showing the long, messy job of defining identity. It also clearly highlights the imagined melding of the two diametrically opposed performance styles.

In (M)imosa’s liminal and unstable world, when we are suddenly grounded again in gritty reality, the juxtaposition is stunning. When the performers approach the audience (as they do often in this active, experiential, piece, coming off stage and into the audience space when they have finished performing their specific section) they are all faded glamour and muttered asides. Along with the visible detritus of props strewn around the stage, the make-up smears, bedraggled clothing, and distinctive smell of greasepaint reminds us that these are ‘actors acting’ and for a distinct purpose. There are moments too of real beauty: skilled balletic sequences, heartfelt monologues, twisted songs, and a hilarious Kate Bush parody which initiates a particularly enthusiastic audience response. The piece shows how meaningful performance can be created in the midst of chaos and mixes contrasting ideologies with verve, leaving plenty to think about post performance.