Relic, as the gifted Greek theatre-maker Euripides Laskaridis explains, ‘is a word that comes from the Latin “relinquere,” which means “whatever is left behind.” It’s something that has survived the past – be it a memory, a story, an object, a language or a being.’

The above definition might be useful in beginning to grasp the motives and philosophy behind his off-beat, outrageously engaging solo Relic. A presentation of this year’s Mime Festival, Laskaridis’ singular show was created under the auspices of his company Osmosis – a word which, beyond the scientific meaning of membrane penetration, also means the process of gradual or unconscious assimilation of ideas and knowledge (from the Greek ōsmos – ‘a push’). But audience members can also relinquish intellectual concerns and simply have a rollicking good time experiencing Relic as an expression of existence balanced on the border between the peculiarly poignant and the utterly bizarre.

I saw Relic in Barcelona a couple of years ago where it was included in a jam-packed programme of short works chosen for the annual, dance-based European performance platform Aerowaves. The show, and Laskaridis’ performance (which in effect is the show), was a highlight especially because it was so riskily playful and far from the norm.

On the Osmosis website Relic is described as happening in ‘a makeshift room, decorated in a haphazard DIY fashion’ where ‘a performer puts his notably awkwardly-shaped body under the magnifying glass.’ The room is, in essence, the stage but such a public arena is also the haven for someone whose state of being could be considered capricious, unquestionably camp, and even precarious. His/her (for there are forces at work here operating outside the standard gender binary) bulbous appearance might at first seem unsettling yet is harmlessly grotesque and, like his/her behaviour, oddly comic too.

Again, to quote from the website, during the performance ‘magic comes from the mundane, while references to cabaret, vaudeville and slapstick abound’. Greek artist Euripides Laskaridis is, it says, ‘preoccupied by ideas about transformation and ridicule’. With our gaze fixed firmly on unexpected aspects of the human condition, we explore everyday life – the little details, the collective subconscious, the imaginary and the absurd: ‘By testing the limits of our acceptance of the incongruous and unfamiliar, performer and audience alike will experience a moment of transcendence.’ 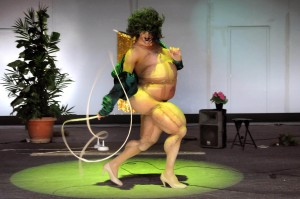 Others share my high regard for Relic. As Laskaridis estimates, in the space of just eighteen months or so it has been presented over forty times already in nearly twenty festivals in at least ten different countries.

Laskaradis, whom I met properly in Athens this past autumn, is a performer who uses whatever it takes to ‘say’ what he needs to say creatively. In other words, don’t pigeonhole him. Apart from his own projects for Osmosis he’s worked with Robert Wilson and, even more recently, was the recipient of a Pina Bausch Fellowship that enabled him to travel to Auckland and Santiago to observe in-depth the working process of the choreographer-director Lemi Ponifasio.

While Laskaridis claims to have had a relative lack of acceptance from the more conventional (ie text-based) branches of contemporary theatre, particularly in Greece, he has acquired an increasingly rewarding affinity with dance. ‘Dance doesn’t use words and thus understands many languages. It is everywhere in the world where the performing arts are trying to figure out new genres to categorise us. It’s an open artform – an art without borders. Artists with peculiar artistic voices like mine – that can’t be easily categorised – find shelter in the dance world. It’s a world that let this strange person in.’ And, he adds, ‘After Pina Bausch opened the can of worms with her form of tanztheater we’re all very lucky to be free of labels.’

Since founding Osmosis in 2009 Laskaridis has made work to be performed indoors and out, as well as ensemble pieces and solo shows. Where, I wondered, does Relic fit in terms of his overall development, especially as an artist based in Greece? ‘While Osmosis was formed at the very beginning of the Greek crisis, Relic was created during the heart of it. It’s no coincidence that it’s a rather personal, handmade solo piece for smaller spaces. It comes from the moment I realised the company would have to improvise to keep existing.’

Although we don’t spend a lot of time talking about the state of the world and the artist’s role in society, Laskaridis has, naturally, considered these relevant subjects. ‘I don’t consider myself to be an activist through my art,’ he says, ‘and am truly sceptical as to how much one should try to be “political” through a single performance. I do have an opinion for sure, and not a quiet one, but being an uncategorised artist already feels political enough. To me it doesn’t seem that art has any other mission than to help us contemplate our fragile existence.’

One of the ironies of Relic is, perhaps, how boldly and vividly it induces that contemplation. This is, as Laskaridis avows, in part the result of a creation process that invited in-put and exchange. ‘It’s a one-man-show but at the same time the work of a collective. If it weren’t for a loose group of collaborators it wouldn’t have happened. Even though there was no budget, and no clear plan of where or when this show would be ever presented, several people supported my endeavours by offering their time, their artistry, their golden advice and their feedback.’ He mentions Tatiana Bre, an associate director and friend who ‘spent endless hours watching me improvise and helping me clear out the abundance of ideas’; costume designer Angelos Mendis, who ‘gave me the key to the direction the work should go’; and Dimitris Papaioannou, one of the best-known Greek choreographer-directors and Laskaridis’ mentor who ‘gave his full support in every way possible to make sure I cleared the fog and concentrated on the essence. I feel blessed to have a nucleus of people around me who are moved down an unusual path by the sheer enthusiasm of artistic exploration’. 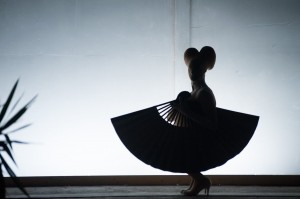 And yet, for all the artistic investment from others, Relic is at once a highly a subjective performance but also, for all its zaniness, one that carries a strong potential for universal identification. ‘It’s a personal piece,’ Laskaradis agrees, ‘and at the same time an open poem to all creatures past and present. Through this peculiar onstage existence it speaks about this place hidden at the back of our mind which we have all dreamed of but can’t put into words.’

Embracing the multiplicity of angles that can arise from live performance, Laskaridis is able to articulate both what it’s like to experience Relic and what it means for him to be in it. ‘It’s not an easy show even though it’s light and quick, so that the time passes by very quickly for the audience. This is the art behind it, I guess – a lot of mind and body work, transferring, remounting and performing the piece every time in a different theatre. The public sees none of this effort – they just have the pleasure of the journey within the 40 or so minutes the show unravels before their eyes.’

As a solo Relic is, as Laskaridis sums up: ‘A piece that needs you to bring your 100% of your being every time you perform it. I like to talk to the audience after the show – about what they saw and what story they “read.” Each audience member has a unique thread untangled in their mind each time. This feedback is my ammunition for the next performance – food for thought for next time I’m onstage.’

Suffice to say that when you meet him and talk about his work it’s plain that Laskaridis loves what he’s doing. It therefore comes as no surprise when he says, ‘I’m thrilled to perform Relic every single time.’

Euripides Laskaridis/Osmosis: Relic is at Barbican, The Pit 31 January – 4 February 2017 as part of the London International Mime Festival.