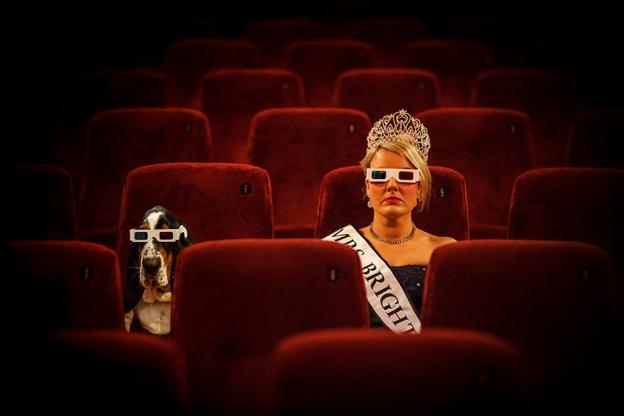 In which Victoria Melody, a 35 year-old performance artist with a winning smile and an interest in anthropology, and her trusty dog Major Tom, a six year-old Basset hound with lovely long ears and an interest in Schmakos dog treats, pursue parallel paths of gruelling competition in their endeavours to become beauty queen / champion show dog, respectively.

And all in the name of art! What some might call intensive research for a theatre show, others might view as a life-as-art decision to really live it in order to know it, before you can even start to tell the story. And here onstage, telling that story in their very different ways, are Victoria Melody and Major Tom.

There’s a deceptively simple, beautifully designed set: dark stage, white dog cushion and bowl (stage left), white semi-opaque folding Chinese screen for the costume changes (stage right), and upstage a large screen, with underneath it a set of rather nice letter blocks spelling out Major Tom’s name in lights. Victoria mostly talks (well, you’d be surprised if I said the dog did) whilst Major mostly snoozes, and the anecdotes are supplemented by short bursts of video that take us, directly and without the need of any additional ironic framing, straight into the world of dog shows and beauty pageants – plus we get a number of quick-change costume catwalks (dress wear, swim wear, evening wear) and a little bit of pimping and preening of Major’s basset assets. The lighting design is elegantly crisp and simple, the sound and video perfectly supportive of the live performance. Everything that happens on stage is carefully choreographed, and executed with panache and precision – there is evidence of the influence of Victoria Melody’s mentor, Ursula Martinez, and that is only for the good.

Major Tom is the one wild card, free as he is to do as he will. He looks, says Victoria, like an old Tory, and that is exactly how it is – he dozes through the rhetoric like a House of Lords veteran, occasionally looking up and yawning or shaking those long ears, as if in agreement or approbation. Now and again there’s some noisy slurping from his water bowl, and the occasional stroll round the space. As Pina Bausch and Alain Patel have found, having a dog on stage adds a wonderful extra dimension to performance work – dogs are just so perfectly present.

Victoria Melody is an engaging performer, and her show is a clever weaving of the parallel stories of dog shows and beauty pageants. It all starts with Major Tom. We hear the history of his provenance and pedigree, and we learn that Victoria and her husband Mitch agreed that they’d first buy a plant, and if that lived buy a dog, and if that lived have a baby. Victoria (whose previous work includes an intensive and long-term engagement with Northern pigeon-fanciers) decides that an investigation of the world of dog shows will be her next artistic venture, so Major finds himself propelled into the limelight. Unfortunately, although he does well as an amateur, once he turns pro he keeps coming last, so needs a fair bit of training and grooming. Later his ‘mummy’ decides that it is only fair that she puts herself through a similar ordeal, and thus starts her journey on the beauty trail, with her eventually winning the title Mrs Brighton and being entered for the coveted crown of Mrs England (no, really!). Meanwhile, back in the dog world Major Tom’s success has risen to dizzy heights and he finds himself being entered for Crufts…

The story of how they both get sucked into the world of competition, and eventually ease out back into normal life, is a ‘gentle ride’ (as one fellow theatre-maker described it after the show), but the gentleness is deceptive. Had this been presented as a polemical rant against the Beauty Myth and the ways in which women’s bodies are judged, we’d have switched off in the first five minutes. Instead, Victoria Melody seduces us into her world with laughter. We guffaw at the absurdities, and we share her ambivalence towards it all, questioning the ethos whilst still loving it, as she does. I mean, who wouldn’t want to have lovely legs, shown off to their best advantage in a pair of five-inch-heeled sparkly silver shoes?

There are hard-hitting undercurrents – but they hit us through the holes forged with laughter. There are many cutting moments of awareness of the convoluted and simultaneous demands of so many different cultural attitudes to beauty – human and canine. We feel for Major when his ears and ribs and teeth and legs are commented upon. We are with Victoria as she battles with her weight, takes on a personal trainer, forces herself into skin-tight frocks, gets waxed and tanned, learns to walk in the highest of heels. I’m reminded of Germaine Greer’s The Female Eunuch, and its discussion of women taking on ‘femininity’ as a drag queen does. Victoria’s stance is of someone taking on a feminine identity that is other than her own, although one she enjoys indulging in and playing with, almost treating herself as a real live Barbie Doll.

No doors are left unopened – there’s a fantastic moment when she recounts an incident in a changing-room, as she realises that all her beauty contestant companions are staring aghast at ‘her hairy bush’. At other moments, we hear of criticism of her thin, fine hair (she gets extensions) and her ‘upside-down’ mouth, which she is told will turn further downwards when she ages unless she gets plastic surgery now (she doesn’t do it, which causes the female members of the audience to roar in approval).

At the end of it all, the competitions won or lost, and the making of the theatre show underway, we learn that Victoria’s husband Mitch asks, ‘Can we go back to normal now?’

Major Tom, created and performed by Victoria Melody, commissioned and produced by Farnham Maltings, is a major achievement – bright and breezy sexual politics without the polemic, entertaining and thought provoking. It’s beautifully designed, carefully choreographed, and performed with panache. A grand success!