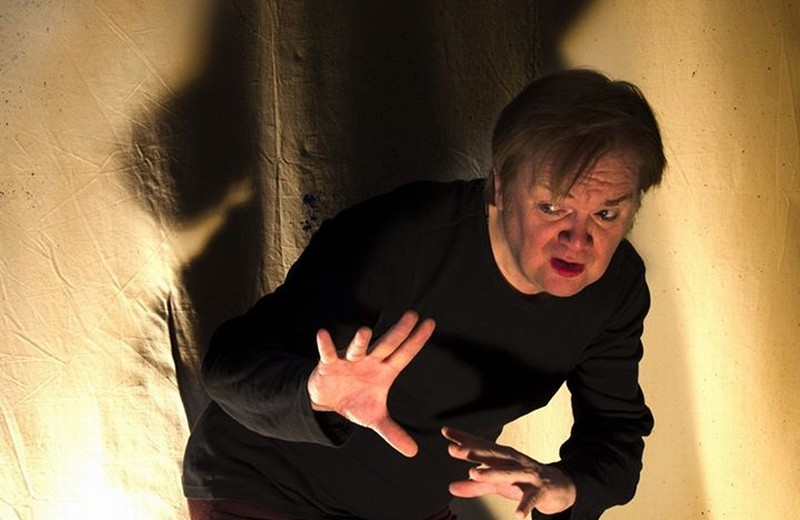 In this one-man show, Garry Roost appears as Francis Bacon sharing tales of his life, loves and art works with the audience. I found him quite convincing as the English painter, a portrayal he inhabits with a real sense of empathy, and the script certainly delivers many insights into Bacon’s life. This particular presentation, however, was quite an effort to absorb due to aspects of the staging.With its semi-circular rows of steep-raked wooden seats and shelving, the Demonstration Hall is a charming and intimate space, but its bare walls turn it into something of an echo chamber. This means that the show’s often fast-flowing stream of words was too easily transformed into a babble, which was especially unfortunate given that Roost’s sonorous voice is his primary and most effective means of expression. In the quieter, stiller moments we get a glimpse of what the show could be like, making me think that a black-curtained studio would have provided a more appropriate venue.

The only items of set are three tall screens, used for entrances and exits into imagined spaces. They each bear the same design of three coloured circles, which, within the peeling paintwork and distressed/authentic aesthetic of the room, look like display screens for a product launch at Earl’s Court. As far as I am aware, they also have no clear relation to Francis Bacon’s artwork, and I wondered whether projected images might have helped to land and illustrate subjects of the spoken narrative.

The whole piece is also performed in a single lighting state, without any soundtrack or what could be described as a costume. This places even more demand on the vocal delivery to convey the story, making it at times seem like we were witnessing a rehearsal, delivered very directly to each of us.

Given all these aspects, I found it difficult to engage with the narrative – but I imagine some fairly basic adjustments might make it an effective and rewarding show. The performer made a powerful effort in the face of these challenges. After the show, he was selling CDs of the piece, and it left me thinking that audio drama felt like the underlying format of the production’s delivery of the text.