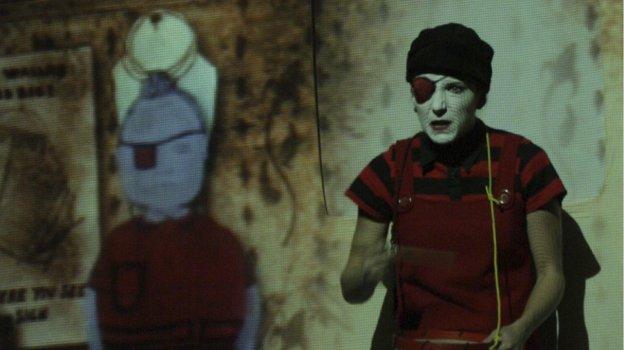 So here we are, in the beautiful big city where there’s ‘milk and honey in every Frigidaire, and muzak playing in the air’. But wait: every city has its dark side, and there are places that the tourist buses don’t take you to. I mean, who goes to London to see Tottenham, or Peckham, or Croydon?

The onstage projected scenery switches from an attractive blue-and-silver skyline to an earthy expressionist mix of browns and reds with jagged black outlines, the screen-painting meanwhile depicting a run-down apartment block, a crazy jigsaw of walls and elevator shafts and rubbish chutes. Welcome to Bayou Mansions on Red Herring Street, where it’s hard, so hard, to keep the wolf from the door.

Three little windows open to reveal three gossiping ladies in old gold dressing gowns and turbans: our guides in the terrible tale to come. Bayou Mansions, we learn, is a place rife with cockroaches (we see them walking across the screen and doffing their hats), where the rooms are too small to swing a rat. We are introduced to some of its inhabitants: a 21-year-old granny, the lonely caretaker, his nemesis Wayne the Racist, and an enormous rat-pack of renegade children who know that the city’s parks are not for the likes of them, especially since the weeping woman junky got replaced by a water feature. Pan out to the rest of Red Herring Street, a tangle of stripjoints and takeaway restaurants offering ‘pan-fried pussy cat’, and we meet a junkshop owner who is touting glitter wigs, cuddly toys and Torvil and Dean VHS videotapes (and this lady’s feisty daughter Zelda, a left-wing activist and local gangleader).

Red Herring Street may be down in the dumps, but there is hope! Enter Agnes Eaves and her daughter, Little Evie, who are different, cleaner, and on a worthy mission to save Bayou Mansion’s children with ‘love, encouragement, and a bit of collage’. A story of riots, kidnap, and political subterfuge ensues, and of course there is no happy ending, just endless misery forever, because there’s no escape, and ‘if you are born in the Bayou, you die in the Bayou’.

It is all played out by our three live performers (writer/storyteller Suzanne Andrade, physical theatre performer Esme Appleton, and pianist/composer Lillian Henley) augmented by the gorgeous animated characters, graphics, and projected scenery created by the fourth member of the company, Paul Barritt. Taking techniques explored in their first show, Between the Devil and the Deep Blue Sea, the company push the possibilities of live and screen interaction on mightily – not since Forkbeard Fantasy’s debut has there been a company so adept at integrating live and screen action, and so interested in exploring the medium’s possibilities.

The Animals and Children Took to the Streets, only the second show by 1927, has toured extensively since its long development phase and premiere last year at Battersea Arts Centre, over which time it’s developed a delicious pace and dynamism. Yet there is something more adding an edge, and that is something the company couldn’t have predicted or factored in: the 2011 English riots. Suddenly, this satirical story of rioting children, with its ironic reflections on ‘art in the community’ versus wholesale sedation via ‘shadow nannies’ and the ‘granny’s gum drops’ that reduce them to blank-eyed couch potatoes seems suddenly horribly, terribly pertinent and politically insightful.

It’s visually beautiful, with animation that is cleverly integrated with the live action and technically honed to near-perfection, has marvellous live music, and a wonderfully witty script that is a shining example of contemporary satire. A lovely, lovely show. I saw more than 60 shows at this year’s Edinburgh Fringe, and I went back to see this previously viewed piece to check it was still as good as ever.

It was better, dear reader, even better! Editor’s choice for the best stage show at the Edinburgh Festival Fringe 2011…