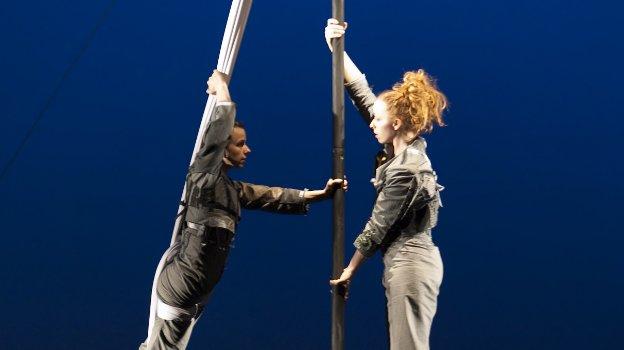 Billing itself as ‘three short stories narrated through contemporary circus and aerial dance’ Uncharted Waters takes a general theme of the nautical and seafaring. There are (as it says on the can) three pieces presented, these linked, or interspersed perhaps a better way to put it, by live song of a sea shanty nature sung by Dave Boyd, who accompanies himself with simple and effective percussion.

The first piece, Spokes, uses ropes and silks to explore everything that can be explored around the notion of masts and rigging. It’s all efficient enough aerial work, but to an old lag like me there is nothing here that hasn’t been done before with ropes and silks, and there are other shows that I’ve seen in the past that have used ropes to explore nautical stories a lot more convincingly. I am also not particularly charmed by the performance presence of the two women aerialists (Lucy Deacon and Jennifer Patterson). Or at least, not as manifested in this piece. I note that Grid Iron’s director Ben Harrison and composer David Paul Jones are part of the creative team, and although the soundscape is good, it is hard to see where Ben Harrison’s talents for ‘dramatic development’ have been put to use here…

The second piece in the trilogy, Youkali, is better. Moritz Linkmann’s Chinese Pole work is of a high standard, and the piece – a kind of sailor goes to shore and gets into drag vignette; perhaps a reflection on the masculine/feminine binary divide of seaman and cabaret diva within one person? – swings along nicely. I love the contrast between Moritz Linkmann’s muscled, overtly masculine body and the slinky lady-dress he dons, with pristine white y-fronts underneath exposed as he turns upside down. But surely the Kurt Weill/ Marlene Dietrich torch-song classic ‘Lili Marlene’ has been done to death? Was there a reason why it had to be this tune, or could another, less hackneyed, song have been used? Perhaps the cliché was the point, but I do feel I’ve witnessed an awful lot of drag versions of Marlene. Still, this section shone out in an otherwise mediocre programme of work.

The second piece is followed by a long interval while the space is re-jigged and rigged for the third section, prompting thoughts of how ‘big top’ traditional circus so often understands the form better than the contemporary makers: there really should and could be a way to move from one piece to another without this big long gap, which breaks the momentum. 1,2,3 here we go, a corde lisse solo by Jennifer Paterson, is OK, demonstrating able skills, but not really thrilling enough to warrant that long wait.

My favourite performer is actually the musician, Dave Boyd, whose robust tunes give an earthy balance to all that airiness. I feel a lot more needs to be done dramaturgically to make these three pieces hold together as one complete show; and I’m not convinced that the exploration of the nautical theme witnessed here is offering anything the world hasn’t seen very many times before.