One of the world’s most distinguished creators of puppet theatre, Frank Soehnle, and his productions have added to the lustre surrounding this branch of the performing arts in the twenty-first century. His aesthetic is unique, always the hallmark of a true artist; his techniques of craftsmanship and staging, his company’s performances in terms of their poetry and precision of movement and manipulation are superb; his choices of a dramaturgy which integrates sculpture with movement, music with drama, the creepy with the comic, the refined with the coarse, are all the product of an original vision.

The company’s base, Tübingen, is a town some 30 kilometres from Stuttgart, where he was born. Co-founder of Figuren Theater Tübingen, is Karin Ersching – performer, puppeteer, director, lighting designer and tour manager. She worked in special education from 1987-93, and has independently given guest performances and workshops in many different countries. She also makes puppets and teaches manipulation to students. Soehnle also gives workshops, as he is scheduled to do in London on Saturday 6 February 2016 (a ‘weekend lab’ called Things on Strings), and he teaches in several schools and festivals of puppetry.

This year the company is back in the London International Mime Festival, where it has been three times before, with Flamingo Bar, Nachgesichter or Night Visions, salto.lamento (one of my all-time favourite theatre productions) and now Wunderkammer, a chamber of wonders or, as the programme has it, a Cabinet of Curiosities. 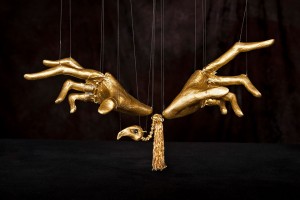 The Wunderkammer itself is like a strange museum where a number of fantastic objects, artistic, scientific and natural, are operated by stringed controls and given life by three expert marionettists. These puppeteers have come together in a common desire to pay homage to the doyen of the European marionette, the late Albrecht Roser. Each of the three was a student and friend of Roser, each is director of her/his own company: Frank Soehnle himself, Alice Therese Gottschalk of FAB Theater, and Raphael Mürle of Figurentheater Pforzheim. Each studied and/or taught in the Hochschule für Musik und darstellende Kunst, the Higher School of Music and the Performing Arts in Stuttgart, in the puppetry department founded by Albrecht Roser in 1983. Roser was introduced to Soehnle when he was only 15, and acknowledges him as his inspiration and generous mentor until his death in 2011.

Another aim of the creative team was and is a determination not just to keep the employment of the stringed puppet alive but to demonstrate that it can be as contemporary and experimental as any other type. The Tübingen company has been successfully accomplishing that for some years.

Soehnle is fundamentally a modernist, an admirer of the Dadaists and the Surrealists. His figures, always made by him, are like no others. They are often insubstantial, ghostly, sometimes made of ephemeral materials.They are ‘genderless hybrids, embodying transience and death’, although the characters can be as comic as they are sinister – defined, Soehnle says, as much by their movements as by their role. With string puppets the movement is dictated by the size and structure of the marionette, which may be tiny or gigantic. At some stage of their animated life they are inclined to become independent of their maker, seeming to be manipulating the puppeteer, not the other way round. The performer needs to find the figure’s ‘centre’, on which he or she goes to work to achieve the professional precision so important to puppet performance, within the choreography of the whole.

The shows are nearer to dance than drama, although they may be based on a literary text – by Kafka, Chekhov or Čapek for example. The literary story serves as the structure of the show but Soehnle captures the language in atmospheric stage pictures rather than speech. There are exceptions, for instance in one production, Gabriel García Marquez’ story of The Very Old Man With Enormous Wings, presented by the Tübingen company as With Enormous Wings, a narrator was pivotal to the action. (For the international tour each actor chosen to play the part was a native speaker of the country where it was shown.) There is no permanent group of players: a special team is chosen for each show, sometimes four or five, sometimes only one. Soehnle calls himself the ‘soul’ of the work, where sculpture and music are essential elements, but his own fantastic imagination always at its core. 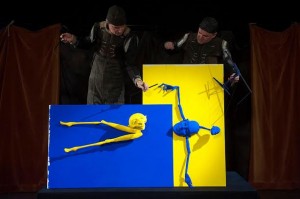 In the making of Wunderkammer the whole company played a part. The concept was inspired and framed by the music of Bradley Kemp, a jazz musician brought over from New York, who supplemented the compositions of Michael Wollny and Tamar Halperin. Within this framework the creation of the show was an open collaborative process, developed by a company of artists incomparably rich in talent and united in their creative aim. It has resulted in a beautiful and intriguing series of scenes in which stringed artefacts are animated in various modes and moods, both serious and comedic.

Soehnle seems to be at the height of his powers, and the company’s future is full of promise, with five or six projects ‘in the oven’ in various stages of realisation, students to be taught, tours to be undertaken. Their immediate activity concerns the revival of Nachtgesichter, already up and running in the prestigious Komische Oper, the Comic Opera House of Berlin, where the Intendant or Artistic Director is the Australian Barrie Kosky, a friend and admirer of the Tübingen company. Soehnle made the puppets for Kosky’s 2012 production of Orfeo. Kosky’s recent version of Mozart’s Magic Flute, created in collaboration with the 1927 theatre company, and presented across Europe, and to great acclaim at the Edinburgh International Festival 2015.

In 2009 a fine book was produced by Wilfried Nold, a specialist in puppet books based in Frankfurt, about the activities of the Tübingen company. Beautifully produced and with illustrations on every page, it is simply called Figuren Theater Tübingen, Creationen 1991-2009 and would be a fine addition to the library of every enthusiast of visual theatre.

Few companies have been chosen for the London International Mime Festival four times: it is proof of the high regard for Frank Soehnle’s productions held by the co-directors of the festival Joseph Seelig and Helen Lannaghan, who are as excited to present Wunderkammer as we are to see it.