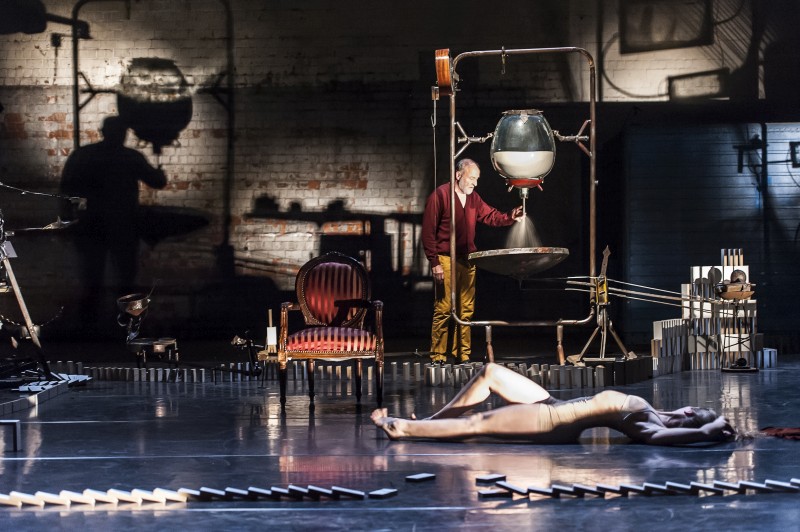 The slim blocks fall, tumble, and set off the Heath Robinson-like contraptions. A large bulbous glass jar spills grains of sand, like an egg timer, time literally running out. The set, within its human constructs, has a life and character of its own.

Expiry Date, a union of circus and contemporary dance theatre, reflects the old man’s final hour as he grasps, grapples, and glowers with and through his scattered memories. The older man, Joseph (played by Thomas Hoeltzel) is joined by a younger man (Jef Stevens), who plays a remembered version of the same character, plus two young women: Laura Laboureur, who plays Joseph’s long-lost and much-loved wife; and Swedish-born circus-theatre artist Anna Nilsson,who is also the co-director, and founder of BabaFish. She plays a kind of wandering spirit: perhaps the ‘essence’ of the piece, a mixture of the characters’ wrangling emotions, or the mischievous body or illness that just will not behave itself? Ultimately, she is the spirit of death itself.

As the dominos fall, balls run down tracks, and pendulums swing, we notice Laboureur, inside one of the large contraptions to the rear of the stage, resplendent in a beautiful wedding dress, and singing like a caged bird. Meanwhile, Nilsson does a sinewy, contorted dance, seemingly naked (in fact, in flesh-coloured underwear), while Joseph watches, in his burgundy cardigan, hands in pockets. Her hair falls over her face, turning her into something other than human, as she scampers on all-fours, her body back-to-front. She twists and turns across the floor, her limbs making extraordinary shapes.

Next, Joseph watches as his younger self and his wife play out the struggles of love and marriage in an intense duet of pushing, pulling and wrestling. This builds into shouting (in a babel of languages), but is then resolved in a beautiful sinuous duet. Later in the piece, I enjoy the dynamic of a lovely arm-dance section, where all four performers are ‘stacked’ head and shoulders above each other, on and above the chair.

Throughout, there’s ample beautiful music, including twanging sci-fi sounds as Nilsson contorts herself across the floor; and an amusing and surreal live rendition of the Habanera from Carmen performed by Laboureur (‘L’amour est un oiseau rebelle / Love is a rebellious bird’), plus some virtuosic juggling and white ball manipulation from Jef Stevens, which is both poignant and lyrical.

The show is created by Nilsson and co-director Sara Lemaire, and co-devised by the cast. The extraordinary set was created in collaboration with Jan Nilsson, Anna’s engineer father.

Choreography is by Hun-Mok Jung, who is known in the UK through her performance last year with the company Peeping Tom, in 32 Rue Vandenbranden.

There are moments of illumination and love. It’s these small, ephemeral flashes of ecstasy and beauty that make us alive, says Nilsson in her director’s notes. Do we ever at the time acknowledge the power of a moment destined to become a mere memory?

Expiry Date is very well crafted and constructed, yet somehow, never quite takes off for me. I watch, yet never quite enter into it. To be admired rather than loved.