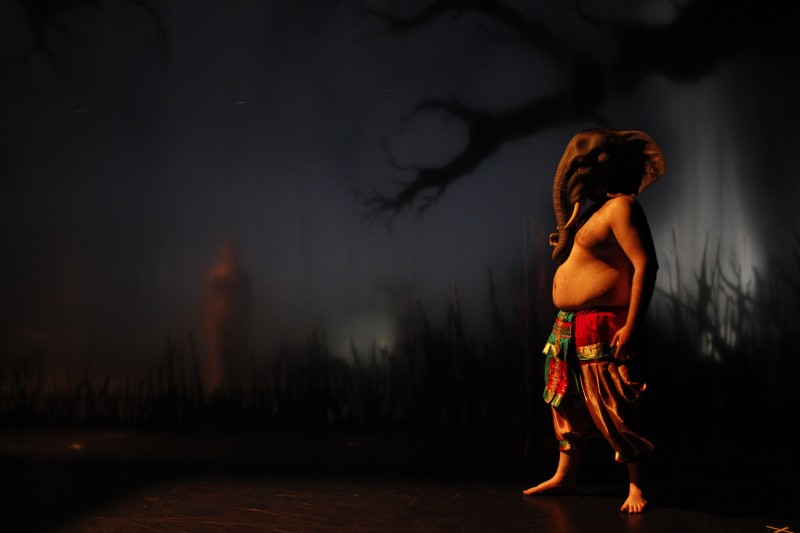 If you are going to represent a sacred religious figure-head, re-enact aspects of the most contested historical episode of the twentieth century, and interrogate changing attitudes towards disabled people, more specifically actors who ‘nominate themselves as being perceived to have a disability’, then Ganesh Versus The Third Reich must be one of the bravest and most honourable examples of how to go about it. Back to Back Theatre from Australia have only four performances to make their mark at the Edinburgh International Festival and I was lucky enough to witness the second one.

We see Lord Ganesh’s quest to prevent Lord Shiva from wreaking havoc on mankind by returning the Swastika symbol, appropriated and corrupted by the Nazis, to its original home within the lexicon of Sanskrit and Indian mythology.  We begin with an arresting semi-comic opening set within a pop up picture book space: a shadow theatre and live action enactment of an exchange between Lord Shiva, Parvati, Ganesh and Lord Vishnu. Then we cut to the rehearsal room of the production and its four actors: ‘Brian’ (Brian Tilley), ‘Simon’ (Simon Laherty), ‘Mark’ (Mark Deans), and ‘Scott’ (Scott Price), led by what may be understood as their director, facilitator and carer, ‘David’ (David Woods), who, in this role at least, appears never to identify himself as having any intellectual challenges and in this instance is driven by a particularly and singularly unshakeable vision.   We are in the fantastic world of meta-theatre here in which the ‘real’ rehearsal process is inflected with the moral and ethical dilemmas represented within the constructed play, the embodied mythology. At one point David throws any doubt about the capability of the actors to create such complex work back at an imaginary audience. He goes further and dares to accuse the hypothetical audience of coming to watch ‘freak porn.’ The conjecture is harmless and hilarious but potentially real and thus he illustrates a point to both the cast and the audience daunted by the scale of the ethics confronted in this piece.

Brian has written a play and of course he has the main part as Ganesh and gets to wear the elephant head. He plays the part in a tone of speech that is dramatic and sonorous.  Simon, very slight and elegant, is to ‘do the Jew stuff’ and so he is in stripy pyjama bottoms.  He operates as a peacemaker between the writer and one of the actors who initially appears to be ambivalent about the project, the mysterious and self-absorbed Mark. Scott is to play a German soldier, dressed in a woollen uniform with elongated and stretchy feet reminiscent of a fairy tale character. At various points the prospect is aired that one of them may be ‘promoted’ to take on the role of Hitler.

As the Hindu god journeys to Berlin, through the woods of Germanic folklore and notoriously efficient trains of Switzerland, we experience the uncomfortable conflation of actors with disabilities performing both as the protagonists and targets of Hitler’s project. For Simon this means embodying the subject of the experiments of Dr Mengele, also played by David Woods with a volatile combination of charm and menace. What ensues explores the dangerously fine line between strong leadership and malicious control as the director augments his vision regardless of the feelings of his cast. David, performing the role of Director, has an amazing capacity for patience: ‘There’s no I in team,’ he chants, dancing an exquisite cheerleader routine whilst his shambolic team drift about the stage. Only Scott seems willing to challenge him, stubbornly refusing to roll over and die correctly ‘as if’ shot in the back of the head. Here the filmed documents of Hitler’s murderous regime may come to mind, but David’s vicious persecution of Scott is playfully disrupted by echoes of chase sequences from Chaplin’s The Great Dictator.

The production alternates between epic journey and rehearsal room realities as cleverly executed scene changes are created by the cast swishing five ceiling to floor transparent curtains back and forth. With clever lighting these create a multi-layered backdrop reminiscent of graphic novels and silhouetted children’s illustrated storybooks such as The Ramayana.  The production values are sophisticated and very effective, including the subtle use of layered vocal sound that allows the actors to augment their voices and personae with terrific rumbles and screams.

Bruce Gladwin has facilitated this amazingly skilful team of performers and artists to create a tight and beautifully structured latticework of scenes that dodge between mundane rehearsal, mythology, and play whilst unpacking the complexity of the relationships between the five players and of broader society. This is a kind of theatre that gives permission to laugh in the face of taboo, to question the limits of reality and fabrication, and to revel in the potential and pitfalls of creative representation.

At the haunting ending David walks out on the group leaving Mark hiding under the table, alone but engrossed in a game of hide and seek.  The head of Ganesh rests above him on the tabletop.  As the figure of Mark shifts and turns in this tiny table frame reminiscent of Hitler’s bunker, within the vast black space of the theatre, it seems to evoke – in a magical and breathtakingly simple image – the loneliness and fate of humanity, the long history of cruelty against the vulnerable, and the temporary distraction of play.