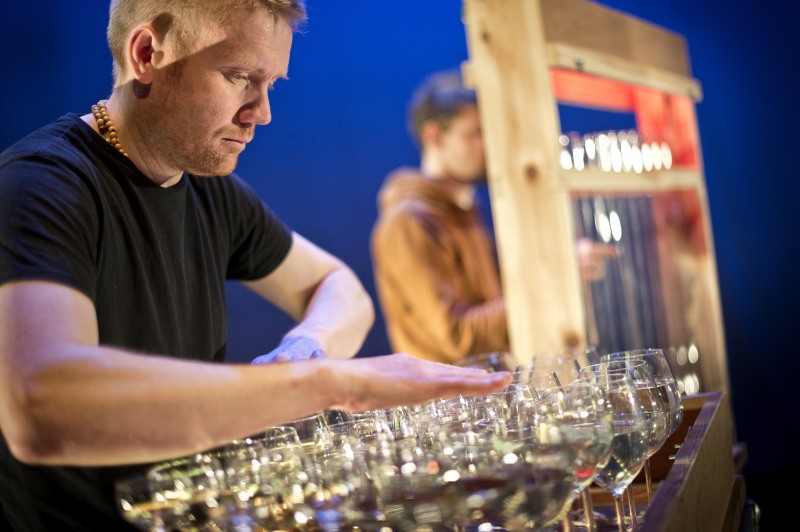 Alessandro Baricco’s novel Lands of Glass is brought to the stage by Unfolding Theatre in this spellbinding production, containing charming storytelling, enchanting singing, and a whole orchestra made entirely of glass.

Set in the fictional town of Quinnipack, Lands of Glass is an intricate tale of imagination and destiny told by an incredibly strong ensemble of five. The group move through an impressive number of characters whilst singing and playing an array of glass instruments, from glass chimes to glass blocks, bowls, vases, and glasses.

The piece starts with Beccy Owen, our narrator, singing in a silky voice whilst layering vocal parts through megaphones that are handed out to the audience. This originality in the use of sound mixed with audience interaction is refreshing and does well to engage the audience throughout the piece.

The performances are excellent, confident and assured, we are quickly pulled into the intriguing atmosphere of the town as we are introduced to its curious inhabitants along with their dreams and their pursuit of destiny. Then one by one the glass instruments appear, and their presence onstage is as magical as the sound they emit. Ethereal and beguiling, they are the perfect accompaniment to the mystical tone of the script, and the designer Andrew Stephenson and their creator Brendan Murphy must be praised for their originality and technical skill.

Despite all that is great about the piece, I found it very hard to follow the intricate storyline. By the latter half of the play I was quite lost and I feel I missed a lot of narrative. The company seemed to have struggled to get what sounds like a very dense text into an hour, where perhaps a more sparse approach would have suited the Fringe better.

But in many ways I didn’t mind, I was quite content with the brief period I spent in the company of such talented performers and such a rapturous sound. Go spend some time in the magical town of Quinnipack, where great steam locomotives carry people ceaselessly towards their destiny, where each individual has a musical note all of their own, and great inventors dream of crystal palaces made of glass.