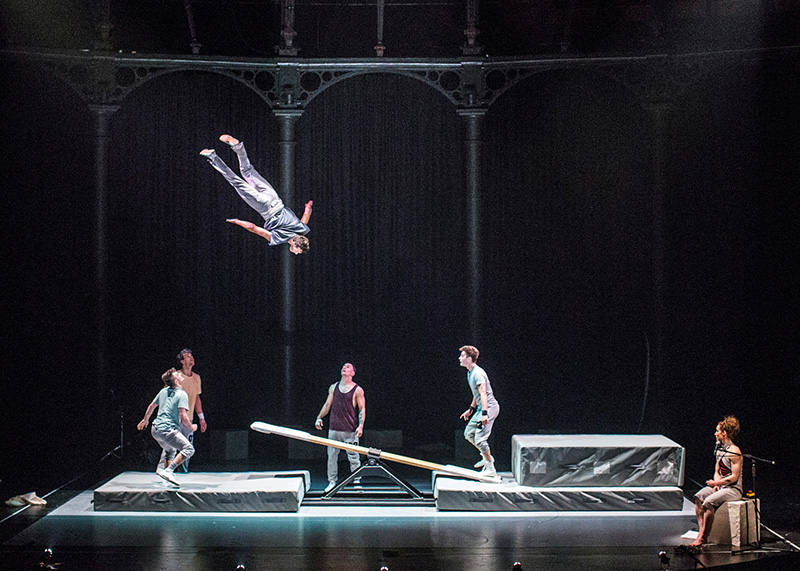 The space is packed and buzzing, haze hangs in the air. The crowd’s excitement and expectation is palpable. Barely Methodical Troupe have gathered a sizeable following since their first show Bromance at the Edinburgh Festival Fringe in 2014. Winning the Total Theatre & Jackson’s Lane Award for circus, the show ushered in bookings in abundance for an international tour that has rolled along ever since. Kin is their follow-up and the company has more than doubled in size. This time their premier headlines at the Roundhouse’s prestigious Circusfest and the pressure to deliver looms high over their young heads. The lights snap off and Let the Sun Shine blasts over the crowd. My hair stands on end, and a gleaming smile spreads across my face that persists for the next hour as towering expectations are met with a grin and a wise wink.

The lights flash up on a pile of scrambling male performers, hiding from the glaring eye of the only female performer, standing menacingly in heels and a macintosh. The audience giggle and I am entirely enamoured by the cast’s ability to be playful without being forceful, in evidence throughout. A strong and dynamic theme of the bumbling boys trying to impress our female judge as she scores them on an unknowable points system is established. Each of the six male performers is called upon to present their routine, each as whimsical and skillful as the last: from hand to hand balancing, through breaks and bum wiggling to Prince’s Purple Rain. The audience whoops with delight and I am made aware of the company’s sublime confidence to add in a tribute to the superstar at what must have been breakneck last minute speed and still manage to make this moment magic.

Other sparkling moments arise continuously throughout the rest of the show which flows seamlessly between beautifully choreographed battles. The show fuses breaking with parkour and contemporary dance to form a new physical language that is breathtaking in its ability to express and so skilfully performed that it seems to flow directly from the sinews and hearts of these performers. The return to power play between the cast, both within the male troupe and in the hard gaze of the female judge-cum-psychologist, provides an effective and fulfilling frame and a stillness that allows the movement to breathe. More and more probing questions are asked by Nikki Rummer, our female gymnast: ‘If you could escape, where would you go?’ ‘Tell me about your family.’ ‘What are you afraid of?’ These slices of vulnerable openness seem fundamental to me in demonstrating BMT’s inimitable ability to play with startling skill without getting lost in the tricks and physicality. They remain truly present and unguarded performers throughout: no moment is thrown away, they take their time and bare themselves for their audience, much to our delight.

The power play escalates, shifts, and changes, and individual routines go up against duelling pairs. Nikki is upheld as some untouchable, unknowable demi-god in a beautiful section to choral song that sees her walking skywards in spirals on the men’s heads until she is atop a three-person tower, draped in a long black gown that converts the tower beneath her into a fantastical cape of her own. I must mention the searing and completely intrinsic soundtrack here: every piece of music is powerfully eloquent and atmospheric, whilst challenging or driving the movement on stage. A brilliant example of this appears when Charlie Wheeler delivers a heart stopping cyr wheel routine to Bowie’s Five Years; the music is longing and lonely and his skill to choreograph with matching emotion in this form is breathtaking.

The show has been created with director and choreographer Ben Duke (Lost Dog) and the rhythmic influence of dance on the work is remarkable. The company play with pace and tempo, stillness and movement, space and fullness, as well as performing beautiful movement sequences. The grand finale – which sees the whole company moving in a magnificent routine of flips, acro, breaks, pirouettes and startling towers – is jaw-droppingly awesome. There are too many other impressive skill sets, including a slick sequence on a teeter board, to mention – this show must be seen to be believed. It is Barely Methodical Troupe’s ability to take pause between the movement that makes them stand out though, they allow us to savour the taste of every move, they play with us, laugh at themselves, and take their time, framing their skills with evocative emotion that lifts it beyond simply impressive tricks. A refreshing use of circus skill that blends theatricality with visual wonder.

It has been a while since I saw a show where every single audience member was balancing on the edge of their seats in readiness to jump into a standing ovation but when given a slice of vulnerable, mature, scintillating new circus there is absolutely nothing else to do. I defy you not to want to run away with the circus.