Zvizdal, the latest work by Belgian company BERLIN follows in the footsteps of Bonanza, which controversially won a Total Theatre Award, causing consternation to those who considered it to be a documentary film rather than ‘theatre’, as there are no performers (although there are visible artist-technicians). But Bonanza and Zvizdal, which are both in the company’s Holocene series of projects that focus on a city or geographical region, are most definitely theatre in my book, unless you want to call them pieces of time-based live art. Either way – what’s in a name? – the audience and the artists are brought together in a shared space, for a fixed duration of time. The unconventional set-up of the space, and the use of 3-D models and live-feed projection in the pieces cause us to continually re-evaluate our relationship between live and screened action; and between fact and fiction. Most of what we are seeing might be on screen, but the liveness of the event is vital. We are here together to witness this.

We enter the space to see a traverse setting. Two banks of seating facing each other, with an enormous white screen dividing the space, and below the screen three stations – podiums bearing models of a farm in three seasons, a green and vibrant spring/summer scene, a snowy winter landscape, and a brown and withered autumn. A kind of robot camera is poised to wander between the three scenes, and to the side a mixing desk/editing console with two people behind it.

The show starts with an on-screen white-out, and we hear what we assume is a woman speaking to various Russian officials. Her tone is cheery and determined – she is obviously not going to take no for an answer, but is always upbeat and polite. The English subtitles on the blank white screen translate for us: she needs to get a permit to go into The Zone – the area around Chernobyl that was evacuated post-nuclear disaster in 1986, and is now (allegedly) deserted. No, I can’t give you a permit. There are no permits. No one lives there. You can’t go there. Who can give me a permit? Doors open and close, steps are climbed, and eventually she gets her way. Permit granted. The journey has started. The white-out takes on texture, becomes a fuzzy snowy scene, then in a beautiful and startling moment, the screen switches to a vibrant scene of green fields, blossoming flowers, singing birds, and buzzing insects. Welcome to Chernobyl. Zvizdal, to be precise – one of a number of tiny villages within the 30-mile radius of the Chernobyl reactor.

The first shock is the abundance of wildlife. This is no desolate wasteland, it is nature run amok in the absence of farmers and tamers. The second shock is that there are people here, including the subjects of this extraordinary show, a couple in their eighties called Nadia and Petro Opanossovitch Lubenoc. I only know their names from the programme notes. On screen, they refer to each other as Baba (her) and The Old One (him). We first encounter them sitting silently side by side, slapping the flies away. Baba thinks the USA sent over all the flies. She grumbles about her aches and pains. The Old One jokes that he’s too old to run after the girls, but that in any case, he’s always been faithful to his Baba. We see them walking, painfully, around their overgrown farm. They hack at the long grass. They engage in a Beckett-esque circular conversation about whether to plant the potatoes or not. They bemoan the lack of oats, which were too wet to harvest. There is no electricity – they hoe and plough using their own (slowly declining) energy. They have one old lame horse, one skinny cow, a pig, a few chickens, a dog, a cat. There is an ongoing battle about the gate. He keeps leaving it open. She keeps closing it and securing it with wire. Oh God… she says repeatedly, holding her back. There are conversations about their daughter, who doesn’t visit very often. Their daughter wants them to leave Zvizdal and live with her. The Old One is starting to think the daughter might be right. He’s getting too old for the hammering of stakes and the milking and ploughing and harvesting of their meagre crops. But Baba is adamant. The only way they’ll get her out of there is in a coffin.

We visit them over many seasons (BERLIN went to Zvizdal numerous times between 2011 and 2016) and we see them in the midsummer sunshine and in the midwinter snowdrifts. We never see inside their house – that is the contract that the artists have with them. We are taken for a walk around the village. There’s the post office. Closed. And the community centre. Closed, overgrown. And here’s the bus stop – or at least, it was a bus stop when there were buses to stop. There is no television because there is no electricity. There are no phone lines or mobile phone signals. If you’re here, you’re here with no way to contact the rest of the world. It’s not an easy life, but for the old couple it is what they know, so they have refused to be relocated by the government. They were born here, and they will die here.

One one occasion, we are not with the old couple, we are in the car with the BERLIN filmmakers in the middle of a desolate white landscape, trees heaving with the weight of the snow. A number of men in black uniforms signal for the car to stop, and the screen goes to white-out. Then, on comes the camera again and we drive off, leaving soldiers and dogs staring after us. On another occasion it is springtime, May, and a festival day. Baba hails the passing cars, and greets the visitors to the village. A posse of old Baba Yagas in colourful headscarves and yellowing teeth exchange blessings and stories. Then everyone drives off. There will be no more visitors for another year. ‘It was OK when the neighbour was alive,’ says The Old One, wistfully.

There has been so much change. And over the years that we visit them, more things change. The horse, the cow, and the dog die. It is only a matter of time until one or other of the old people die. But who will go first, and what will the other one do then?

Zvizdal takes us right into the heart of the old couple’s story, but cleverly always remind us of the fiction, the theatricality of documentation. The cuts, the screen white-outs. The sudden loud brash music of the soundtrack. The homing in on the 3-D models, so that the ‘real’ scene is replaced onscreen by the ‘toy’ scene. Then there is another layer of artificiality, or playing with reality if you prefer to think of it that way, as the filmed footage and the filming of the model scenes are merged, creating odd onscreen hybrids. Always, we are reminded, this is theatre, this is storytelling. And of course, as is the case in all the best theatre, the Brechtian dissociations that remind us of the artificialities hammer home the truths. By detaching ourselves momentarily, we can take stock, then fall deeper into the tales being told.

It is heartbreaking, astounding, soul-enriching, beautiful work. BERLIN have once again shown us how extraordinary it is to be human; what bizarre and amazing choices human beings make in their lives. They also show is what it means to witness, to truly witness. It is the essence of theatre.

Postscript: there is a coda to the tale that you access online through a code given to you as you leave the theatre. It had me in tears… 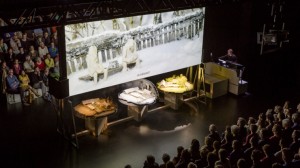 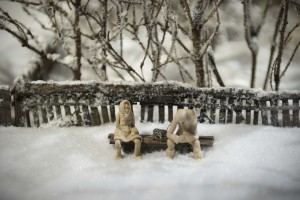