Is it a film? Is it a live performance? Neither and both: it’s Blast Theory’s Bloodyminded, ‘the UK’s first live interactive feature film’. Aislinn Kelly ruminates on the interplay between the live streaming of a single-shot film and audience interactivity; and reflects on how the commemoration of WWI conscientious objectors plays out in this 14–18 NOW commission

The Screen Actors Guild defines a feature film as one running at least 80 minutes. The British Film Institute is more generous in its guidelines, stipulating that pictures need only be 40 minutes long to qualify as features.

Whichever authority we prefer, we can be sure that Blast Theory’s latest project, an interactive film, Bloodyminded, comfortably meets its guidelines since it runs just over 80 minutes long. As for its interactivity, I engage with this film not by making decisions that change its ending but by communicating with, confessing to, a disembodied voice—a voice that is ‘live’, that can respond to me, even say my name.

Sitting in the Attenborough Centre for the Creative Arts (ACCA), one of the venues to which this film is being simultaneously live-streamed, I am asked by the narrator to consider when I have been violent, how old I was when I first challenged an injustice, and what cause I currently need to support. Each time a question is posed, I quickly open my mobile phone to access Blast Theory’s website and type out my answers before I run out of time. If I miss my moment to speak up, the live-stream moves on without me. It is already late afternoon. The live-stream started late. The actors and crew do not have any time to waste. Successfully completing this feature film is not about exceeding an abstract run-time but rather about finishing a story before the setting of the sun.

While Bloodyminded appears to fulfil its promotional claim to be ‘the UK’s first live interactive feature film’, each watching opportunity occurring in the aftermath of its live premiere unravels not only these advertised ambitions but also the artificial scarcity of it being available for ‘one night only’. Rather than an interactive and ephemeral ‘once and once only’ commemoration of conscientious objectors to the First World War, a performance that passes through but is not kept by the medium of film, Bloodyminded becomes fixed and reproducible by the recording, made available online from 28 October to 11 November 2018 and re-screened at ACCA before a behind-the-scenes Q&A on 29 November.

The longevity of its seemingly unplanned afterlife is not the only aspect of this filmed performance that disrupts time. At a technological level, the 14 October live-stream is affected by transmission difficulties that introduce dead space into the narrative and camerawork, which is meant to be one continuous shot: a black or frozen screen every few minutes, cut audio — the live production staggers towards its end and is experienced as disjointed and interminably long. Time disintegrates during the broadcast as the stream disconnects and alienates the audience from an experience of the film’s ‘real’ time, which falls further out of reach with each haunting revival on the personal or cinematic screen. Short but frequent breaks in the stream add up to a longer run-time and a disgruntled audience that cannot keep a hold of the emotional thread of this centenary piece. Some viewers may try to rescue the film from its technological problems by reading the interruptions as accidental but effective examples of formal traumatic fragmentation, but such appeals to this form of bearing witness do not prevent many audience interactions in the moment from being facetious and frustrated. Authentic responses, to be sure, but not productive ones. 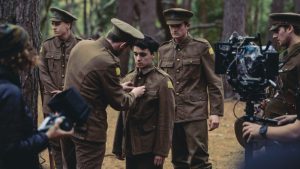 I can appreciate the continuous long shot of Bloodyminded when I return to ACCA for the behind-the-scenes event. The camera skilfully moves through time as it traverses the forested army base that is Blast Theory’s stage, telescoping the century between the conscientious objectors Harold Steele and Walter Roberts and Harold’s fictional descendants: SJ, a digital activist, and Sid, a sergeant posted at the army base. Intent on breaking into the army base to bury her great-grandfather Harold’s ashes next to Walter — who died of pneumonia on a starvation diet — SJ is trekking through the woods when the camera swivels away from her, panning through time to find the two conscientious objectors amongst the trees. They reject the uniforms three soldiers button over their passively, then actively, resisting bodies.

The uniform, rejected in that instance, and the temporal disruption in space recall another of 14-18 NOW’s commissioned pieces, Jeremy Deller’s We’re Here Because We’re Here, in which volunteers appeared in WWI uniforms throughout the UK on 1 July, 2016, unexpected apparitions in the modern landscape. The confluence of dates allows embodiments of soldiers killed on the first day of the Battle of the Somme to return in urban performance.

Conventional commemorations also employ such ghostly soldiers. Three figures in period uniforms stand like statues inside the memorial, heads bowed, during the Brighton & Hove Act of Remembrance on 11 November 2018. Members of the bonfire societies march in WWI uniforms through Lewes on Bonfire Night, and as recently as 24 November I have seen men in the drab woollen uniforms in the Lewes Tesco.

In this instance, in the woods, Bloodyminded works with and against the visual and performative tropes of WWI commemoration to great effect. Harold and Walter are not silent testaments of a past we think we already know; they declare out loud their refusal to cooperate with the war effort as they remove the uniforms. Here, too, is a tacit refusal to cooperate in conventional commemoration. If only this had carried through the rest of the performance.

The camera sutures the past and present together, a visual rendering of the affinity between SJ and Harold, who confided his story of conscientious objection and imprisonment in his great-granddaughter when she was young. He continues to speak to and about her—tenderly acknowledging that she has been the ideal witness to his testimony. Though SJ cannot hear his voiceover— his reply to her monologues — there is more connection here than in the mobile phone calls she conducts with her mother. These calls occur at inopportune moments throughout the performance and are little more than weak expositional devices. A much stronger use of communication technology comes later. The chilling nonchalance of the corporal’s soliloquy lingers with me. Speaking into a headset to an unknown and unimportant listener, he casually reminisces about a youthful act of violence, voice dipping in and out of fascination and confusion as if he cannot quite connect the movement of his body and weapon with the wound that opened before him.

SJ’s brother Sid also speaks to Harold. Even more so than SJ, who is overflowing with regard for their great-grandfather, Sid overflows with words for him as he grapples with the exhaustion and exhilaration of institutionalised violence. The realisation that they both speak to Harold facilitates communication and reconciliation between the siblings, who represent two types of young people at cross-purposes. Bloodyminded is thus an example of the way the past is instrumentalised by commemorative projects to serve the needs of the present.

Later, during a reprieve from the belligerent and seemingly pointless exercise of running through the base, SJ crouches by her brother’s supine body, appearing as if summoned to bear witness to his pain just as she had been drawn to listen to Harold’s account as a child. An affecting moment and turning point in the film. When SJ live-streams the burial of Harold’s ashes, she cannot complete her prepared speech because she can no longer accuse her brother of cowardice.

Harold Steele’s particular resistance to military involvement is lost as the film tries to forge channels of communication between young people whose politics and traumas have constructed seemingly insurmountable differences. SJ’s — and thus the script’s — concern for diction fades as she comes to the close of her live-stream. At the conclusion of her speech she says, ‘I salute you, great-granddad’. ‘Salute’ jars in this context. Though she does not accompany her words with a gestural salute, the word alone involves Harold in a military language and structure in which he wanted no part. Though its form is novel, Bloodyminded cannot break with a conventional militarised understanding of hierarchy, respect, and remembrance. The trappings of the army are forced back on him; Harold’s ashes are interred where he was imprisoned. Is there no end to the sentence, no escape?

After the 29 November screening, I come away from Bloodyminded knowing that it is an admirable achievement in coordination and camerawork, but as an interactive artwork and narrative bearing witness to conscientious objectors, it talks itself into too many corners, folding absolutists into the military discourse they rejected over a hundred years ago. The ostensible ephemerality of this film is a step towards reimagining the form of commemorative artworks — though it suffers from indecision about whether it is transient or monumentally ineradicable — but it leaves me still searching for a different commemorative language.

Aislinn Kelly attended the live stream of Blast Theory’s Bloodyminded at the Attenborough Centre for Creative Arts (ACCA) on 14 October 2018; and the subsequent re-screening and Q&A at ACCA on 29 November 2018.

For full details of ACCA’s past events and the Spring 2019 programme, see www.attenboroughcentre.com

Blast Theory’s Bloodyminded was created and presented as part of 14-18 NOW, the UK’s arts programme for the First World War centenary.