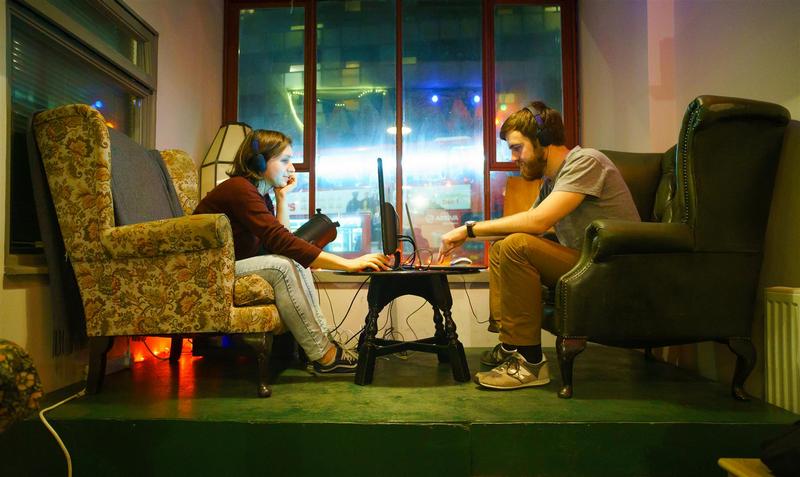 It’s been more than five years since the first Beta Public in 2013, reviewed in Total Theatre by Sophie London. Now, for their ninth showcase at Camden People’s Theatre in North London, theatre director Thomas Martin and video game producer and curator Pat Ashe return with more carefully curated games (Ashe) and theatre (Martin) that are deemed to occupy the liminal space between the two forms and presented here, it would please Sophie to note, with both identification and instruction.

After receiving the six of diamonds playing card that was my ticket (perhaps the venue has a capacity of 52? – near enough. Ed.), Martin got the evening started by vigorously ringing a bell to get our attention, making a wry masturbation reference that set an informal tone before giving us a screed detailing what was to come (no pun intended!). Beta Public compares and contrasts video games that are in some way theatrical in their execution with theatre that uses games as either a narrative crux or structural impetus. The first hour is given to free-roaming play of the games, all of which were framed by A4 sheets noting the artist, title and play instructions. Since the games can’t be played by everyone at once, it becomes natural to alternate between spaces, picking the right moment to engage or simply observe.

In the bar area, Nicole He’s ENHANCE.COMPUTER competed with the music and din of the room, not ideal for a game controlled by voice input. The basement housed four further interactions: Pretzel by Tim Snowden, where a tablet is used to guide player movement in an extension of the classic Twister concept; Flight Simulator by Hosni Auji, a hilariously literal simulation of sitting in your seat during a flight; Un Pueblo De Nada by Cardboard Computer, whose dual presentation of TV chat show and game manipulated in parallax I am still puzzling over and Octopad by Patrick LeMieux, an eight-player reimagining of old-school Tetris. Moments after arriving in the basement space I got a weird error message on my phone, which has never happened before. It’s testament to the experimental environment of Beta Public that my first thought was that it was part of one of the games, hacking my device to give me pause.

At 8pm, the crowd is ushered into the theatre space for a series of discrete experiments, ranging from works-in-progress to rehearsed performances. Emergency Chorus used two audience members as avatar-like doppelgängers via mobile phone in a performance called You Have Reached Emergency Chorus. Roderick Morgan presented a world of their own, a talk explaining his views on immersive theatre and XR (extended reality for the uninitiated, technology combining real and virtual environments in various configurations). To conclude the event, OLIOTRONIX performed live, rocking the auditorium using a modded Nintendo Game Boy as a musical instrument.

In amongst the above and rounding out what Martin calls his ‘four curatorial pigtails’ approach to variety, where the idea is to mine different interdisciplinary approaches to the games/theatre dichotomy, Trip Hazards theatre company showed us a scene from the charming, intentionally awkward and faux-unrehearsed Progress, which they went on to perform in full just a few days later for CPT’s The Shape of Things to Come work-in-progress programme. Using the vintage party-game Dance Dance Revolution, initially a hit in the arcades and later released for the home market, as a narrative anchor, Progress tends towards a formal portrayal of a young couple’s relationship dynamic. The company’s stated intention to provide fresh, innovative experiences is backed up by this Let’s Play (footage of someone playing a video game) inspired mash-up of theatre and YouTube.

Games differ from old media in that they can easily become a start, or at least middle point for making something else; platforms for additional content. I think theatre, in this context, can do the same. In competitive, social games there is no final page or closing credits, only the promise of repeat play. Playing can be a performance in its own right and performances can have the unpredictable quality of a game. There is potential here for theatre to plug in to this iterative, procedural rhetoric and make something unburdened by the typical restraints of the stage. In a true melding of worlds, I also wonder if the structure of the evening itself can further function as a meta-commentary, game or theatrical intervention? Nevertheless, this was a pleasingly square line-up of nine unique works on the ninth edition of this packed and popular event.