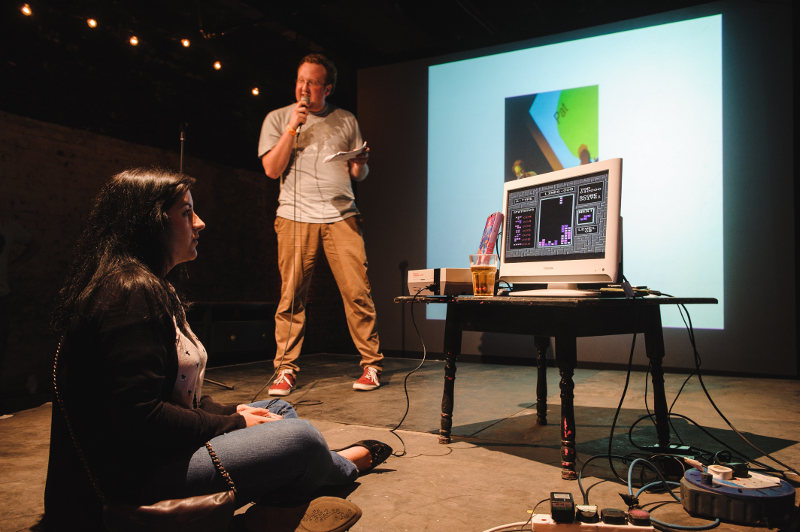 Beta Public was a two-pronged thrust at exposing the underbelly of what computer games could mean in the world of theatre. The evening began below stairs with a loosely curated exhibition of video games on various devices, with creators hovering by, and culminated in a short programme of demonstrations and discourse on what gaming could offer to contemporary theatre and vice versa. The focus was on simple single and two-player games with all participants in the same place, rather than on online multiplayer shoot-em-ups or more advanced game worlds.

A number of variously abstract and offbeat low-tech computer games arrayed around the (overly) darkened basement of Camden People’s Theatre, without identification or instruction, were left for the punters to wander warily amongst. Some, such as Ervax For 2 and Icefishing V, I was reliably informed by my gamer companion, had far superior competitors already on the market and in the oblique space they were distractions more than attractions. Icefishing V takes the player through a very abstract virtual landscape where each perspective generates a sound and each action taken by the player affects those sounds. It is more about the journey than the destination, listening to what you create and playing with the interaction between virtual environment and soundscape, but this can be frustrating to anyone used to playing narrative games with a clear objective to achieve, and baffling to musicians who could reasonably expect to have far more control over the order and arrangement of sounds they are creating. For me (meeting neither of these descriptions) there just wasn’t enough to hold my attention – the visuals were too rudimentary and the sounds too conceptual to make either satisfying. From a programming perspective it was an achievement, but unfortunately it fell down in delivering player experience.

Similarly, Ervax For 2 allowed players to create ‘compositions’ by flying their avatars through space and ‘catching’ notes and rests. The speed of play and clumsiness of the controls, however, meant that each player simply had to grab what they could without planning the final effect. The final round pitted each composition against each other as you had to protect what you had fashioned whilst trying to ‘silence’ your opponent by shooting laser rays or somesuch into their composition/ship. It made for a diverting few minutes, but my companion put his finger on the shortfall when he said that he’d had too little control over his composition to care about defending it. The level of player investment in what they are achieving is really what was overlooked in the interests of pursuing an artistic ideal in many of the offerings at Beta Public.

The satirical and pleasingly lo-fi Art Game did not fall into that trap however. Played on an ordinary PC, with basic keyboard controls, the participants were invited to play very simple versions of classic and cult arcade games Computer Space (an insider’s nod to gaming aficionados I’m told), Snake and Tetris. The process offered some meta-commentary by using the end frame (the point at which, traditionally, the player has ‘lost’ the game) to create modern art installations – subverting the purpose of the games by emphasising the space and arrangement of pixels, rather than the concepts they represent. The faux-cerebral critiques of the gallery visitors within the game provide another layer of wit, yet conversely lend genuine value to each creation for the player – the reward being a comment that allows us to laugh at the fallacy of ascribing value to some arbitrary shapes but not to others. A very satisfying addition to the evening, though the performative element is really only for the players themselves, not for an audience.

One of the pleasures of gaming conventions, for example, is the opportunity to observe masters at work, and after some spirited if chaotic attempts at playing A Bastard, in which players jump around on a life-sized QWERTY keyboard to direct and shoot their onscreen figures (projected onto the wall) I found it far more entertaining to watch two accomplished players chase each other both around the screen via avatars, and around the board, deliberately stepping in each other’s way to thwart winning manoeuvres. This very literal demonstration of Gaming As Performance could easily integrate into performance festivals and interactive spaces.

After an hour of unfocused playing, with much emphasis on the ‘sound’ and ‘virtual environment’ and less thought invested in the ‘game’ aspect the audience were corralled into CPT’s main studio space for Beta Public’s formal presentation. It began with an initially promising but ultimately gauche attempt to splice abstract video gameplay and spoken word. A novice was called up from the crowd to play fan-favourite soundscape creation game PROTEUS, while curating artist Pat Ashe read a pre-prepared narration. In the hands of a practiced improviser, or with more engaging prose, this could easily have been a very pleasing little interactive performance, however it fell short of the intention, with only momentary congruity between the gameplay projected on the back wall and the recitation. Exiting the game before (I have on good authority) its transcendent climax also robbed the performance of potential narrative completion.

Thomas Martin followed this up with a brief lecture on the performative nature of video gaming, illustrating his talk with YouTube clips and briefly mentioning the value of live interactive games like Cello Fortress. He touched upon the idea of ‘gaming as performance’ with YouTube videos of exemplary play gaining millions of hits, some examples showing off the gamer’s prowess even at the expense of actually winning the game. There was a lot of food for thought here but none of the ideas were explored thoroughly enough for the audience, who all appeared au fait with either gaming or performance already. Should this event spawn others, however, there are fascinating ideas to be explored which could contribute an exciting new aspect to interactive and multimedia theatre. A very good turnout suggests there is definitely an interest in this new thread of performance discourse.

The evening finished with a frenetic and hilarious live demonstration of Spaceteam a ‘cooperative’ multiplayer touchscreen game in which players have to direct each other, via the medium of SF technobabble, to perform demonstrative tasks on their respective devices in order to keep their ship travelling through hazardous outer space. The four participants dressed the part and added commentary on their playing experience so, even though we were unable to see what they were seeing, the picture was painted so vividly that it was as entertaining as playing the game ourselves. It might not work as more than a brief aside amongst more weighty contributions, but it was a fittingly engaging high note to end an evening which promises – with a little more thought, particularly to the audience experience – to generate a challenging new voice in the experimental theatre discussion.